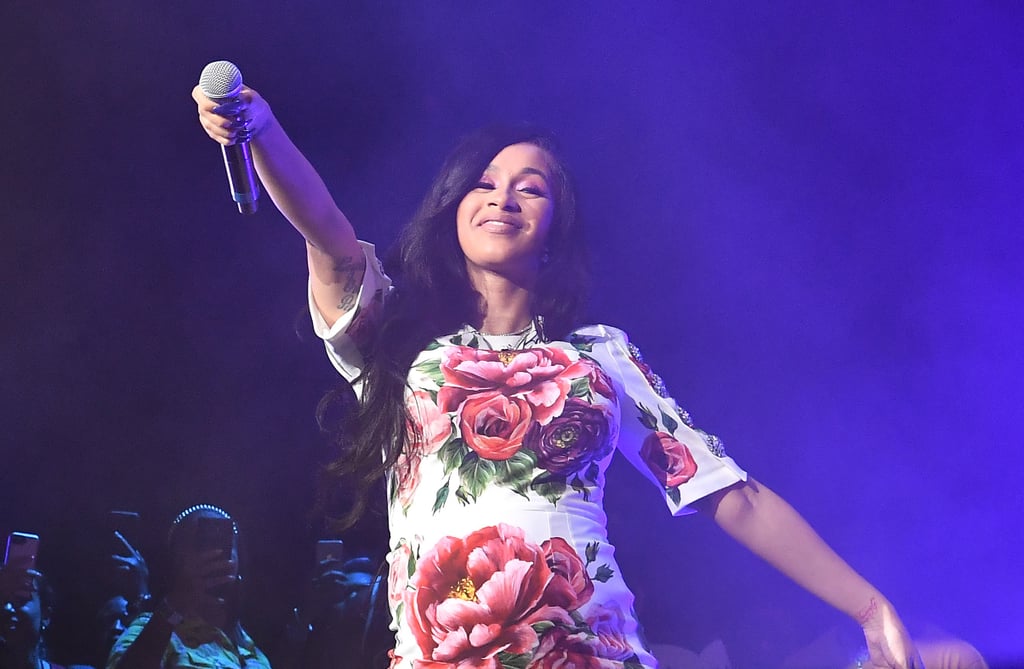 Cardi B Isn't Going on Tour So She Can Spend Time With Her Baby, and Damn, I Respect That

Cardi B was a fairly new name and face by the time she announced her pregnancy in April, and while her music isn't the type I typically gravitate to, I can't deny that her take on motherhood so far hasn't made me a fan. Following the success of her collaboration with Bruno Mars on his supercatchy song, "Finesse," Cardi was meant to be joining him on his "24K Magic" tour this September. However, less than three weeks after giving birth to her daughter, Kulture — whom she shares with fiancé, Offset — Cardi has made the decision to drop out of the tour to be with her baby girl; and damn, I respect that.

Cardi, who revealed after her daughter's birth that she wouldn't be hiring a nanny because she has a lot of support from her family, has been open about wanting a chance to take on the rawness of new motherhood. "I just want to learn how to be a mom, and I want to enjoy every single second of it since I'm going back to work. I'm just really grateful," she said in an Instagram video. So though it's a surprise to many that the "Bodak Yellow" singer would choose to back out of such an epic tour with Bruno Mars, no one in the parenting community should be too shocked.

Related:
New Mom Cardi B Pulled Out of Bruno Mars's Tour, and His Response Was So Adorably Supportive

I'm not a mom yet, but it's always been my fantasy that once I had kids, I'd stay home with them until they were all in full-time school. That's likely not going to be an option for me financially, nor is it for many other new parents (plus, not every new parent even wants that, which is also cool), but it's why Cardi's decision to appreciate the blessing that is being able to stay home with her baby is one I highly respect.

"I think I underestimated this whole mommy thing."

"I thought that after giving birth to my daughter that six weeks would be enough time for me to recover mentally and physically," Cardi wrote in her announcement on Instagram. "I also thought that I'd be able to bring her on tour with me, but I think I underestimated this whole mommy thing. Not only am I just not ready physically, I'm not ready to leave my baby behind since the doctors explained it's not healthy for her to be on the road."

Other musical parents, like Pink and Justin Timberlake, have recently taken their families out on tour with them, but their kids aren't quite as young as Kulture — nor is Pink still recovering physically from giving birth as Cardi is.

Although Cardi admits that this has been the "hardest decision to make," she says she has to do what's best for her and her baby, which is so relatable to any and every parent out there. The newborn and infant stages are so fleeting, I hope Cardi enjoys every kiss and snuggle with that precious new baby — she can be a boss on stage again when she's ready.

Related:
Looking to Catch a Glimpse of Cardi B's Baby? You're Going to Have to Wait!
Previous Next Start Slideshow
Bruno MarsParentingCardi BNewbornOpinion

Music
From Selena Gomez to Taylor Swift, the Most Anticipated Albums of 2023
by Chanel Vargas 2 days ago