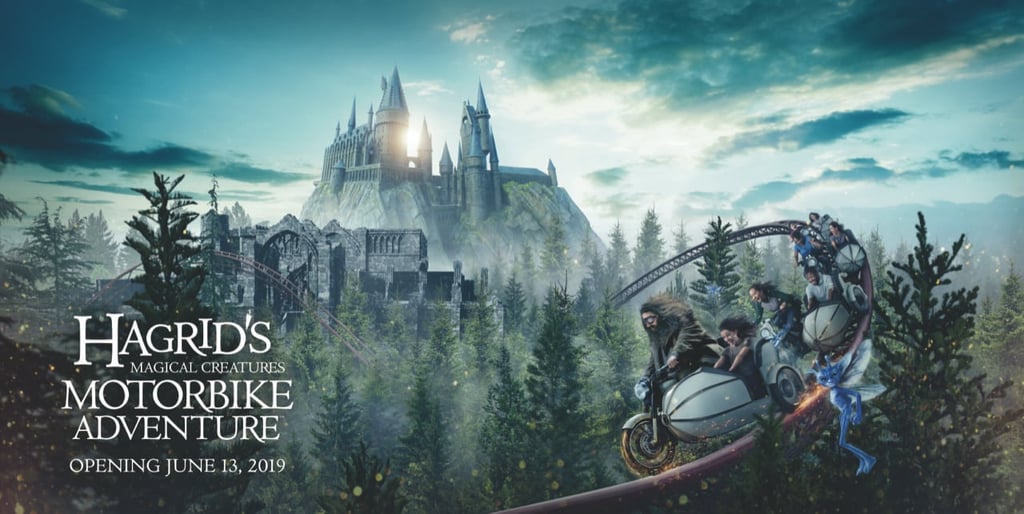 Hold onto your broomsticks, because Hagrid's Magical Creatures Motorbike Adventure is finally open at the Wizarding World of Harry Potter! The brand-new attraction takes park-goers on an "immersive" and "thrilling" roller-coaster ride that twists, turns, and plunges forward (and backward!) through the Forbidden Forest.

Located in the Hogsmeade area of Universal Orlando Resort, the attraction seats riders on either a motorcycle or adjacent sidecar, which together are designed to look like the old-school motorbike that Sirius Black left Hagrid. The ride soars among more than 1,200 live trees at speeds up to 50 mph, bringing guests into contact with some of the wizarding world's rarest magical creatures, including Centaurs, Cornish Pixies, and Fluffy, the three-headed dog — all with Hagrid as the trusty guide. Oh, and fun fact: the coaster has more "launch points" than any other one of its kind in the world!

Related:
How to Have the Ultimate Harry Potter Day at Universal Orlando

Hagrid's Magical Creatures Motorbike Adventure officially opened on June 13, joining other Wizarding World attractions, such as Harry Potter and the Forbidden Journey and Harry Potter and the Escape from Gringotts. From the looks of it, the ride is already yielding hours-long lines, to the surprise of no one. Keep reading to get your first look at the fast-paced ride and the creatures that'll be hiding inside the attraction. Bloody hell, we can hardly contain our excitement!

Beauty Reviews
I Tried This Beauty Fridge From Target, and It's 100% Worth the Hype For Skin-Care Lovers
by Macy Cate Williams 1 day ago

Decorating Tips
This $30 Hanging Wall Shelf Is So Versatile, We Styled It 5 Ways For Different Rooms
by Tara Block 2 days ago

Disney
Here's Your First Look at Halle Bailey as Ariel — Complete With the Mermaid Tail!
by Monica Sisavat 3 days ago

Nostalgia
This Disney-Inspired Wedding Is Absolutely Magical — Just Wait Until You See the 3 Princesses!
by Lauren Harano 4 days ago