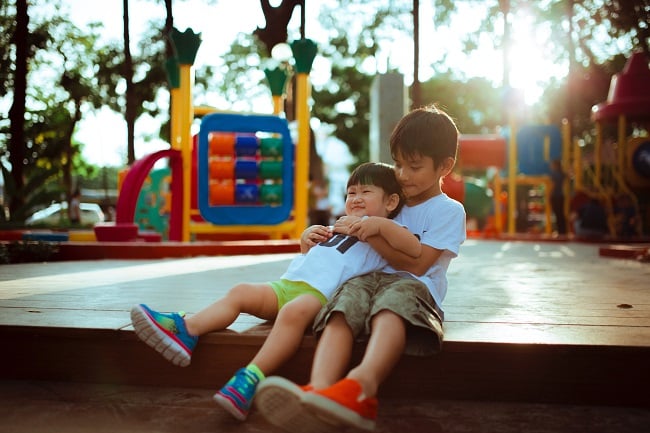 While my children enjoy the activities of the park, I people watch. I make sure my children are safe, but I also observe the interactions of others in the park. On this Saturday, all the benches were taken, so I slid my magazine into my purse, stood back, and watched my two boys play. I quickly scanned the park and noticed dads scrolling on their phones, moms talking to each other during their children's play dates, and energetic children transitioning from the slides to the swings.

My youngest son called to me and waved from the top of the slide. He waited for the child in front of him to slide down, and then took his turn. As my son slid, though, the other child began to climb up, and their collision ended in tears from the climber.

This has happened to my son before — I've wiped his tears and reminded him to let other kids use the slide when his turn is done. Typically, after a slide-kicking accident, the parents lock eyes and mutually agree that their child is either sorry for kicking or OK after being kicked by the other child. But that's not what happened with the mother of the slide climber this time.

Related:
The 12 Parents You Meet on the Playground

We obviously didn't study the same playground rules guide. This mother ignored my "I'm sorry" wave and instead charged toward my 3-year-old son. As the mother approached, I stepped closer to ask if I could help her. "Your son's a terror," she yelled at me. "He just kicked my son." Excuse me? She chose wisely and did not repeat her comment, allowing me to give her a play by play of what transpired on the slide.

"You know what? You are a bad parent!"

I was certain I had defused the situation by recounting what happened when she responded by saying I needed to tell my son not to follow so closely on the slide. I glanced at the woman and her son, who up close appeared to be twice the age of mine. "That wasn't the issue. Your son climbed up the slide and was kicked," I responded. "I'm not sure what my son could have done to prevent this outcome." Her response? "You know what? You are a bad parent!"

That made two insults, one for me and one for my son, all because of my 3-year-old's attempt to use the slide at the playground. I could feel my blood boiling. Here is a woman who doesn't know me, didn't see the incident, and yet dares to judge my son and my parenting skills over a non-life-threatening sliding collision. I looked over to see my two sons staring at me.

As calmly and sternly as I could, I told the woman that she had no right to judge us and that instead she should talk to her child about the dangers of slide climbing. To keep this conversation from further escalating, I let her know I was ending it. The words, my tone, and my face were enough to get her to move on. Without another word, she left the park with her son.

Related:
How to Deal With Mama Drama

I found myself standing the playground suppressing tears of anger and feeling bad for my child, who had to witness the interaction and hear someone call him a "terror." My family's character and parenting skills were questioned. Another child's inability to tell his mother the role he played in the incident led to this, but my child was also affected.

As a mother, I understand the other mom wanted to protect her son, but I wish she wouldn't have allowed for that protection to border on harassment toward mine. On the drive home, I thought of all the things I should have said and even questioned what I could have done differently. My son and I will never receive the apology we both deserve, but at the end of the night and after seeing me deal with the situation, my kids told me I was a great mom — and I'm positive the child at the receiving end of my son's kick thinks the same of his.