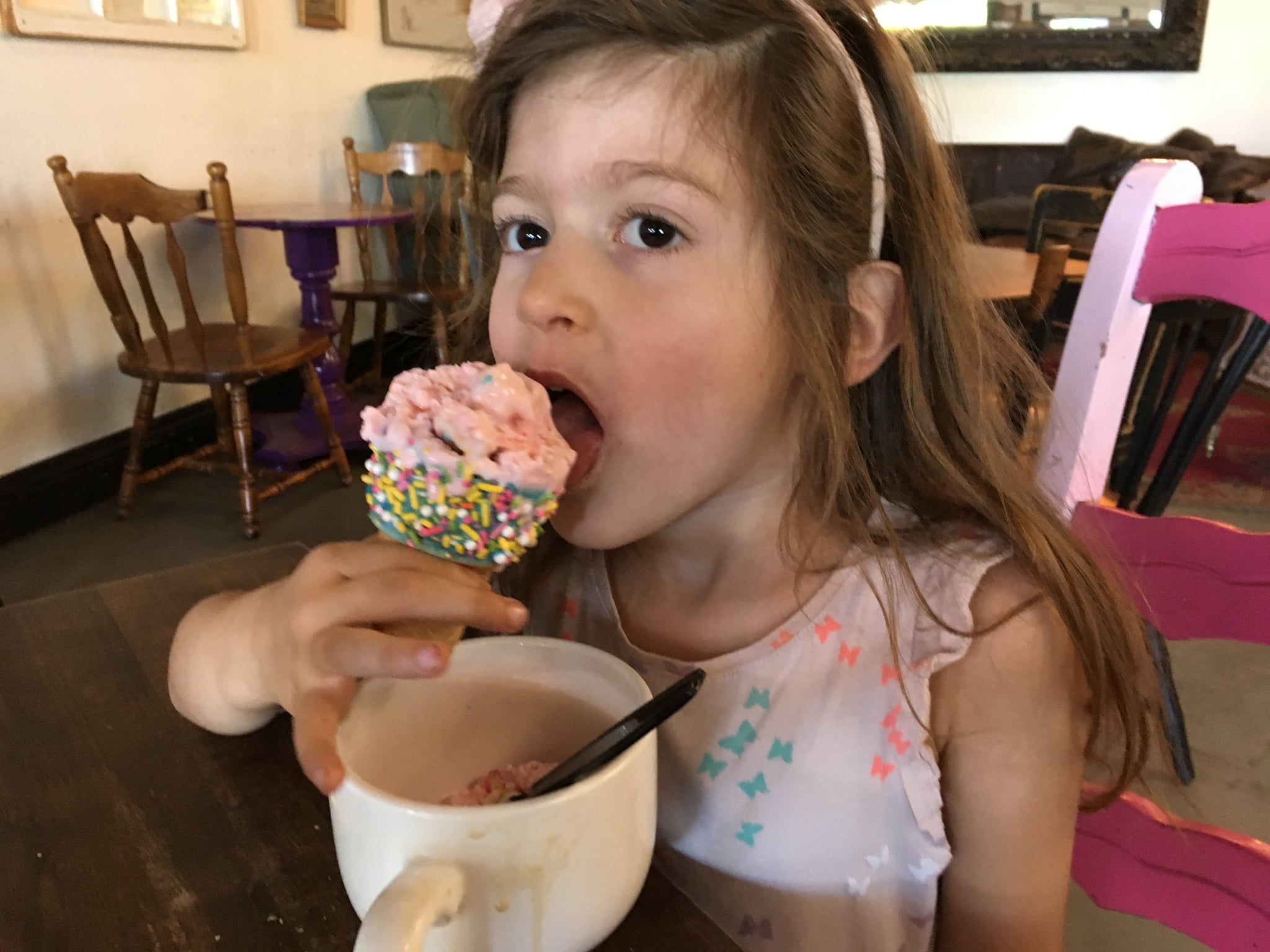 I was randomly surfing the internet when I stumbled upon a photo of Jennifer Garner on Instagram. The mother of three looked positively exhausted in a makeup-free selfie, where she explained she had just celebrated "Yes Day," an annual tradition in her house inspired by the book of the same name by Amy Krouse Rosenthal, where she says yes to her kids — no matter how outrageous their requests — for 24 hours.

I have to admit, I was immediately intrigued. I say no to my children so much that when I do utter the word "yes," I shock even myself. "No, you can't have candy for breakfast. No, you can't play video games on my iPhone. No, you can't have a story because you took too long getting ready for bed." What if, instead of constantly saying no, I gave myself a day off from adulting and said yes instead?

I had been toying with the idea for months, but I didn't actually work up the nerve to try "Yes Day" until late March. My kids — Max, 7, and Zooey, 5 — were beyond excited when I told them the news. They whispered back and forth for days, planning all of the fun-filled activities they could dream up for their free-for-all agenda.

My daughter asked for candy for dessert (yes, dessert after breakfast), which I agreed to despite the "No!" voice screaming inside my head.

At long last, and after lots of anticipation, the big day finally arrived. I was a little nervous that my nice home and well-behaved kids would be things of the past before bedtime rolled around, so I decided to set a few ground rules to keep my sanity intact. First, nobody was allowed to skip school. Second, no trips anywhere more than an hour away. Third, they couldn't spend over $50 dollars. Other than that, the sky was the limit!

Thankfully, my kids' first request was a small one. They wanted Trader Joe's chocolate croissants for breakfast. I usually only serve them healthy foods like yogurt or smoothies, so they couldn't wait to get their hands on the chocolatey treats and inevitable sugar rush. My daughter even asked for candy for dessert (yes, dessert after breakfast), which I halfheartedly agreed to despite the "No!" voice screaming inside my head. I decided if I couldn't beat them, I might as well join them, so I grabbed a plate, sat down, and dug into one of the gooey treats too.

After we had literally licked our plates clean, my son headed off to school while my daughter got ready for a play date. Since it was "Yes Day," Zooey had graciously agreed to me taking a Pilates class with a friend that morning, while she and my workout buddy's daughter played at the Kid's Klub. We both had a blast spending time with our friends, so it was a win-win for everyone.

After we hit the gym, Zooey asked to go out to lunch, so we headed to her favorite kid-friendly restaurant. In between bites of chicken tenders and french fries, she decided it was time to visit the playground. We met up with some friends a few minutes later at a nearby park, where I thankfully had a brief rest on a picnic blanket while Zooey played with her buddies. After they tired of the slides and swings, the kids ran in circles playing hide-and-seek all over the grassy area. When it was time to pick Max up from school, we said our goodbyes and headed for the car. On the way to school, Zooey asked for more candy and ice cream "for the road" so, of course, I said yes, stopping at a nearby bakery before pulling into the elementary school to pick up her brother.

As they settled in for the night, I couldn't help but think how innocent the day was. They wanted really simple things to make them happy — sugar, friends, play time, and movies.

After Max climbed into the car, he helped himself to candy followed by a dish of ice cream at home, then promptly asked if he could play video games and FaceTime with his friend Dylan all afternoon. My husband and I don't normally allow him to play video games during the week, but, really, what choice did I have? "Yes," I replied. Both kids cheered then headed upstairs to our home office to log onto my computer together. Meanwhile, I called Dylan's mom to ask if he could FaceTime, then handed my phone over to Max so the two boys could chat while they played. I then decided to kick back and relax with a new book on the couch. Hmm, this wasn't so bad. After a couple of hours, it was time to take Zooey to her first tumbling class at a nearby gymnastics studio. She had a blast practicing somersaults and doing splits, so we decided to celebrate her success afterwards. The kids begged me to order pizza and fried dough for dinner, so I called the restaurant then phoned their dad to let him know that a pizza delivery was on the way.

Once we got back home, they asked if they could watch a movie while they ate, which — you guessed it! — I said yes to before making myself a boring salad, since they both refused to share their pizza with me. After the movie ended, I started to lose steam and, at long last, it was almost bedtime. After one last request for story time in my bedroom, which I happily granted, the kids changed into their pajamas, brushed their teeth, and climbed under the covers. As they settled in for the night, I couldn't help but think how innocent the day was. There were no tantrums, crying fits over not going to Disney, or insane requests they knew I couldn't grant. They wanted really simple things to make them happy — sugar, friends, play time, and movies. And honestly, those are the same exact things that make me happy. Maybe adults should have a "Yes Day" every year, too?

by Yerin Kim 17 minutes ago