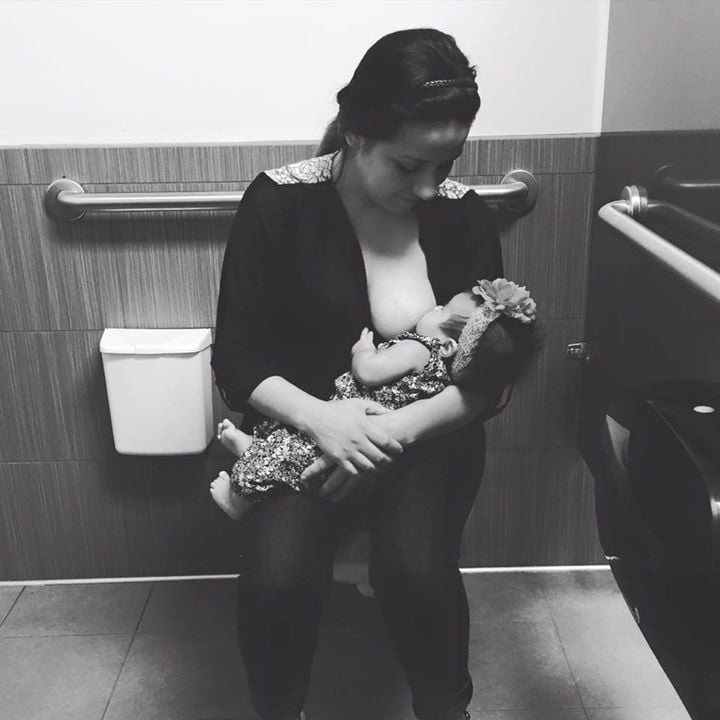 Just when you think there's no longer a stigma attached to breastfeeding in public, a mother is forced to nurse her baby while sitting on a toilet. That's what happened at a Portland, OR-area Marshalls this weekend after Karina Gomez was told by a store employee that she wasn't allowed to breastfeed in the store or even in a dressing room.

"Instead, I was directed to a bathroom stall to breastfeed," Karina wrote in a Facebook post on Saturday that has since been shared nearly 17,000 times. "What a way to treat breastfeeding customers, shaming them for breastfeeding, making them feel embarrassed that you need to feed your child. I am angry, upset, but more so humiliated. My rights have been violated."

Still, the thousands of moms who saw Karina's post weren't satisfied with the apology.

Many left angry comments, some urging Marshalls to create a pro-breastfeeding policy like the one Target has in place, which was leaked back in July.

Marshalls released a statement to local KGW News, which made clear that such guidelines — save for this instance — are already in use:

"We have a breast feeding policy in place which instructs associates to allow customers to breastfeed as they choose within stores. We have looked into this matter and regret that it may not have been followed in this instance. We have asked the customer involved to reach out to us directly so we may resolve the matter and again, apologize for any inconvenience."

Even that hasn't stopped those moms from seeking to normalize breastfeeding. A local group has planned a "nurse-in" protest at the Marshalls Cascade Station location in question, which takes place today.