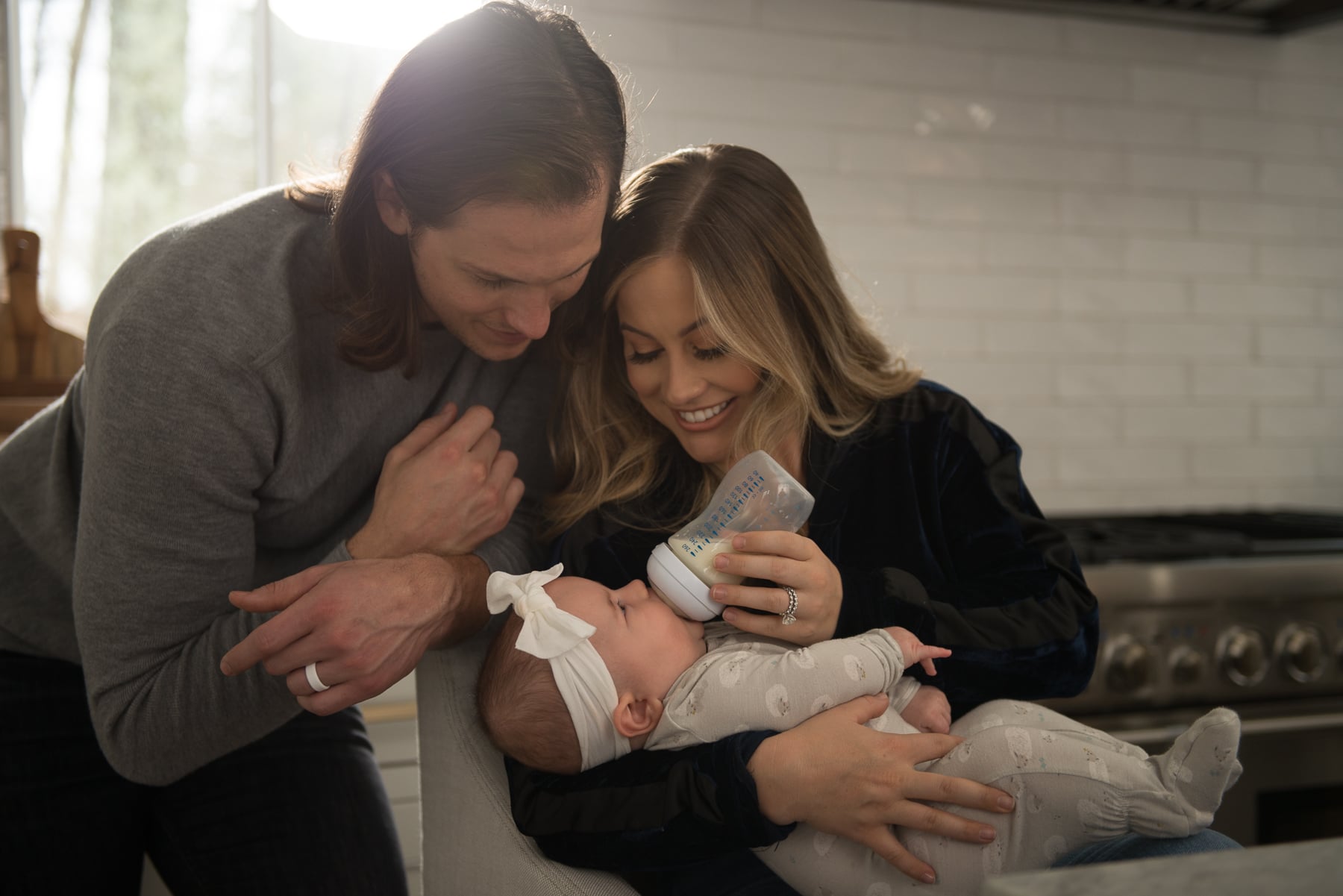 For Olympic gold medalist Shawn Johnson, going into every situation with a solid plan is paramount. But since she welcomed her daughter, Drew, with husband Andrew East in October 2019, the first-time mom has learned that when it comes to feeding babies, most plans end up going right out the window. We spoke with Shawn and Andrew about Shawn's experience with supplementing with formula, their partnership with Enfamil, and the importance of rolling with the punches as new parents.

Determined to exclusively breastfeed her newborn, Shawn was heartbroken when she struggled to produce enough milk. The couple realized something needed to change when Andrew found Shawn in a "puddle of tears" on the nursery floor late one evening. The couple hired a lactation consultant, but Drew was still having trouble latching and Shawn was becoming frustrated.

Related:
All the Photos of Shawn Johnson's Daughter Drew So Far — Including One With Her Golden Retriever Brother

To help alleviate some of Shawn's stress, Andrew began doing some research about going the formula route. "Supplementing has been awesome and has taken a lot of pressure off us," he shared. "For some people it's a choice to formula feed and that's fantastic, but we didn't really have the choice. We needed to start incorporating formula, and just to know that there's an awesome option out there puts us at ease."

Although Shawn knew that formula was the pragmatic option, she wasn't exactly excited about the idea of supplementing until she had a meaningful talk with her mom. "When I was having a really hard time guilt-wise over switching to formula, I remember asking my mom: 'Mom, what do you think about supplementing with formula? Do you think I'm shortchanging her? Or potentially ruining her life?' At that moment, my mom said: 'Honey, no. Formula's amazing, you were formula fed.'"

"I don't think formula feeding is anything you should ever feel guilty about."

Not only did the retired gymnast not even know that about her own infancy, she hadn't even considered it. The revelation helped to change her mind about the taboos surrounding formula feeding. "I was allergic to breast milk, so I was 100 percent formula fed from day one, and to my mom it was a no-brainer," she explained. "To see my mom — who I idolize and who's been guiding me through the mom process — be so nonchalant about formula made me feel supported."

As for the general guilt surrounding not breastfeeding? Shawn implores moms to ignore it. "I think formula is an amazing option," she said. "I don't think formula feeding is anything you should ever feel guilty about. Again, having done all the research, I know that there are different ingredients in formula that can also be found in colostrum and breast milk. There's all these different options within the Enfamil Enspire line that cater to your kid. I just don't think moms should feel guilty for giving their kids formula. Don't stress about it."