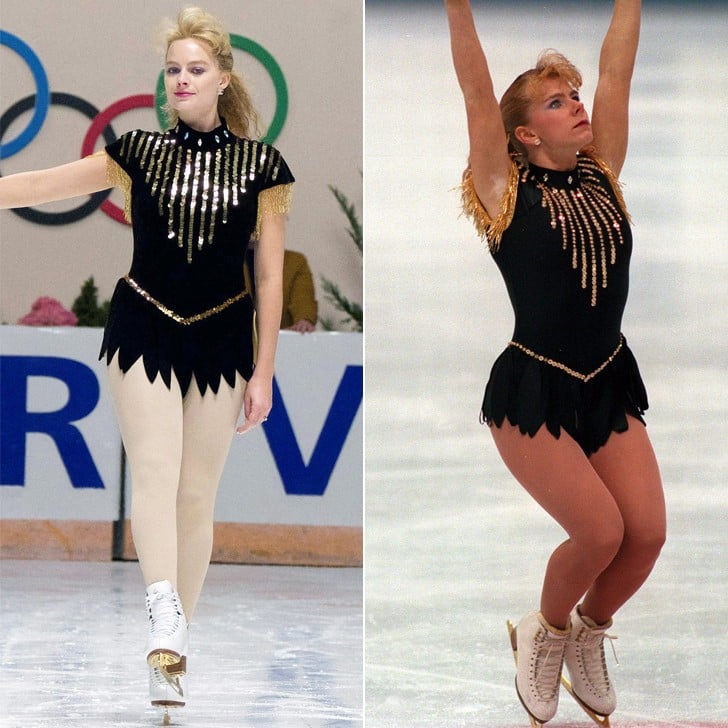 Perhaps it's because I'm a fashion gal through and through, but the one scene from I, Tonya that stuck with me most was a close-up of Margot Robbie (as former Olympic figure skater Tonya Harding) right before beginning a routine, wearing a pair of sparkling Chanel earrings. Actually, all of the kitschy skating costumes intrigued me. "Did Harding's costumes look exactly like this throughout her career, and why do they make me feel almost . . . uncomfortable?" I immediately began to wonder as I watched the film.

Turns out, the off-putting appearance of Harding's signature look was purposeful. Costume designer Jennifer Johnson very accurately displayed the ensembles Harding wore (many of which her mother LaVona sewed by hand) which judges considered to be "tasteless" or "tacky." She told Deadline:

"With Tonya, because she's a tough person, she's not afraid to voice her opinion and she does not particularly consider herself ultra-feminine, so the skating costumes were always pink and purple, and colors that were probably quite uncomfortable for her in real life. Then, she started making more money, and being able to afford her Louis Vuitton bag. She has Chanel earrings and a nice leather jacket and she's definitely more sober in her color choices as the violence escalates . . . I love that Tonya really always said, 'No. This is who I am, and please listen.' I just thought that was really fascinating. That, to me, makes her really a powerful figure in the sports world, because that world is sort of a ballet. It has so many rules, and it's sort of like cotillion, the rules of dress and behavior and how women should act."

Johnson also told Vogue that when she was introduced to Harding at a party, "She gave me a big hug and said, 'My God! When I was watching the movie I thought, how did they get a hold of my skating costumes and my clothes?'" If you've any doubt, at this point, that Johnson is quite talented, read on to compare some of Harding's most memorable skating outfits with the near-identical replicas created for Robbie.