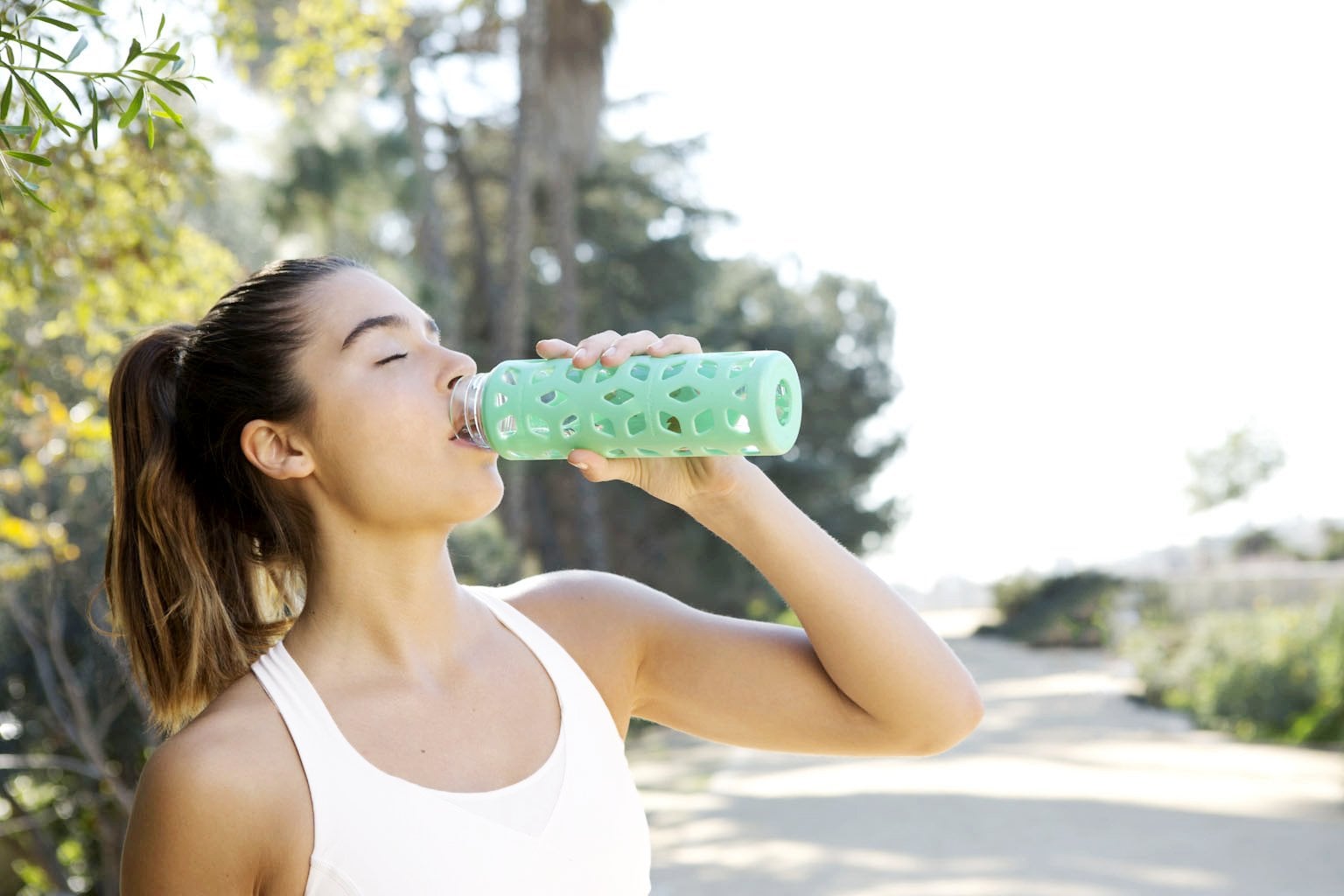 I'm the absolute worst at drinking water. There are sometimes full days where I'll fuel myself solely on coffee, and then I'll realize come 7 p.m., when my night's winding down, that I haven't touched H2O all day. Not being the best water drinker is bad, sure, but even knowing this about myself, I haven't made any major efforts to tweak that. Until recently, that is.

I recently traveled to Kona to watch the IronMan World Championships, and while I was there I linked up with some scientists from the Gatorade Sports Science Institute. After undergoing a sweat test, which involved pre-workout weighing and a few strategically placed patches that would help measure how much fluid I lost over an hour run, I got my results. They were shocking. I sweat — a lot. Like, 1.5 liters per hour, which is at the high end of the spectrum (the average is 1 liter per hour). Translation? Girl needs to start hydrating more, otherwise I could be at risk for some negative repercussions including a bad mood and increased muscle soreness.

So I made a plan. I would drink six 17-ounce bottles of water each day (the Food and Nutrition Board suggests about 91 ounces of water from both liquid and food sources daily). Here's are the three biggest takeaways from my week of better hydrating.

Related:
I Drank a Gallon of Water a Day For 3 Weeks (and Why I'll Never Do It Again)

My Skin Cleared Up

I've heard people talk about how water helps them clear their skin up all the time. When I went in for my first facial a few months ago (I know, I'm a late skincare bloomer, too), the aesthetician at Heyday told me that the small bumps I have on my forehead are actually a direct result of my skin being dehydrated.

While there's no conclusive evidence that drinking water can clear up skin, one University of Missouri-Columbia study showed that drinking about two cups of water (500 milliliters) increased blood flow to the skin, although we don't know if that makes it healthier. For me, drinking more water caused the bumps on my forehead to decrease by the end of the week, and even the rosacea in my cheeks faded a little bit, which I was grateful for.

I Was Less Bloated

I wouldn't say that I walk around feeling bloated all of the time, but I wouldn't say I always feel stellar, either. While it did get to be a bit bothersome always lugging a water bottle place to place (it helps that I was trading off between a too-cute S'Well and a grenade looking bkr that I received endless compliments on), I did feel a whole lot lighter throughout the week. By drinking more water with my meals, as well, I felt like my food was digesting better, and I had less of that why-am-I-still-so-full feeling the next day.

This was really the most interesting result. For years now I've been a two-cup sorta woman. One when I get to the office, and one by mid-morning. By day four of my week of drinking more liquids, I found that I'd sit down at my desk and opt for a glass of water before hitting that java. Dare I say it, I was even craving water. Some mornings, I'd get to 11:50 a.m. before I even realized that I hadn't had a cup of coffee.

Do I think I'll stick to drinking water at this rate? To be honest, I do. The bathroom trips aren't nearly as frequent as they were when I started my experiment. Just like when I started meditating, hydration feels like an important piece to the puzzle piece for someone who's heavily into fitness and all things health. The only question left: what fancy water bottle am I going to put on my holiday list?