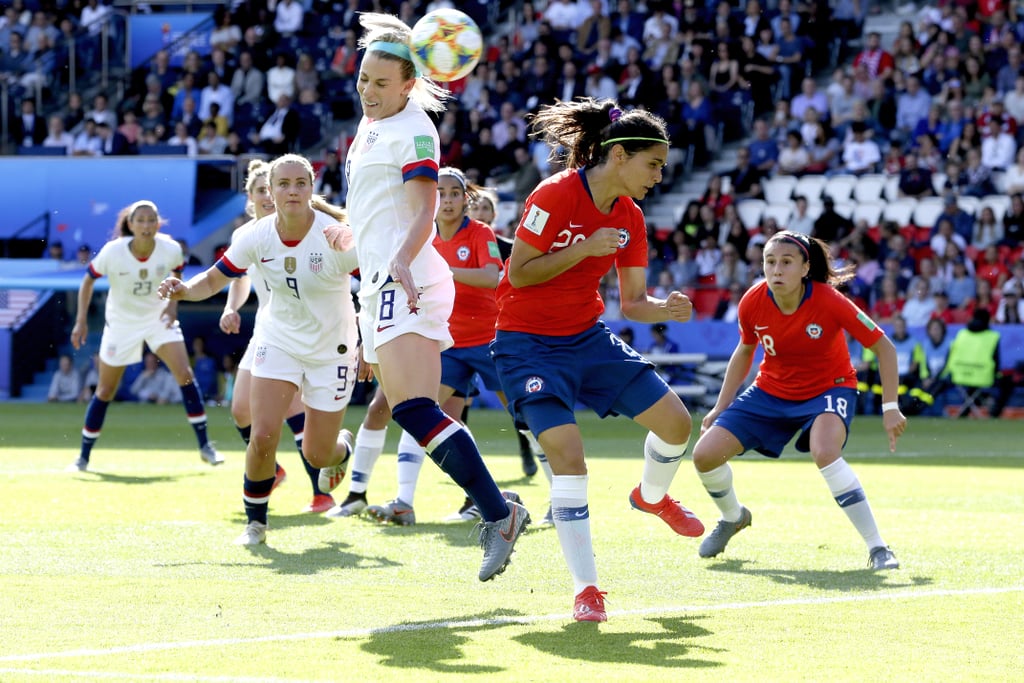 You've probably seen headers a lot during the FIFA Women's World Cup — that is, hitting the soccer ball with your head to pass or shoot. USWNT midfielder Julie Ertz and forward Carli Lloyd both scored headers in the 3-0 victory against Chile. You might have also witnessed forward Alex Morgan net one during team USA's history-making 13-0 match against Thailand (she scored five goals that game, NBD). These headers really do look like they hurt from a viewer's perspective — especially when you hear (and practically feel) the impact — so POPSUGAR sought out expertise from Dennis Cardone, DO, sports medicine specialist and codirector of the NYU Langone Concussion Center, to learn about the risks.

Can Heading a Soccer Ball Cause a Concussion?

There's definitely a risk of getting a concussion from a header, Dr. Cardone said, but you're more likely to get it from colliding with another player in the process. "Sure, when you look at the data, most concussions do occur with heading, but it's not head-ball contact, it's head-to-head contact," he explained. Though a 2018 study from the Albert Einstein College of Medicine suggested that frequent headers do, in fact, affect cognitive function more than these collisions.

In 2015, the US Soccer Federation banned kids 10 and under from heading the ball in practice and games. It advised coaches to limit headers for kids ages 11 and 12, according to US Youth Soccer rules published the following year (and this is consistent with the most recent policies). "A big part of this is more enforcing the rules of soccer and players understanding the rules of soccer," Dr. Cardone said, adding that player-to-player contact should also be examined more.

What's the Safest Way to Head a Soccer Ball?

To minimize potential injury, Dr. Cardone said players have to stabilize their neck and torso to reduce rotational forces (head rotation is a main cause of concussion). Dr. Cardone noted that it's also more likely that patients seek medical attention not because they've purposely headed a soccer ball, but because they've unexpectedly been hit with one. This is where neck stability comes into play — they weren't ready for the impact.

Practice makes perfect, Dr. Cardone told us, and "by stabilizing the torso, that's what protects the head and neck." The crown of your head is the most sensitive area — which is why, he said, football players, for example, are told not to tackle with their heads down. Impact of that vulnerable area leads to "more catastrophic neck injuries as well as potential concussions," he said.

Heading in soccer is normally done from the front and side regions of the head (this coach suggests using your hairline). Hitting the ball from these regions is "more protective," Dr. Cardone said. Ahead, check out the headers we mentioned earlier (I highly recommend watching Ertz's goal on repeat!). Headers may look like they hurt — and there's always a risk of injury — but these players have practiced all their lives, so we would hope they'd know how to do it in the safest way possible.

Related:
According to an Expert, Doing This Workout a Few Days After a Concussion Can Actually Help Recovery
Previous Next Start Slideshow
WorkoutsWomen's World Cup 2019SoccerInjury PreventionAthletes

Olympics
After Securing Her Olympics Spot, Sha'Carri Richardson Ran Straight to Her Grandma's Arms
by Karenna Meredith 14 hours ago

Instagram
Ready to Sweat? These 3 New Instagram Live Workouts Will Get Your Heart Pumping
by Maggie Ryan 12 hours ago