"She's going on tour . . . we're buying plane tickets, renting a house for the weekend, making shirts, and going to see her at the Rose Bowl."

Out of context, one could easily assume someone was talking about Taylor Swift or Beyoncé. Very few women have had the star power to draw in thousands upon thousands of fans for world tour events — but the star in question is no traditional celebrity and doesn't even consider herself to be a celebrity at all.

I showed up in Pasadena, CA, for the Kayla Itsines Sweat Tour Sunset Bootcamp event around 5 p.m., just as doors were opening to an intimidatingly long queue of fitness fans. Women from all over the country were donning bright pink activewear in homage to their queen. And it wasn't Queen Bey or #SquadGoals Taylor . . . their idol is a fitness trainer from Adelaide, Australia.

A sea of women and yoga mats blanketed the grassy sprawl of the football stadium, as loud music pulsed through the speakers and everyone anxiously awaited the main event. A countdown on the jumbotron ticked down from 10 to one, and as the tanned and toned woman of the hour ran out from a tunnel onto the stage, a roaring cheer erupted from the crowd and shrieks of excitement drowned out the loudspeakers. Kayla Itsines had arrived.

At the front of the crowd were the girls from Texas, in their black, custom "TX BBG" tanks over hot-pink sports bras. They were a group of six new friends; each of them hadn't known the others prior, and they had all met online via the BBG (Bikini Body Guide) program. They flew into LA together — a journey that was over 1,000 miles — and waited in line six hours prior to the start time of the event to position themselves as close to the stage as possible. Before you think, "Who on earth would put in that much effort for an hour workout?" let me just say — this is not just about a workout.

On stage, the ever humble Kayla was in disbelief. Nervous, grateful, and clearly emotional, she seemed to be in complete awe of the scene. When we spoke to her the next day she said, "I can't believe so many people actually showed up." She was still so stunned.

In 2012, Kayla started her Instagram as a way to share fitness and nutrition tips; the trainer had great success with her clients in person and wanted to reach more people. Before she knew it, her social media profile and her program were catching on like wildfire.

In the past year, Kayla's community has doubled. Her boyfriend and business partner, Tobi, gave a brief speech at the beginning of the boot camp, saying, "Twenty-five million women in the past year have committed to this program." In addition, her Instagram following has skyrocketed to well over five million. This is no ordinary workout plan.

I chatted with a few dozen BBG girls around the event. Aside from, "How long have you been doing BBG?" "How did you find out about it?" and "Where are you from?" — I asked each woman what her favorite part of the program was. Although a few mentioned enjoying the brevity of the workouts (they're only 28 minutes, three days a week) and the results they've enjoyed, no one emphasized "getting fit quickly." Their favorite part of BBG was the community, the strong support system, and friends they'd found in the process.

"It's all about the people," said 25-year-old Cait G from Dallas. Her friend, 24-year-old Stephanie DiLoreto, echoed that sentiment. Her favorite part of the program was "meeting girls from all over the world who have the same goals."

This sense of community and empowerment that Kayla Itsines has fostered has created an unbeatable emotional bond between the trainer and her fans — fans who Kayla would refer to as "friends." Kayla told us, "I don't think I'm better than anyone else; I'm not like the celebrity and they're the clients, I'm part of the team. It's just all of us in it together."

Her role as the best friend and her "let's hang out together" antics are reminiscent of Taylor Swift's surprise arrivals at bridal showers and birthday parties — and each fan base shows a similar unconditional love. Kayla has shown up at BBG meet-ups before, once "crashing" a 2015 meet-up in New York City, greeted by surprised, shrieking, crying fans. Yet still, Kayla cannot fathom calling herself a celebrity — she just feels like the mutual friend in these groups of women.

"I'm like the person who introduces someone to someone else . . . like, 'Here's a new person, here be friends.' I'm the mutual friend." She loves being a person who can introduce someone not only to fitness and a healthy, happy life, but to new friends as well. "A lot of the girls yesterday . . . they came by themselves and left as friends."

After traveling from Adelaide to London, then New York City, then Los Angeles — all in just a few days time — and working out at boot camps, Kayla closed her tour by telling everyone, "I'm going to meet and greet all of you." And she did. She stood for hours as about 1,000 adoring women wept, laughed, jumped, and hugged her. She posed for pictures, thanked her team, and did all of it with gratitude and a smile.

The next day we asked her about her experience, and she was glowing, recounting how she finally got to meet one woman who she'd been "friends with on Instagram" for ages. She flashed her phone screen and showed us Julie Ana's Instagram and talked about meeting her like anyone would talk about meeting a friend — not a fan.

While most celebrity trainers gain such a title by training a celebrity, Kayla Itsines has become a celebrity in her own right by training everyone — she prides herself on being a woman's first access point into fitness, and from the start, her goals have been focused on helping others. It's clearer than ever that her efforts are more than appreciated.

Related:
These Total-Body Transformations From the BBG Workouts Will Have Your Jaw on the Floor
Celebrity TrainersKayla ItsinesFitness Motivation 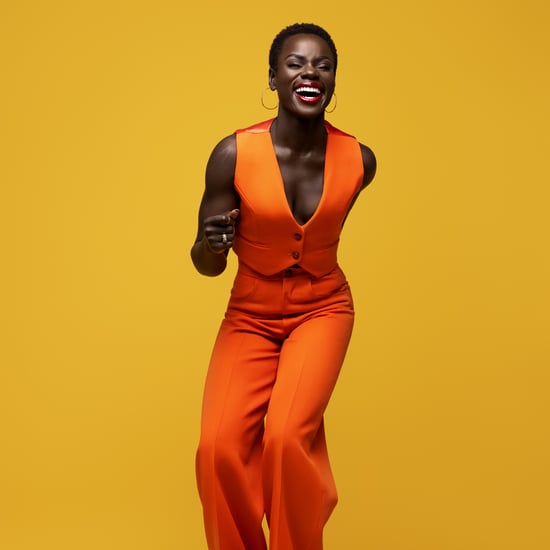