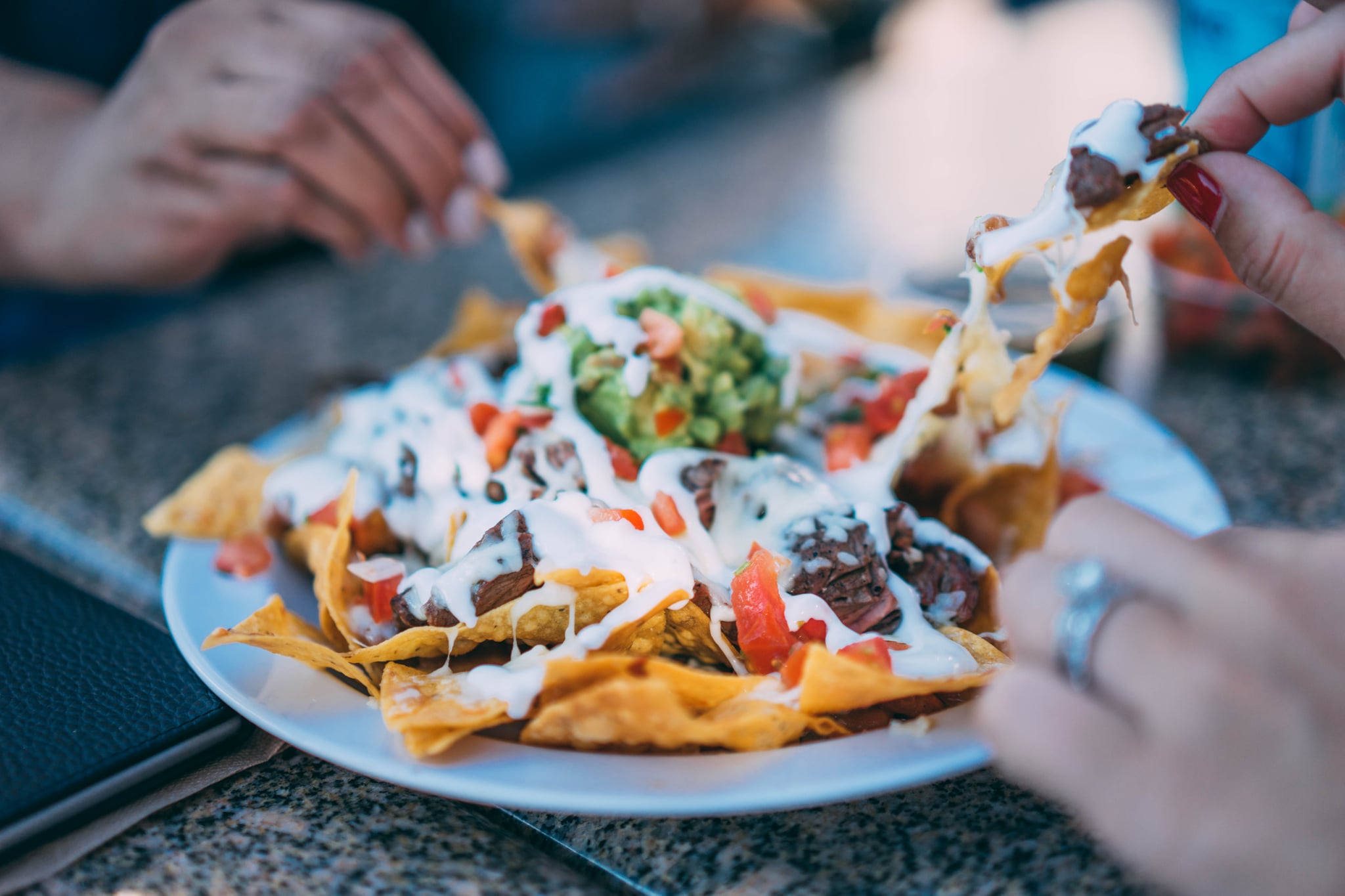 Having a big serving of carbs is not enough to keep you full in the long run. After finishing up a big plate of nachos with cheese, my comfort food, and researching for this article, I now know I'm probably going to be hungry again very soon. Why is that?

Carbohydrates, which are the sugars and starches found in breads, cereals, fruits, and vegetables, are supposed to be one of our bodies' main sources of fuel. So, you'd think that when we eat them, we'd always feel full and satisfied, at least until we do something active that uses up that energy — but that's just not always how it works out.

When we eat certain kinds of carbs, that full and satisfied feeling doesn't last as long. So what's the best way to incorporate this essential macronutrient into a healthy diet? To help clear up all this carb confusion, POPSUGAR spoke to E. Susannah Southern, RDN, LDN, the clinical nutrition manager at the University of North Carolina Hospitals Outpatient Nutrition Clinics in Chapel Hill.

Related:
Simple Low-Carb Food Swaps You Can Make Every Day

There Are 2 Different Types of Carbohydrates

You're probably familiar with the terms "simple carbs" and "complex carbs." Simple carbs, also referred to as simple sugars, are found in things like fruit, vegetables, and milk. Complex carbs are commonly thought of as starches, and are found in breads, rice, and potatoes, among other things.

During digestion, both simple carbs and complex carbs are eventually broken down into simple sugars, including glucose, galactose, and fructose, according to the US National Institutes of Health. These sugars are then stored in the liver until our bodies need them for energy.

As the name suggests, complex carbs have a slightly more complicated process to go through before breaking down all the way into sugar. They're also generally thought to be more filling, and a better nutritional choice than simple carbs, according to the Physicians Committee For Responsible Medicine. But not all complex carbs are created equal.

Related:
If You've Ever Gone Low-Carb, This Will Make You Laugh (or Cry Your Eyes Out)

Southern confirmed that some carbohydrates are more likely to leave us wanting more than others. "You may find yourself hungry sooner than expected after eating carbs that are lower in fiber, or carbs that are more processed," she said.

Fruits and vegetables can fall into this category, either because they're low in fiber or low in calories, and digested quickly. This would include things like apples that have had their skins peeled before being eaten and bananas.

Some carbs that have been processed are called refined carbs, and they have had the bran and kernel stripped out, leaving just the starch, the United Kingdom's global diabetes community site further explains. This removes much of the fiber in this type of carb, making it more quickly broken down by the body. Classic examples of refined complex carbs include white breads, cakes, many pastas, and, yes, even chips, including the ones used to make nachos.

Simple carbs can be refined, too. A prime example of this would be high fructose corn syrup, which has been treated with enzymes to turn part of the syrup's glucose into fructose before you even consume it.

Refined carbs digest quickly, lead to spikes in glucose levels, and consequently can leave you tired, and hungry. "That's why a bowl of oatmeal [which is rich in fiber] will probably hold you over to your next meal longer that a bowl of Rice Krispies [which is a refined carb], even if the calories are the same," Southern said.

Why We Need Carbs in Our Diets

Carbs are the primary fuel for our brains and muscles. "Carbohydrates are our main source of energy," Southern said. "We need carbs to perform at our best, with a clear head."

If you're getting your carbs from whole grains, fruits, and starchy vegetables, like corn, peas, potatoes, beans, and Winter squash, you're also more likely to be including vitamins, minerals, and other micronutrients we need. "Grains sometimes get a bad rap in the internet diet world, but observational research shows that eating whole grains regularly is associated with lower risk of diabetes," Southern said.

Related:
Moment of Truth: Are Carbs Actually Bad For You? We Got the Answer

What Is the Best Way to Get Your Carbs

Carbohydrates, which the Physicians Community said should be making up about three-fourths of our daily calories, are best consumed as a part of an overall healthy dietary pattern. Southern said that's a bit on the high end, and a range of 45-60 percent is more reasonable.

"Examples of healthy dietary patterns are the Mediterranean Diet, the DASH diet, and the MyPlate approach to eating," Southern said. "All of these patterns advise eating carbohydrates with proteins and fats, which is a balanced approach to meeting your nutrition needs. Our bodies need all three of these macronutrients."

Southern adds that you should have fun with your carbohydrate choices, and mix things up to keep your diet varied and interesting. "Step out of your comfort zone of wheat, oats, and rice or apples, oranges, and bananas. Those carbohydrates are still a nutritious pick, but you might be missing out on your new favorite grain or fruit," she said. "Look for recipes and try out that new (probably ancient) grain that caught your eye at the grocery store. Farro, quinoa, and millet are a few examples."

She also recommends grabbing a different type of fruit each week to have with lunch, instead of reaching for that traditional bag of chips.

Related:
Will Eating Carbs at Night Make Me Gain Weight? These Photos Have the Answer

Should Everyone Eat Carbohydrates

Southern said that it's important to remember that some people may have trouble digesting certain carbohydrates. "As my mom always said, 'Listen to your body.' If you know that you feel bloated every time you have milk, then do not try to make yourself drink it just because it's on a list of healthy foods," she said. Instead, she said to find alternatives that don't make you feel uncomfortable, like fortified plant milks, in the case of an aversion to dairy.

"Other carbohydrates that some people can't tolerate include wheat and beans," she said. "Sometimes these foods do not need to be totally avoided, but can just be consumed in smaller portions to avoid discomfort."

She also reminds you carbohydrates can be easy to overeat, especially the processed ones. "Those that can be eaten straight out of the bag or box are prime culprits for mindless eating," she said.

Related:
10 Best Carbs For Weight Loss, According to a Dietitian

How to Avoid That Hungry Feeling After Eating Carbs

"The current nutritional wisdom is to limit your intake of carbohydrates that are mostly added sugar," Southern said. "Their nutritional value is low and they go down pretty easy. Enjoying sweets in small portions and avoiding sugar-sweetened beverages may be your best bet for limiting these empty calories."

It's also a good idea to include a large portion of non-starchy vegetables, like carrots, green beans, asparagus, or zucchini, and a source of protein with meals that include carbs.

"Think about what you already have on your plate to decide what you want on the side," Southern said. "For example, a salad is a great compliment to a spaghetti dinner, while bread is carbohydrate overkill."

So what does this mean if you already had your heart set on a big plate of nachos? Add some black beans to incorporate fiber, and maybe some grilled seitan or chicken for protein, and you'll be less likely to raid the fridge for another meal earlier than you had planned.

You can also make a good thing, like an unrefined complex carb, better, Southern said. "Add some protein and fat from nuts and/or Greek yogurt to that bowl of oatmeal and you will be satisfied even longer," she said.

In general, she adds that foods like beans and nuts of all kinds, fish (even canned tuna and salmon), berries, melons, plant oils (except coconut and palm oils), leafy greens, and eggs are great, filling options that we should be eating with things like whole grains and Greek yogurt, because of their many health benefits. Foods that Southern recommends having less of include processed meat, red meat, white flour, and sugar-sweetened beverages. 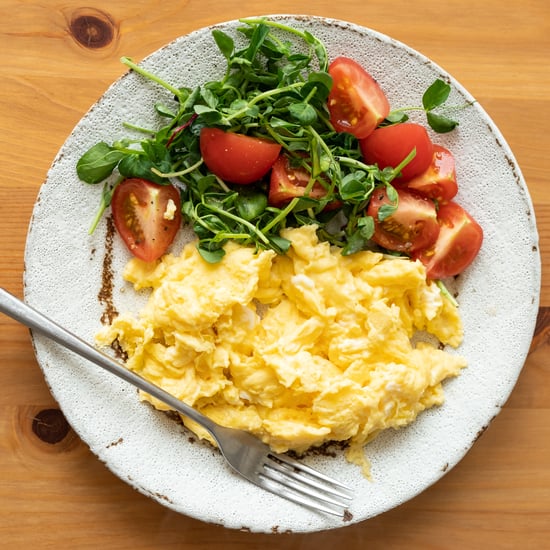 Weight Loss
Choosing Between Keto and Low-Carb? There Are Pros and Cons For Each
by Maggie Ryan 12/11/21 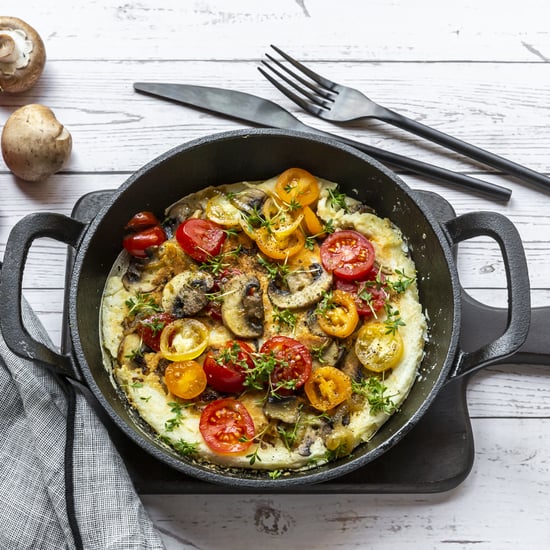