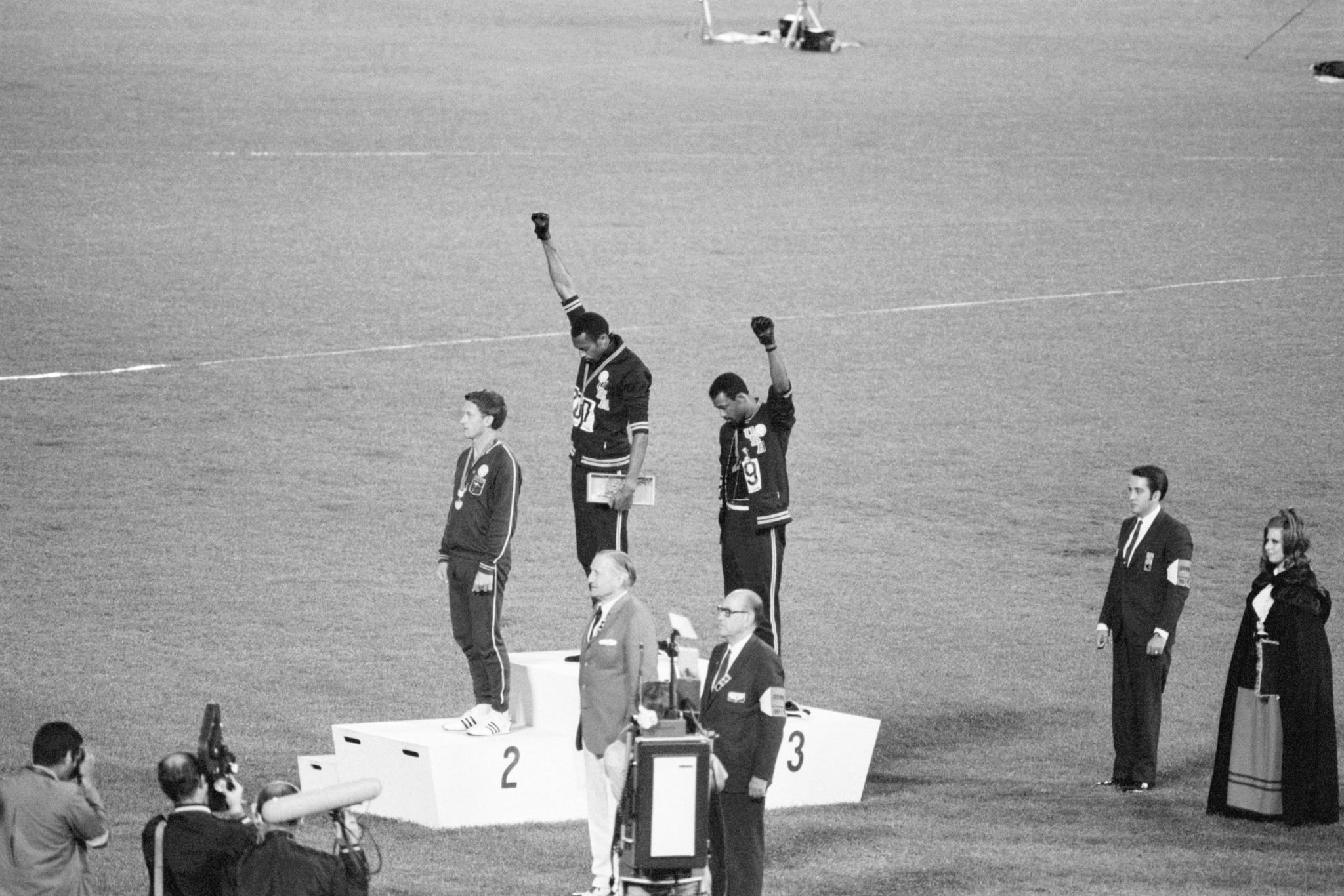 After the International Olympic Committee (IOC) originally announced in April that athlete protests will remain banned at the Olympics — specifically on the "field of play" and at official ceremonies — the committee decided to loosen this ban as of July 2. The IOC had said it wanted to protect the "neutrality" of the Games, and it still does, but now, athletes will actually be allowed to demonstrate on the field of play prior to the start of competition or during athlete introductions. Demonstrations amid official ceremonies (the opening and closing ceremonies as well as on the medal podium), during field of play, and in the Olympic Village remain off limits.

The policy in question is Rule 50 in the IOC Olympic Charter that states, "No kind of demonstration or political, religious or racial propaganda is permitted in any Olympic sites, venues or other areas." Regardless, demonstrations prior to competition should not be "targeted, directly or indirectly, against people, countries, organisations and/or their dignity," and they cannot be disruptive to the point where they interfere with other athletes' concentration or physically cause harm to "persons or property." Any act that suggests discrimination, hatred, hostility, or violence is not condoned, and the demonstration cannot go against rules of the relevant National Olympic Committee (NOC). If an athlete doesn't respect the guidelines laid out by the IOC, they — and their NOC — may face discipline after evaluation, which you can read about here.

The IOC, together with the IOC Athletes' Commission, said on April 21 that 70 percent of the 3,500-plus athlete competitors surveyed viewed demonstrations at the opening and closing ceremonies and amid competition as "not appropriate." And 67 percent of athletes responded with disapproval of demonstrations on the podium. IOC Athletes' Commission Chair Kirsty Coventry stated on July 2 that the new guidelines resulted from "our extensive consultation with the global athletes' community."

According to the Associated Press, slogans such as "Black Lives Matter" will not be allowed, though The New York Times speculates that under the new IOC guidelines, any shirt with a slogan or gestures such as kneeling are theoretically permitted. When POPSUGAR reached out to the IOC to verify AP's report from earlier this year and ask if athletes would be penalized for wearing Black Lives Matter apparel, the committee twice did not address Black Lives Matter specifically and instead referred back to Rule 50 broadly prohibiting "political, religious or racial propaganda." It did, however, confirm that there are opportunities for athletes to express their views at the Games during press conferences, interviews with media, and team meetings.

In January 2020, the IOC Athletes' Commission had stated examples of prohibited acts including "gestures of a political nature, like a hand gesture or kneeling." The IOC noted to POPSUGAR that the new guidelines published on July 2 "provide an update to the version from January 2020," suggesting that athletes now have more (a little more, at best) leeway when it comes to demonstrating on the field of play.

While the IOC would not answer POPSUGAR's inquiry explicitly about kneeling, teams from the US, Sweden, Great Britain, Chile, and New Zealand all took a knee before the opening matches of women's Olympic soccer on July 21. According to CNN, IOC President Thomas Bach confirmed that kneeling did not in fact violate the rules. The Guardian reports, though, that the IOC and Olympic organizers have banned their social media teams from posting pictures of athletes taking a knee.

International Paralympic Committee (IPC) Handbook Section 2.2 features similar language to Rule 50, and the IPC approved measures proposed by the IPC Athletes' Council after nine months of deliberations with Paralympians and other para-athletes. Ultimately, Paralympic athletes will be able to demonstrate in the same approved areas as athletes competing in the Olympics: during interviews and press conferences, in team meetings, etc., "provided that their demonstrations, protests, and/or political statements do not involve any Impermissible Elements," a July 22 news release stated. However, all forms of protest will be "protected" from the field of play entirely and the official ceremonies.

Athletes Allowed to Demonstrate at US Olympic and Paralympic Trials

Athletes participating in the US Olympic and Paralympic Trials were allowed to demonstrate peacefully. On March 30 of this year, the US Olympic and Paralympic Committee (USOPC) announced participant rules for anyone wanting to demonstrate during the Trials. This came after the USOPC initially said in December that it would no longer penalize athletes who choose to take part in peaceful protests, supporting the efforts of the Team USA Council on Racial and Social Justice that aims to amend these longstanding policies put in place by the IOC and IPC governing bodies.

The USOPC announced that it would allow people to kneel during the national anthem and hold up fists; wear a hat or face mask that says "Black Lives Matter," "Trans Lives Matter," or words like "equality" and "justice"; speak about equal rights for marginalized and underrepresented communities; and advocate against police discrimination. It would not, however, condone demonstrations advocating "specifically against other people, their dignity, or their rights." This included hate speech, racist propaganda, or discriminatory language. A demonstration that violated laws, caused physical harm to others, or "physically impedes or discourages Trials or medal ceremony participation by another Participant" was also not condoned.

One American athlete who was reprimanded for protesting in the past? Gwen Berry. At the 2019 Pan American Games, she raised a fist and bowed her head on the podium when accepting a gold medal for the hammer throw. She, along with fencer Race Imboden, who won gold in his sport at the Pan Am Games that year as well and took a knee, demonstrated separately but for the same cause: racial and social justice. The USOPC put them both on a 12-month probation. It's worth noting that Berry demonstrated during the US Track and Field Olympic Trials last month without penalization from the USOPC, aligning with what that committee announced at the end of March.

Related:
UCLA Gymnasts Are Here to Make a Statement With Their New Black Lives Matter Leotards

Five decades prior was the iconic protest in 1968 from American sprinters Tommie Smith and John Carlos. Atop the Olympic podium for the men's 200-meter medal ceremony in Mexico City, each raised a gloved fist while the national anthem played. Their demonstration is referred to as the Black Power salute, though Smith wrote in his autobiography that the action was more than that; he said it was a demonstration for human rights. What was then known simply as the US Olympic Committee wanted to issue a warning, but after pressure from the IOC, the men were expelled from the Games.

"The silencing of athletes during the Games is in stark contrast to the importance of recognizing participants in the Games as humans first and athletes second."

Fast forward to this century, and the Team USA Council on Racial and Social Justice stated so powerfully: "The silencing of athletes during the Games is in stark contrast to the importance of recognizing participants in the Games as humans first and athletes second. Prohibiting athletes to freely express their views during the Games, particularly those from historically underrepresented and minoritized groups, contributes to the dehumanization of athletes that is at odds with key Olympic and Paralympic values."

By trying to keep sports "neutral," this, the council argued, targets "historically marginalized and minoritized populations within the Olympic and Paralympic community, most notably Black athletes and athletes of color, who have competed and excelled in Olympic and Paralympic Games against the backdrop of various social injustices and turmoil."

Taking into account the demonstrations we've seen from professional athletes across sports in recent years, it'll be a case-by-case basis at this summer's Games if athletes demonstrate outside of the parameters set for them. And the IOC and IPC still have ultimate authority.