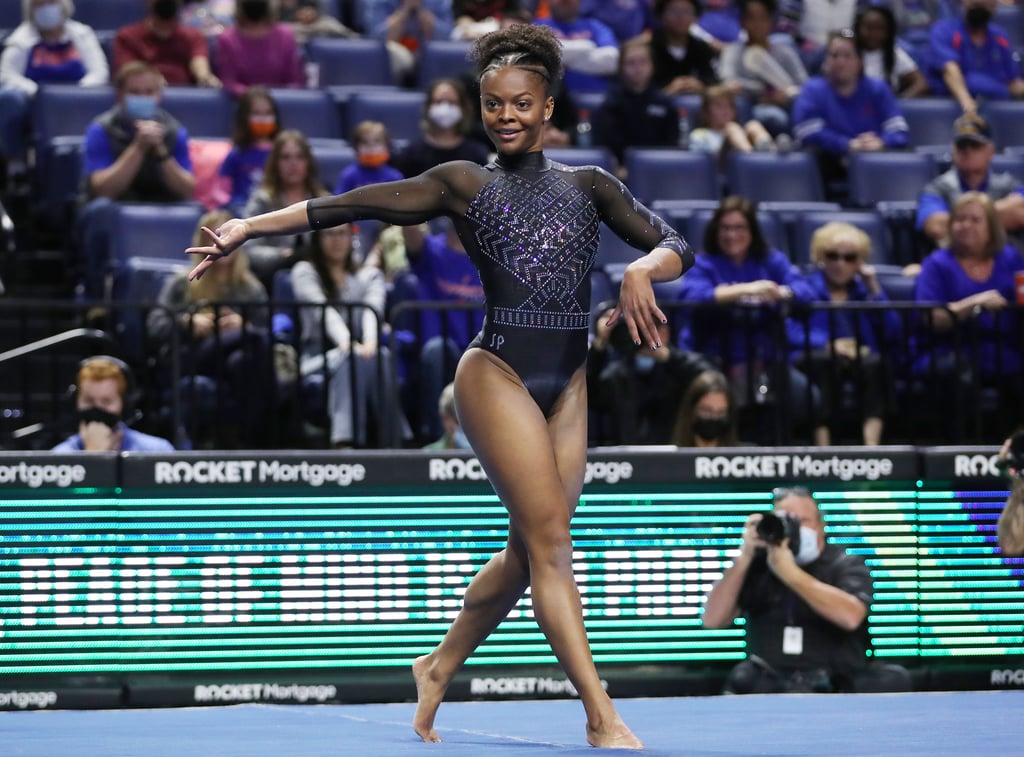 Trinity Thomas, a senior at the University of Florida, scored not one but two perfect 10s in the Gators' Jan. 16 meet against the University of Alabama. Ahead of this competition, dubbed Equality Night, Thomas had earned a 10.00 on three out of the four gymnastics events during her NCAA career: bars, beam, and floor. Then, her 10.00-scoring Yurchenko one-and-a-half vault over the weekend secured what's called a "Gym Slam" — getting a 10.00 on every single event. According to the Florida Gators, she is the 12th gymnast in the country to complete this "Gym Slam," and she's the first since Olympian and UCLA alumna Kyla Ross in 2019.

"It means the world to me because I've worked so hard on all four events, and I know what I'm capable of and I know what I do in the gym every day. And I knew I just had to put it all together for one more event to get that," Thomas told POPSUGAR of her "Gym Slam."

Thomas racked up her second 10.00 of the Jan. 16 competition on floor. As the team's anchor spot, she needed to get a near-perfect 9.95 for the Gators to clinch victory over Alabama, and she did not disappoint. Her performance followed teammate Nya Reed's 10.00, and Thomas did what she does best: she brought beautiful lines and flexibility (she even pointed her toes in her high-flying double layout!), executed tumbling passes that float through the air, and showcased eye-grabbing choreography.

Thomas now has a grand total of 10 perfect 10s spanning her collegiate gymnastics career — and 10 perfect 10s has a nice ring to it! What's even more amazing is that this isn't the first time Thomas received two 10.00s in the same competition; she did so last February with a pair of perfect scores on bars and floor.

Ahead, check out Thomas's "Gym Slam"-solidifying vault and her spectacular 10.00 floor routine. And the season's only just begun!

Related:
Mya Hooten's Floor Routine Sends a Powerful Message — and It Will Give You Chills
Previous Next Start Slideshow
SportsGymnasticsAthletes

by Shelton Boyd-Griffith 59 minutes ago