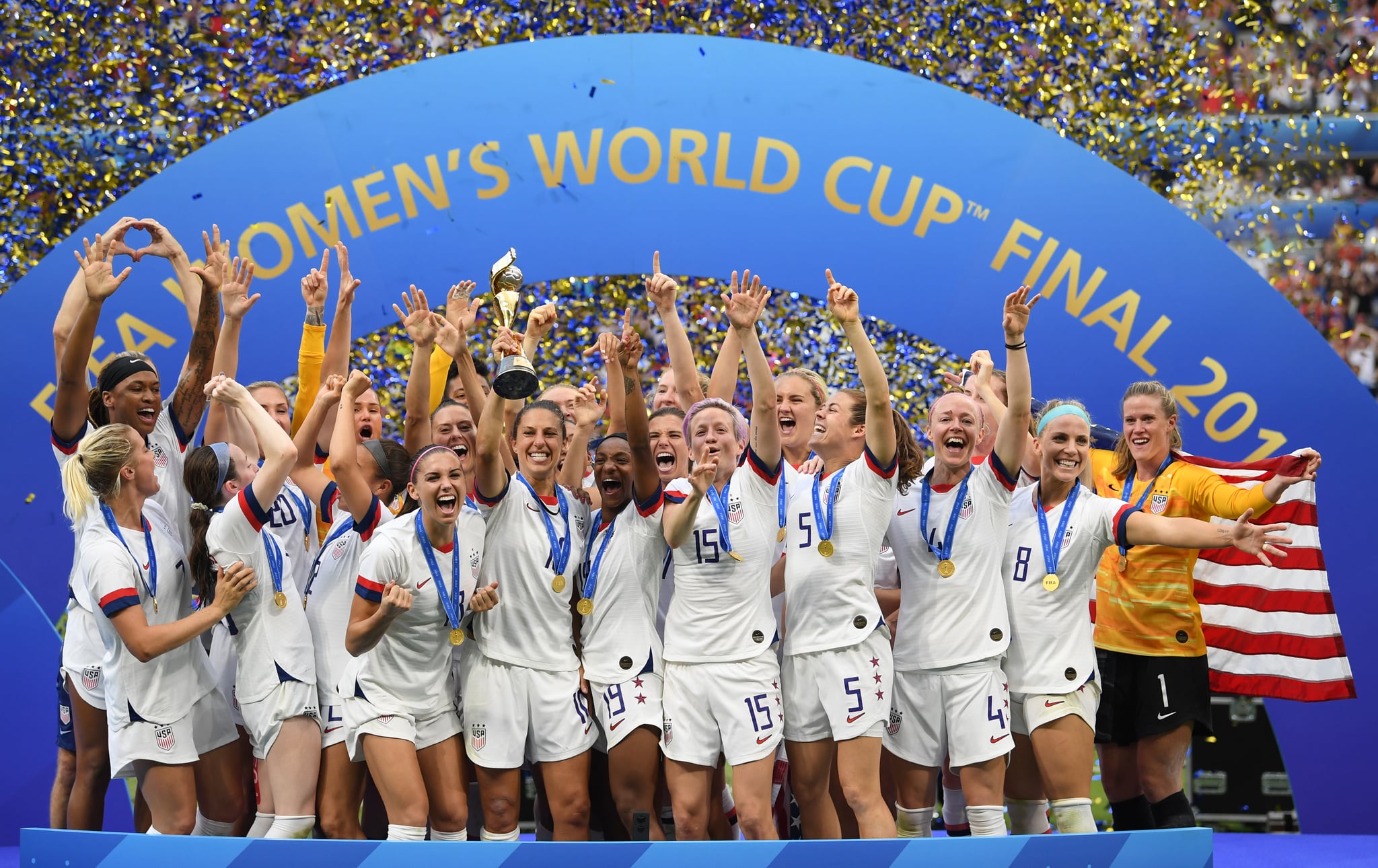 Update, Dec. 4: In May, a federal judge dismissed unequal pay claims from the US Women's National Soccer Team (USWNT) against the US Soccer Federation (USSF) — claims that argue these women have never been paid as much as the men on the national team. The dismissal was a major blow to the class action lawsuit the team had filed more than a year prior, but after a partial settlement over unequal working conditions announced on Dec. 1, the team is now able to move ahead with an appeal of the former.

The settlement came a month before the USWNT was scheduled to go to trial, and it addresses revised policies regarding charter flights, venue selection, professional support, and hotel accommodations, according to CBS Sports. And The New York Times reports that the new terms are expected to be incorporated into the refreshed collective bargaining agreement for the national team after it expires in 2021.

Cindy Parlow Cone, who took over as president of US Soccer in March when Carlos Cordeiro resigned, said the settlement signaled US Soccer's commitment "to find a new way forward." USWNT spokesperson Molly Levinson said, "We are pleased that the USWNT Players have fought for — and achieved — long overdue equal working conditions."

Levinson continued, "We now intend to file our appeal to the Court's decision, which does not account for the central fact in this case that women players have been paid at lesser rates than men who do the same job. We remain as committed as ever to our work to achieve the equal pay that we legally deserve. Our focus is on the future and ensuring we leave the game a better place for the next generation of women who will play for this team and this country." According to Sportico, the appeals process could take years, well through 2022.

Original post, May 4: On Friday, May 1, US District Judge Gary Klausner ruled against the US Women's National Team in their ongoing gender discrimination lawsuit against the US Soccer Federation. Bringing you up to speed, on March 8, 2019, all 28 members of the USWNT filed a class-action lawsuit, suing the US Soccer Federation for years-long gender discrimination, stating that they had been paid less money than their male counterparts because of their gender.

In March 2020, the USSF filed a response to the gender discrimination lawsuit stating, "The job of MNT [Men's National Team] player requires a higher level of skill based on speed and strength than does the job of WNT team player." (You can find the full document provided by BuzzFeed News here.) Unhappy with this remark, the USWNT protested by wearing their warmup shirts inside out during the final match of the SheBelieves Cup. Due to the negative backlash in response to these comments, Carlos Cordeiro, the then-US Soccer president, resigned.

Related:
When It Comes to Closing the Gender Pay Gap, Luna Bar and Star Athletes Are Leading by Example

Most recently, Judge Klausner ruled against the USWNT's equal pay claim, stating that the players "have not demonstrated a triable issue that WNT players are paid less than MNT players." Klausner's ruling was based off of the findings that the USWNT players were paid more than their male counterparts in total and on a per-game basis during the period in question, according to ESPN. Additionally, Klausner concluded that the difference in pay between the men's and women's teams was due to choices made by the women's team and their union, and not due to discrimination.

Although the equal pay claim has been thrown out, Judge Klausner ruled that the Title VII discrimination claim the USWNT filed — which pertains to unequal work conditions — can still go to trial.

"We are shocked and disappointed with today's decision but we will not give up our hard work for equal pay," Molly Levinson, spokeswoman for the USWNT tweeted. Levinson also said the USWNT plans on appealing the decision. This may be a temporary hurdle for the USWNT, but we know they will continue to champion equality for the USWNT and women athletes worldwide. In light of the ruling, Megan Rapinoe tweeted, "We will never stop fighting for equality."