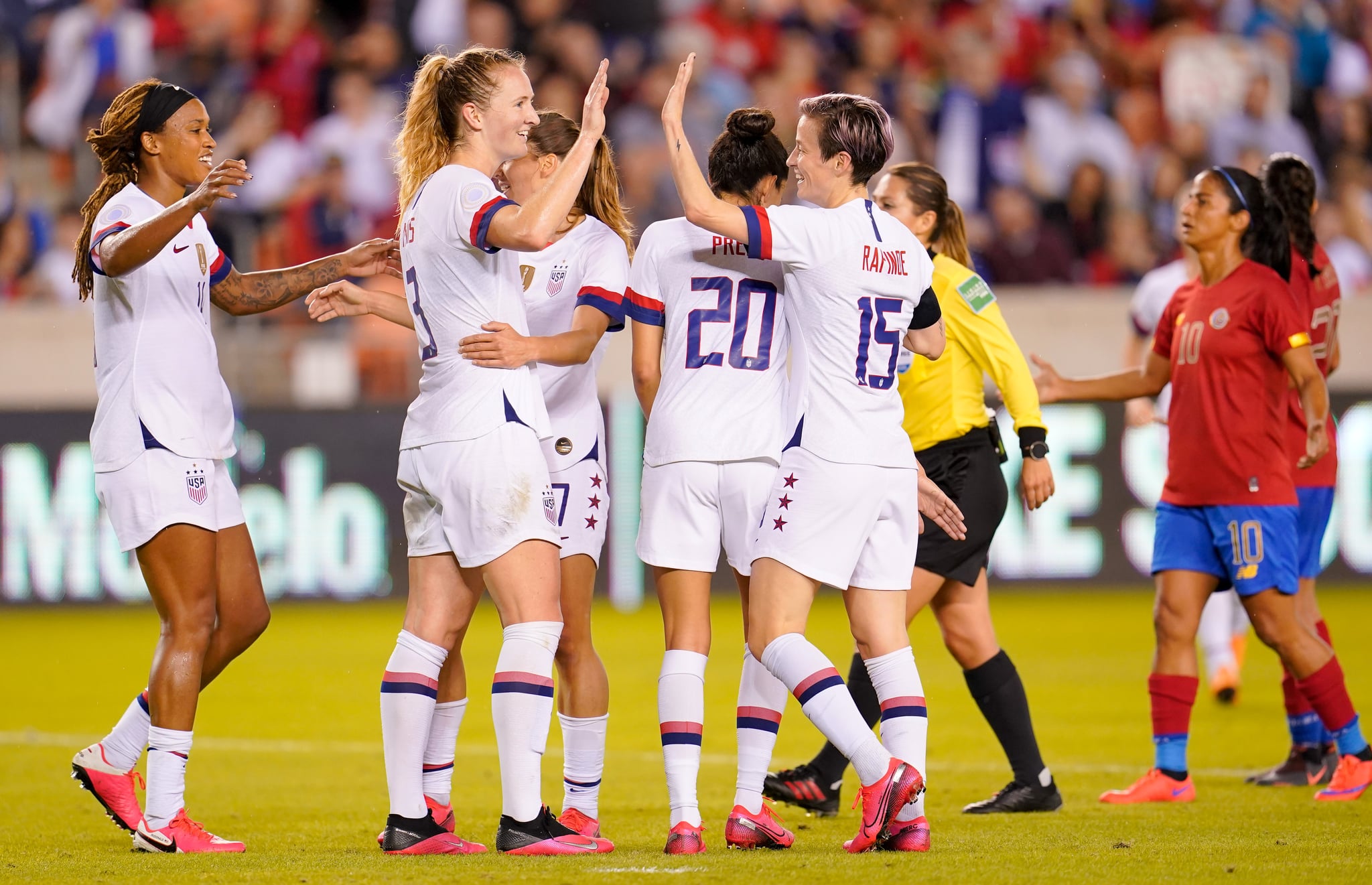 Update, March 13: Since this article was originally published on March 11, US Soccer Federation President Carlos Cordeiro announced his resignation. The current vice president, Cindy Parlow Cone, will act as the interim president until 2021.

On May 5, three months before the Tokyo 2020 Olympics, US women's soccer is slated to go to court with the team's governing body, US Soccer Federation (USSF), over a gender-discrimination lawsuit filed in March 2019 — and the federation's latest, and truly outrageous, claims in the case are causing even more controversy. (If you need a rundown of the USWNT lawsuit, this is a very helpful breakdown of everything at stake for both sides.)

In a court filing on March 9 — which you can read here, provided by BuzzFeed News — lawyers for the USSF claimed that women soccer players are less skilled and their work is less demanding than the men's. One section of the filing is titled "WNT and MNT Players Do Not Perform Equal Work Requiring Equal Skill, Effort, and Responsibility Under Similar Working Conditions."

The responsibility of the men's national team, USSF lawyers stated, is greater than that of the USWNT. Namely, the men compete in more international tournaments. The lawyers also pointed to hostility that the men face abroad and at home. "Opposing fan hostility encountered in these MNT road environments, especially in Mexico and Central America, is unmatched by anything the WNT must face while trying to qualify for an important tournament," the court ruling stated. "Even the hostility of fans at home crowds for the MNT in some friendlies can be unlike anything the WNT faces."

There's more. "The overall soccer-playing ability required to compete at the senior men's national team level is materially influenced by the level of certain physical attributes, such as speed and strength, required for the job," the USSF argued. A spokesperson for the USWNT responded with the following:

The compensation under the different collective bargaining agreements (CBA) is complex, but spokesperson Molly Levinson's point is clear: the very logic behind the USSF's argument is sexist. If we're talking about money, here's something to consider, if you have a moment. US women's soccer has been overall more lucrative in recent years than US men's soccer. As The Washington Post states, "From fiscal 2016 to 2018, the women's games generated about $900,000 more revenue than the men's games." Let's not forget that the team's home jersey became the most-sold soccer jersey, men's or women's, ever sold on Nike.com in one season.

Both teams have separate CBAs, and it's also important to note that bonuses earned during the World Cup are separate, which you can dive into here. In the lawsuit filed last year, one case claimed the following: "A 20-game winning top tier WNT player would earn only 38% of the compensation of a similarly situated MNT player." Translation: if the USWNT and USMNT both won 20 friendlies, or exhibition games, in a row, the women would make a little over a third of what the men make. This, The Washington Post notes, applied to the old CBA for the USWNT that expired in 2016. Now, they would reportedly make 89 percent of what the men make in the same scenario.

"Shall we fight it out to see who wins and then we get paid more?"

Sure, right before the team won its fourth World Cup, Luna Bar wrote the 23 players on the roster a check for $31,250 each, reportedly equaling the difference between the women's and men's World Cup roster bonuses. Then, Secret Deodorant followed suit. That helped temporarily. In the year since the initial filing, the USWNT was granted class-action status, meaning the judge overseeing the lawsuit agreed that the lack of compensation and resources these members were claiming applied not only to the 28 women named in the lawsuit but also to a bigger group: any woman who had played for the team since the period specified in the suit. (Note: you can access the full lawsuit here, originally shared by The New York Times.)

Needless to say, the women's success on paper is far superior. While the women have won four World Cup titles and four Olympic gold medals, the men, who have had more chances to earn these titles, have won zero World Cups and haven't even qualified for the Olympics since 2008.

Carli Lloyd, two-time World Cup and Olympic champion, was asked by USSF lawyers if she thought her team could compete against the men, according to documents obtained by BuzzFeed News. Her response? Let them hit the field. "Shall we fight it out to see who wins and then we get paid more?"

Read up on the players' act of protest after the fact and the Federation's apology here.

Related:
Every Record the Amazing US Women's Soccer Team Broke at the 2019 World Cup
SportsSoccerAthletes