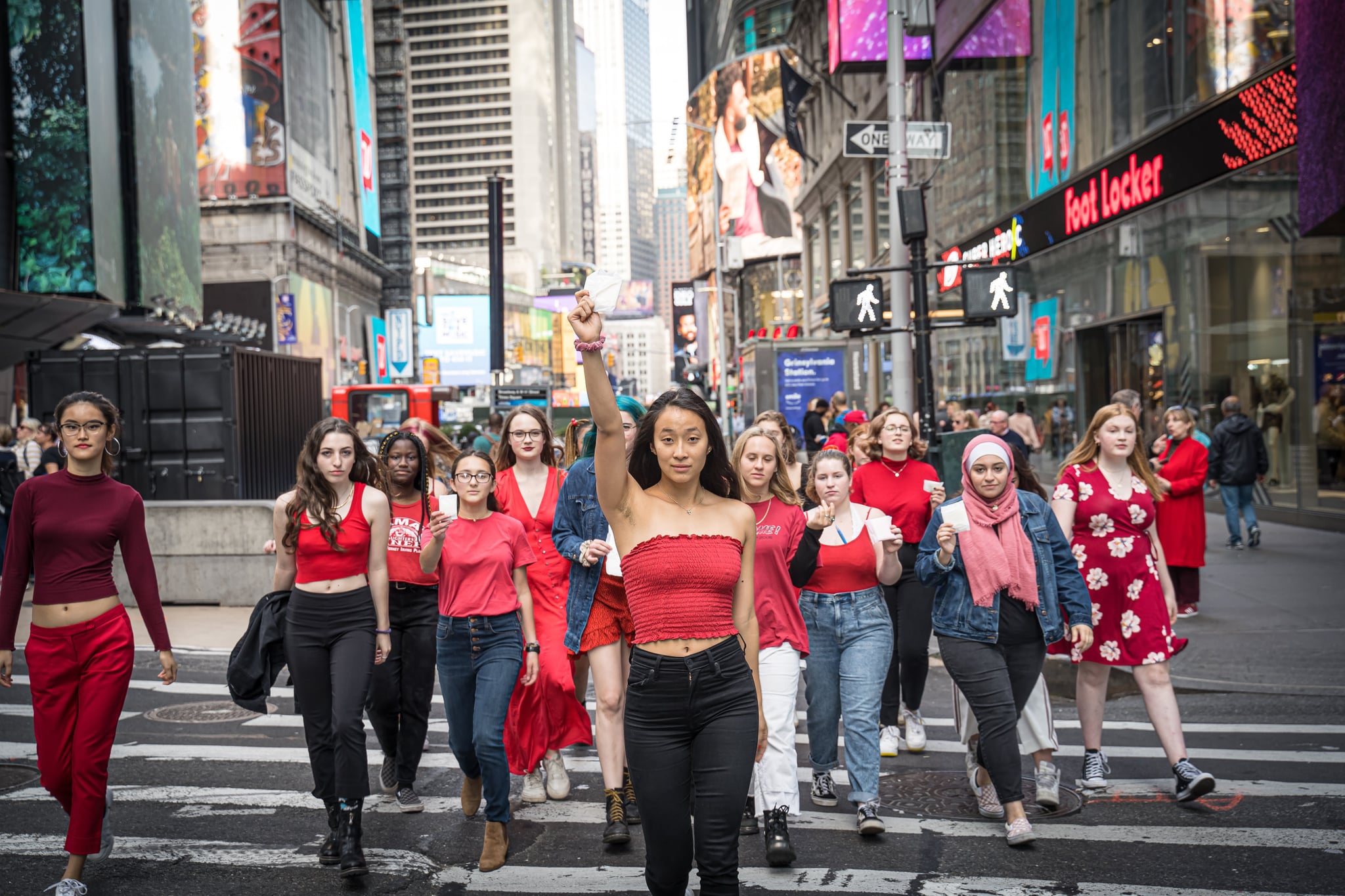 Until 2016, when Nadya Okamoto delivered one of her first TED talks at the University of Oregon, no one had even heard the phrase "menstrual movement." But the then-18-year-old would soon become one of the most prominent faces of a full-fledged battle to dissolve the taboo around menstruation and promote menstrual equality. Several years later, Okamoto's organization PERIOD has grown to more than 800 chapters — covering all 50 states and 40 countries — and collectively, she and her allies in activism have slowly dismantled the stigma surrounding menstruation.

"When I first started PERIOD when I was 16, a lot of my radio interviews were being pulled off the air because they were considered inappropriate," Okamoto told POPSUGAR. But now, with periods finally being discussed more openly, she and a wave of young activists have set their sights on another goal: ensuring that people around the globe have equal access to period products, which for far too long have been a "luxury" some simply can't afford.

What Is Period Poverty?

Around the world, period poverty — the term used to describe the lack of access to affordable menstrual products — is pervasive. In developing countries, the inability to take care of their periods each month often costs young people their education. About 70 percent of girls in India's second largest state skip school while they're on their periods. The United Nations estimates that 20 percent of girls simply drop out after they hit puberty. In Africa, the reality for people who menstruate is even more grim. A 2014 UNESCO report provided anecdotal evidence that young women in sub-Saharan Africa have had to engage in sex work in exchange for pads or tampons in order to remain in school.

In the US, four out of five teens have either missed class time themselves or know someone who has because they didn't have access to period products.

But even in the US, long considered one of the wealthiest countries in the world, four out of five teens have either missed class time themselves or know someone who has because they didn't have access to period products, according to a survey commissioned by PERIOD and Thinx.

How is that possible? Thirty states in the US still allow a sales tax to be applied to menstrual products (often referred to as the "tampon tax"), though many other health-related items that have been deemed essential are exempt. "Period products should not be considered nonessential goods while Rogaine, Viagra, and penile pumps are considered essential goods," Okamoto said. While the tax alone is problematic, there are also barriers to access in places that could in theory help serve the most vulnerable populations, including schools, community centers, shelters, and prisons.

How Activists Hope to Solve This Crisis

The goal is simple, though the path is not: grant equal access to period products under the law. Some countries are light years ahead when it comes to legislation. Earlier in 2020, Scotland's Parliament passed a bill introduced by member Monica Lennon that would make menstrual hygiene products free across the board, in all public restrooms, schools, and universities. It's currently in the second stage of the process of becoming law.

In England, what started as a "Free Periods" petition in 20-year-old activist Amika George's bedroom has completely changed the game for students. George partnered with another organization for menstrual equality in education, the Red Box Project, in January 2019, to challenge the government to provide free products to students. By January 2020, they were victorious, with a free supply of pads and tampons arriving in public schools and colleges throughout England.

The US has had some small victories, including repealing the tampon tax in a number of states between 2016 and 2020, largely due to the efforts of PERIOD and another advocacy organization, Period Equity. In 2018, New York also passed a law making hygiene products available for free in public schools for grades six through 12. Most recently, the federal stimulus bill passed in response to the novel coronavirus (COVID-19) pandemic reclassified period products as medical expenses, which allows employees with health savings or flexible spending accounts to purchase them using pretax spending. But while recognizing menstrual products as medically necessary under pretax health plans is an important step forward, it does little to solve period poverty in low-income households. 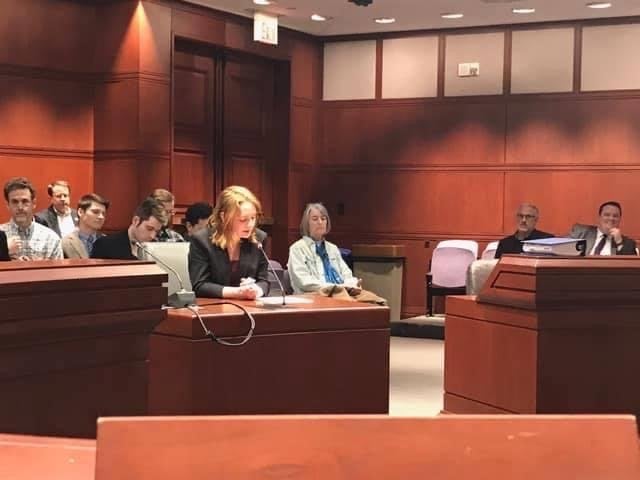 COVID-19 has presented another set of challenges for advocates working on the ground. Samantha Bell, the 25-year-old programming director for the Alliance For Period Supplies, explained that the service organization — an arm of the National Diaper Bank — is primarily focused on distribution of period supplies, especially right now. While handing out additional pads, tampons, and menstrual cups at food banks, COVID-19 testing centers, and school lunch pickups, they've gone through what would normally be a three-month supply every two weeks.

When they're not navigating an unprecedented crisis, Bell's organization also focuses on awareness and advocacy in government, especially locally. "Folks who know the local landscape — that is what drives a lot of our work," she told POPSUGAR. For example, it was two 16-year-old students in Astoria, Queens, Nicole Soret and Mya Abdelwahab, who launched a campaign that eventually convinced the New York City Department of Education to distribute menstrual products, in addition to food, at more than 200 schools during the pandemic.

It's these grassroots efforts that activists hope will help them achieve the common goal of making products freely available in schools, workplaces, state correctional facilities, shelters, and "wherever toilet paper is considered free," Okamoto said. (The Menstrual Equity For All Act, which was introduced in Congress in March 2019, covers most of those bases, but there hasn't been much movement on it since then.) Bell pointed out that additional objectives include getting period products covered by federal safety net programs like SNAP and WIC.

And, of course, there's the continued work of repealing the tampon tax, which while an issue, mostly affects people who can already afford, even if barely, to purchase menstrual products. Lifting the tax on tampons and other menstrual supplies is not going to solve period poverty, Okamoto explained, but it's a "Trojan horse," as she puts it, that helps start the conversation about other important issues.

"The more I see change happening in the UK and Scotland, the more hope I have," Okamoto told POPSUGAR. She noted that the US does have a higher level of poverty than Scotland does, so it may not be possible to make period products free everywhere — but the changes already happening in schools and workplaces are promising.

There's also a lot of energy driving this work. Okamoto's army of menstrual advocates — which has grown exponentially during the pandemic, especially in the form of signups for PERIOD's digital policy advocacy bootcamp — harnesses the power of social media, often to publicly pressure legislators on issues surrounding menstrual equality. In the last year alone, they helped take down the tampon tax in Ohio, Utah, Washington, and California by doing just that. Bell and the Alliance For Period Supplies have similarly tapped social media, by launching the organization's #endperiodpoverty campaign, tied to National Period Poverty Awareness Week. The goal: to get would-be activists to pledge donations, host virtual product drives, or simply start conversations about period poverty in their own communities.

The young women leading this charge believe they have what it takes to spur lasting change, even in the form of legislation, which is notoriously difficult to pass. "That's kind of a superpower that we have, with our network of young activists. We go into our legislators' offices and say, 'You work for us as constituents, and this is where we're demanding change,'" Okamoto said. When more lawmakers eventually recognize that menstruation isn't a choice — and period products shouldn't be a luxury — there will be nothing that can stop their momentum. Period. 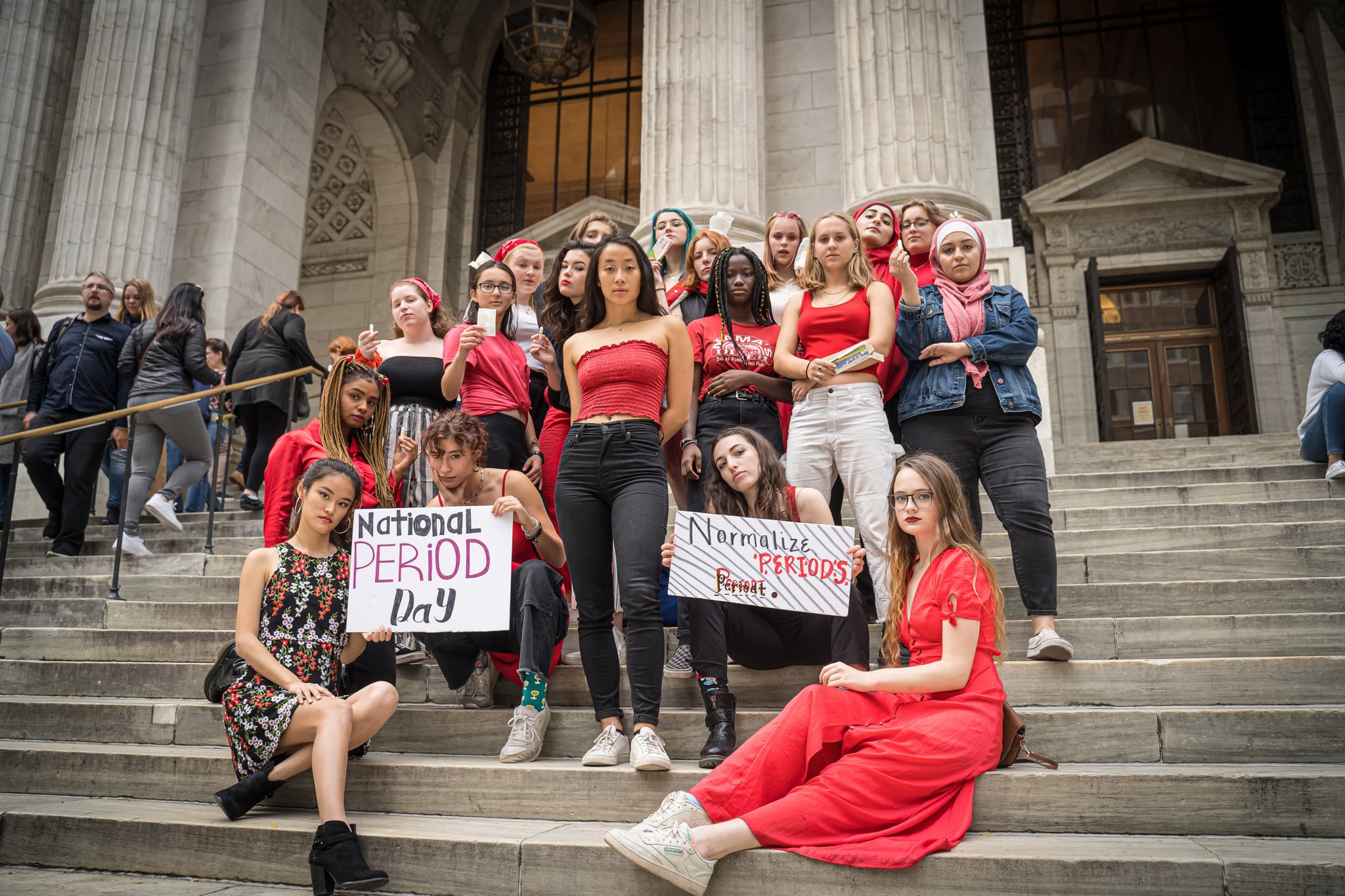