It's nearly impossible to find one bad trait about oatmeal. The popular breakfast food is filling, comforting, nutritious, and can be prepared so many ways. And while oatmeal is usually thought of as pretty basic, it can actually be turned in a fancy as hell meal that'll make you feel like royalty when enjoying it!

TikTok chef Sad_papi (@sad_papi) is proving us right with his fancy oatmeal recipe: a beautiful, pear-flavored oatmeal infused with caramelized honey and topped with chopped hazelnuts and fresh blueberries. In his tutorial, he shared a fan of his had been dropping requests for "fancy" oatmeal in the comments; thus, this honey pear masterpiece was born. To the naked eye, this recipe may look extra high-end (we're talkin' worthy of Queen Elizabeth II oatmeal here), but if you're a true oatmeal-lover, you know it's all in the fruit and caramelization. You might even have most of the ingredients on hand, too.

This recipe is made for the everyday cook, so the next time you're craving a hot bowl of oatmeal, watch the video and follow the steps ahead for a truly *elevated* oatmeal experience.

He doesn't specify the quantity of honey, butter, or cinnamon to include, so we recommended the following, but also feel free to use your best judgement. 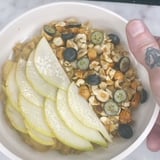 TikTok
TikTok's Remi Bader Says Her Binge Eating Is "Not Getting Any Better," So She's Seeking Help
by Alexis Jones 13 hours ago