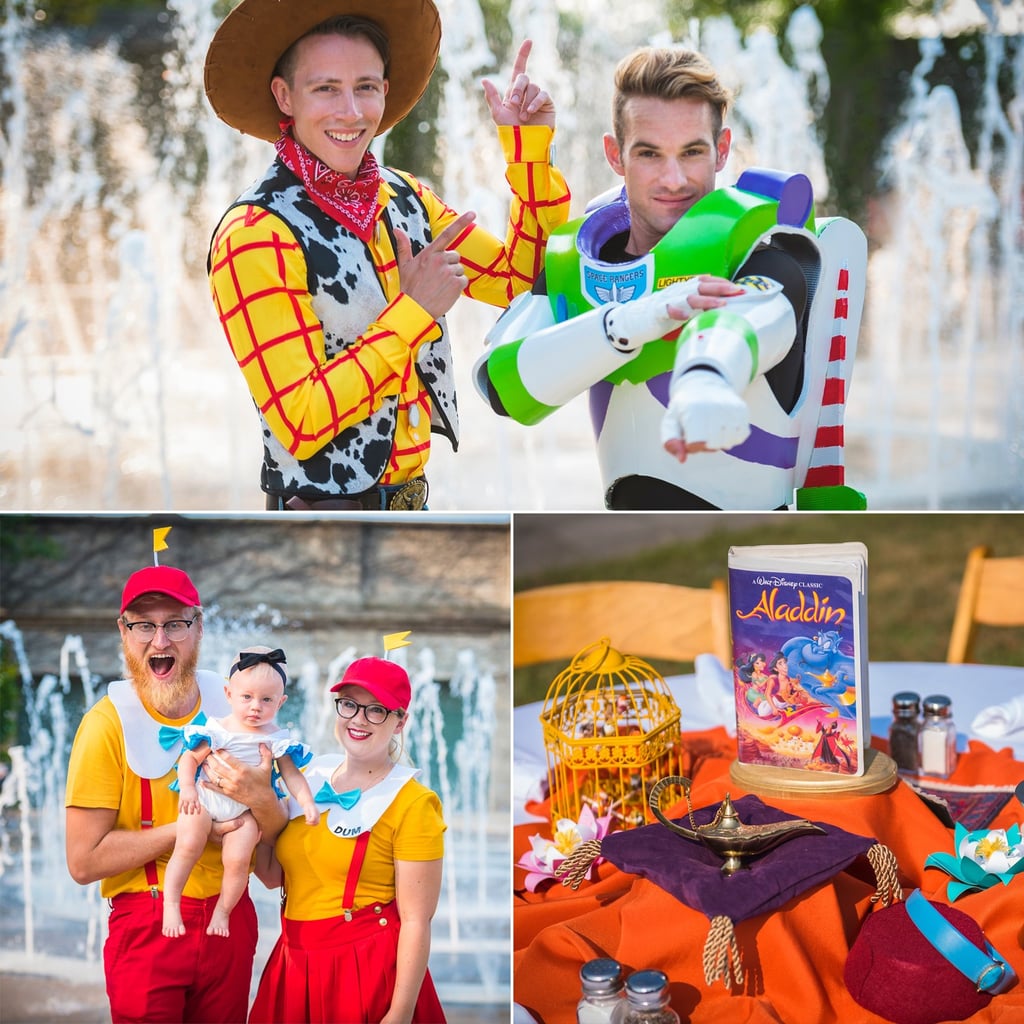 I don't care if your heart is as frozen as Elsa's castle — it's about to melt into a puddle of emotions when you see the lengths this couple went to to throw their ultimate Disney dream wedding. Garrett and Jason, aka Woody and Buzz, went all out with their 2018 Disney-themed big day, and no detail was ignored. The best part? Every single guest (including their dog) dressed in costume as a different Disney character. Honestly, we can't get over it. And coming in at a close second in our books is the themed tablescapes, each based on a different Disney movie (complete with VHS tape).

Garrett and Jason met at a friend's New Year's Eve party, and what they didn't know until their wedding day was that Garrett's parents and grandparents also met on New Year's Eve! It was meant to be. Here's what else Jason told us about their big Disney day. See all the photos (including their sweet wedding video!) ahead!

Related:
The Ultimate Ranking of Every Disney Movie Wedding — From a Villain's Fiasco to Magical Romance

POPSUGAR: What was your favorite decorative or event detail of the day?

Jason: Probably the table decorations we made by hand. We obsessed over every detail for the past year. We used those classic Disney VHS clamshells to signify the table name and theme. We chose the VHS clamshells since we both had them and watched them so much they got wore out when we were kids. For the newer movies that were never released on VHS (such as Moana and Up), I designed the VHS covers for them. Each table had elements from the movie; it looked like the movie came to life on the table. There was at least one light-up or glow-in-the-dark element at each table to make it extra magical.

Another one of our favorite parts is our choreographed first dance. It was arranged and instructed by our great friend Alesha Bales, who weaved together a jazz version of "You've Got a Friend in Me" with a Spanish version of the song. She mixed elements from foxtrot, salsa, tango, and paso doble into the dance.

POPSUGAR: What was the most emotional moment of the day?

Jason: The ceremony, because Garrett cried, and he never does that! During our ceremony we had a mixing of the mai tai to signify the good, the bad, and all that comes with a marriage. We went with a mai tai since we love tiki drinks and we travel the country visiting tiki bars. The mai tai was also our signature drink for the wedding.

POPSUGAR: What inspired the overall look and theme of the wedding?

Jason: We had both been fans of Disney and Disney parks growing up. Garrett would frequently visit his friends who worked in the park, while I was inspired by the artists and Imagineers who influenced me to pursue a career in graphic design. But it wasn't until our first trip together to Disneyland that the love for Disney became more of an obsession.

POPSUGAR: Why did you decide to do Disney costumes?

Jason: We love Halloween, and we throw an elaborate themed party every year. We also enjoy Disneybounding and cosplay at Comic-Con. Family and friends must have thought we were crazy to have a costume wedding in the middle of August. But we were happily surprised that most all of our guests were really into it and dressed for the occasion, even our dog!

Garrett wanted to dress as Buzz and Woody because "You've Got a Friend in Me" is one of his favorite Disney songs, and he has known for a long time he wanted that to be the song he danced to as his first dance. So, of course, I had to be Sheriff Woody. Both characters are reminiscent of each of our personalities.