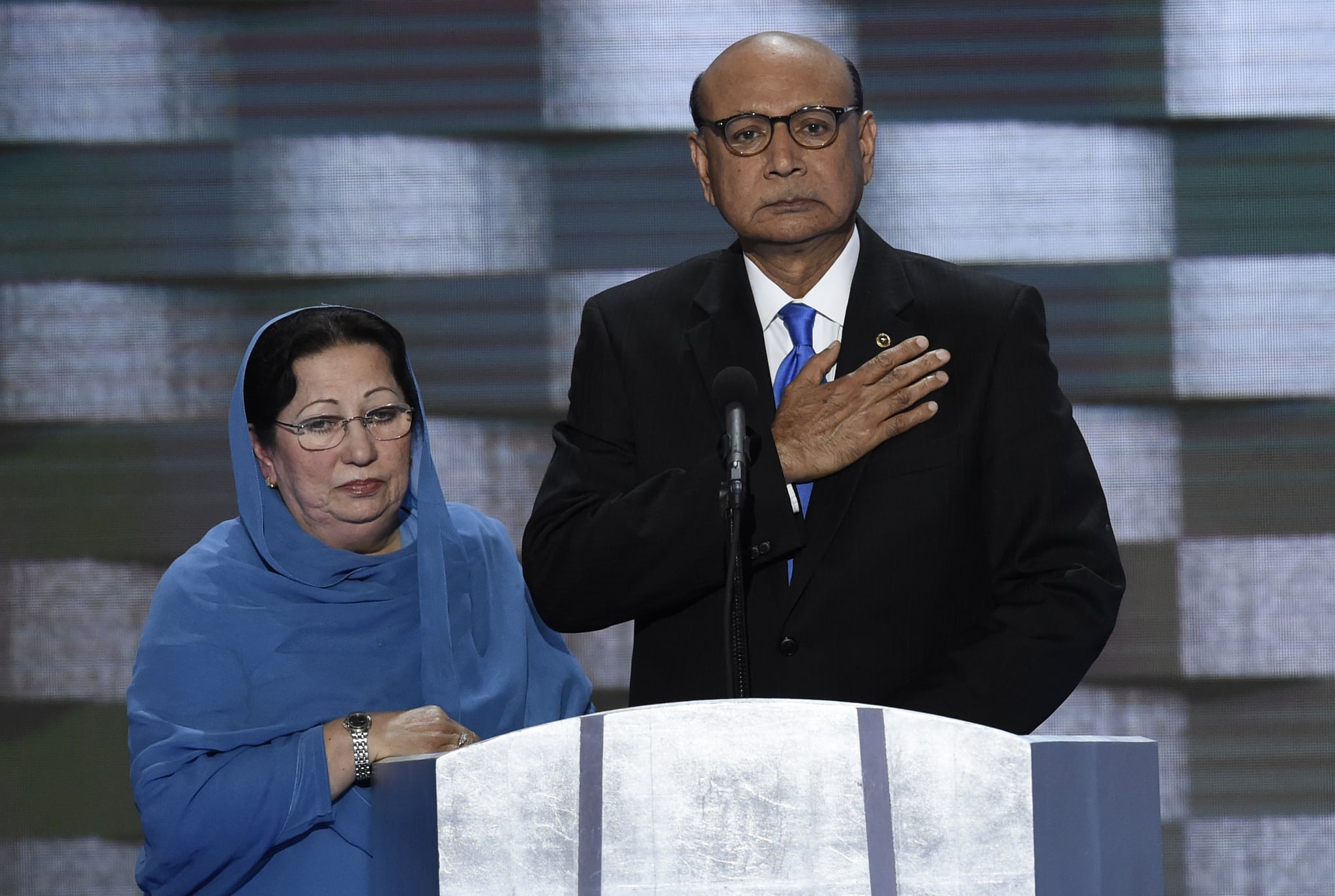 You've probably never even heard her name before. But now it's impossible to forget about Ghazala Khan, the woman who stood next to her husband at the DNC when he gave one of the most searing criticisms of Donald Trump thus far in this election.

Khizr Khan's speech on Thursday night quickly went viral after he pulled out the US Constitution and offered to lend it to Trump. The Muslim immigrant criticized the GOP nominee for being anti-American and calling for a ban on all Muslims. Khizr and Ghazala were there to honor their son Humayun, a captain in Iraq who was killed while protecting his troops from a suicide bomber in 2004. Humayun was an immigrant too; he came to the US when he was 2 years old.

Khizr Khan asks Trump: "Have you even read the U.S. Constitution? I will gladly lend you my copy" #DNCinPHL https://t.co/jTGPxm3GCV

Naturally, Trump responded to the criticism — and his first instinct was to attack Ghazala, the grieving mother, and her culture. Out of all his controversies, this could turn out to be one of the biggest mistakes of his campaign.

Here's what Trump said in an interview with ABC News: "His wife, if you look at his wife, she was standing there. She had nothing to say. She probably, maybe she wasn't allowed to have anything to say." This assumption that Ghazala wasn't allowed to speak because of the Islamic culture's treatment of women has unsurprisingly prompted a firestorm of criticism against Trump from both parties.

This could turn out to be one of the biggest mistakes of his campaign.

Prominent Republicans like John McCain, Paul Ryan, and Mitch McConnell have condemned the GOP nominee for his remarks and tried to distance them from the Republican Party. McCain called upon Trump to set a better example and referred to his comments as defamation. "It is time for Donald Trump to set the example for our country and the future of the Republican Party," he said in a statement on Monday. "While our Party has bestowed upon him the nomination, it is not accompanied by unfettered license to defame those who are the best among us." President Obama also made a reference to the controversy, saying, "Gold Star families have made a sacrifice that most of us cannot even begin to imagine." (Gold Star families are those who have lost loves ones in military service.)

Trump's ignorant comeback isn't just troublesome because he's making a generalization about a group of people he knows nothing about or because he's targeting a grief-stricken mother. Turns out, Trump was completely wrong about why Ghazala didn't speak. On Sunday, she wrote an op-ed in the Washington Post, explaining that her husband asked her to speak but she declined because she'd get too emotional. "I cannot walk into a room with pictures of Humayun. For all these years, I haven't been able to clean the closet where his things are — I had to ask my daughter-in-law to do it," she wrote. "Walking onto the convention stage, with a huge picture of my son behind me, I could hardly control myself. What mother could? Donald Trump has children whom he loves. Does he really need to wonder why I did not speak?"

She also appeared on CNN saying her neither her religion nor her family ever stopped her from saying what she wanted to say.

Even more revealing is that Ghazala had much more of an influence over the speech than Trump could have ever imagined, helping her husband edit the speech till it was worthy of the spotlight. Khizr said in an interview with Meet the Press: "Those were my thoughts and edited by my wonderful wife. I would read it to her while getting ready, while traveling on the train. And she would edit. And she would say, 'No, you're not going to say this. No, this is not for the occasion.'" The comments she edited out were about how Melania Trump plagiarized part of Michelle Obama's speech at the RNC.

You have to ask yourself: does this man even know what sympathy is?

In an interview with MSNBC, Khizr also called his wife his coach. "I was strengthened by her presence. Forty years of marriage has brought us in a position where we are strength for one another," he said. "So her being there was the strength I could hold my composure."

Ghazala is not the first woman to be insulted by Trump and she won't be the last. But targeting the mother of a fallen soldier is a new low and an alarming reflection of his true character. You have to ask yourself: does this man even know what sympathy is?

These comments probably won't change the minds of people already committed to voting for Trump. But they might be enough to motivate people who would otherwise stay home on Nov. 4 to get out and vote for Hillary Clinton. And this election year, every vote matters when it comes to keeping Trump out of the White House.