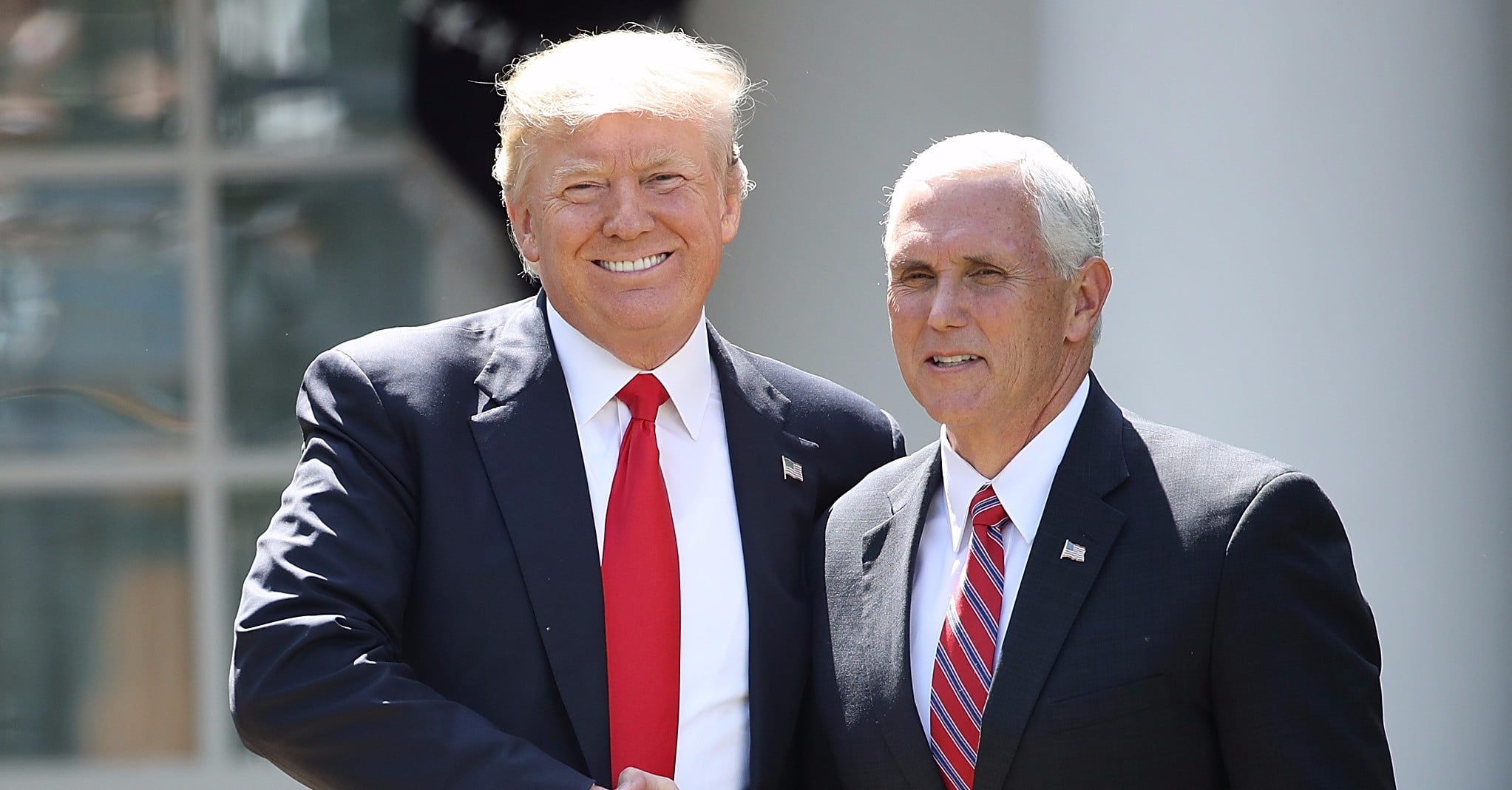 The Oct. 23 issue of The New Yorker features a long profile of our current vice president titled "The Danger of President Pence." The article details the perils of having Mike Pence step in as president if Donald Trump is impeached. It details how Trump secretly digs at his right-hand man behind closed doors. It talks about the glaring differences between the two men.

And then there's this: buried deep within the text is an anonymous account of a horrifying offhand laugh Trump apparently had while talking about the rights of LGBTQ+ Americans. According to a source, Trump and Pence met with a legal scholar to discuss the Roe v. Wade abortion case as well as LGBTQ+ rights. "When the conversation turned to gay rights," the article recounts, "Trump motioned toward Pence and joked, 'Don't ask that guy — he wants to hang them all!'" The mini anecdote begs the question: what's more horrifying? The fact that Trump may have made the joke or the fact that this is how the vice president of the United States' views are being interpreted by our president?

Since the publication of the article, the report has made a splash on social media. Some, including Gavin Newsom, remarked that it will barely make a ripple, regardless of how incendiary it is. Others are calling into question the validity of the sources, noting that they're unreliable and anonymous and therefore the story should be taken with a grain of salt.

Yet beyond this one particularly disturbing anecdote, the article does much more to soundly argue that Pence would be a dangerous president for America, particularly when it comes to his record on LGBTQ+ issues over the years. Though he has denied it, there is a wealth of evidence that suggests he believes in conversion therapy, which purports to change a person's sexuality or gender identity. Moreover, he's reportedly argued for public funding of this practice. But Pence's discriminatory behavior doesn't stop there. According to the New York Times, he has a long history of opposing legislation that would protect the LGBTQ+ community.

When Pence was governor of Indiana, he signed a religious freedom law that would allow business owners to discriminate against LGBTQ+ people if they felt like their faith was somehow being compromised. According to an archived version of his 2000 senatorial campaign website, "Congress should oppose any effort to put gay and lesbian relationships on an equal legal status with heterosexual marriage." The same campaign advocated to remove government funding of HIV/AIDS treatment, especially "organizations that celebrate and encourage the types of behaviors that facilitate the spreading of the H.I.V. virus."

Related:
This Federal Judge Had a Brutal Rebuttal For Homophobic Business Owners

In 2003, Pence signed a Federal Marriage Amendment proposal for the Constitution, which sought to define marriage as a union between a man and woman. He opposed the repeal of Don't Ask, Don't Tell in the military, saying, "We ought not to use the American military as a backdrop for social experimentation."

All things considered, Pence's attempts to limit LGBTQ+ civil liberties have been apparent for quite some time. Sheila Suess Kennedy, an Indiana University professor and political insider who has met Pence in person, once stated bluntly: "He is convinced that God doesn't like gay people and that's it."

What's certain is that the very fact that an anecdote like this was printed in a respected national magazine and strikes so many Americans as reasonably believable tells us a lot about the sad, scary state of American leadership in 2017.