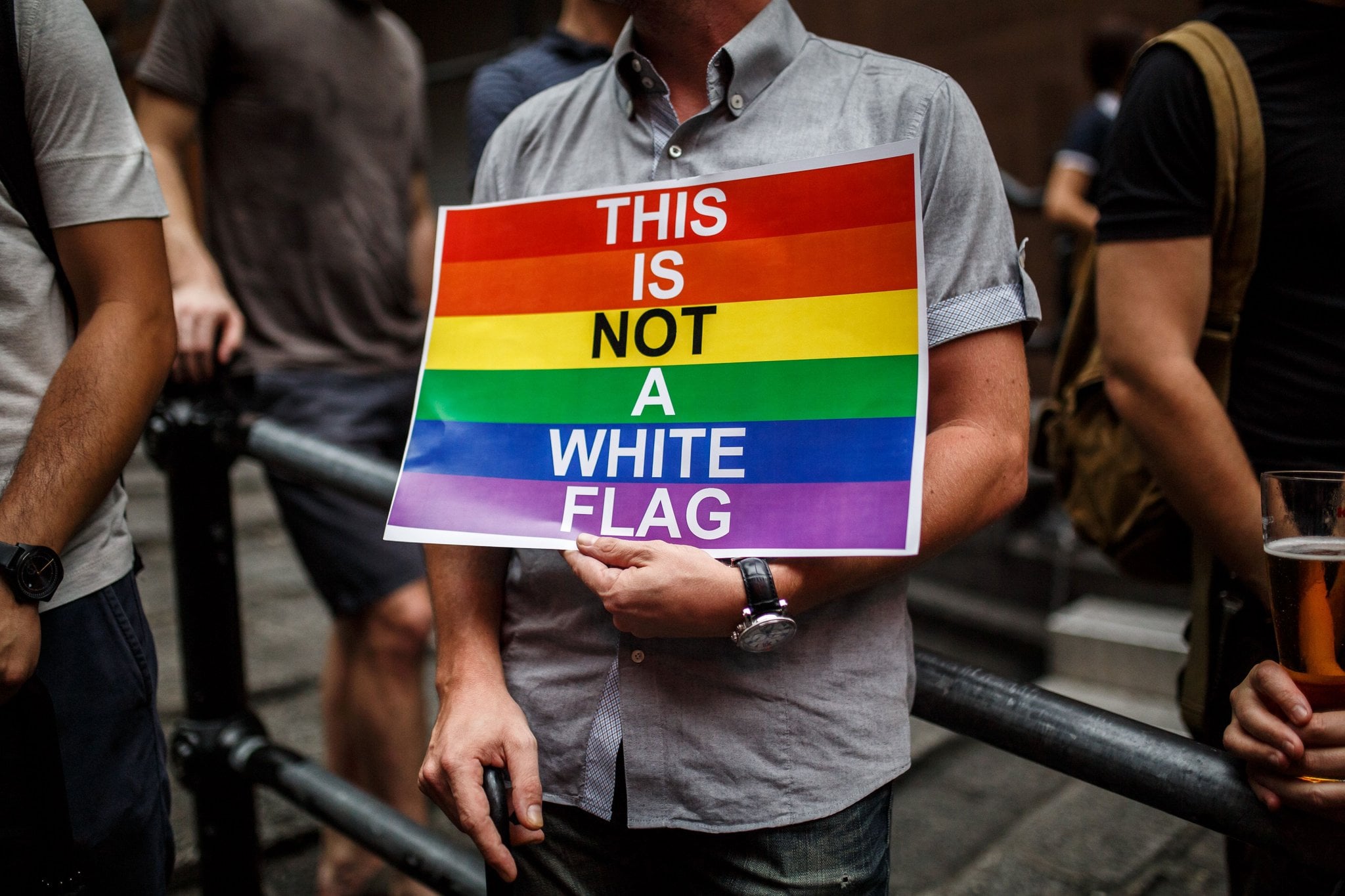 I'm gay, but I don't think of myself as a minority. I have never felt scared because I'm gay. But what happened last week in Orlando, FL, forced me to acknowledge that I've been living in a bubble. Whether I like it or not, I am a minority, and I have a responsibility as a gay person to acknowledge that our work isn't done. If I don't, I'm part of the problem.

Like the rest of the world, I woke up on the morning of June 12 to the news of another mass shooting in America. It wasn't immediately reported that the shooting was at a gay club. Just a nightclub. A random mass shooting. Heartbreaking, of course, but a long way from my reality. When I learned that the shooting had occurred at a gay club, I still refused to believe that it was anything but a random act of violence. I felt deeply sad for the innocent victims and their families and friends, but I wasn't specifically mourning the loss of my LGBTQ brothers and sisters. I didn't see it that way. The shooter could have chosen any club. He just chose this one not for who was inside, but because he wanted to hurt people and it didn't matter who they were.

It's easy for me to be openly gay, but it still isn't easy for everyone, and I need to do a better job recognizing that this fight isn't over.

As the days passed, I was surprised to watch the coverage of the Orlando massacre morph into a larger conversation around gay rights, about how there is still work to be done, about how we will continue to fight and we will not be silent. I wondered: why is this being discussed as an act of violence against the gay community and not just an act of violence? I am a person first and gay second or third or even further down than that. Weren't these lives lost, people first and gay second?

I watched people of all sexual orientations come together over vigils and moments of silence to stand together as one. But against who? Against cowards who will wield a semiautomatic weapon against a bunch of innocent people who were partying in a safe space? Or against people who disagree with gay marriage, parents who are estranged from their gay children because of who they are, employers who could fire us because of our sexual orientation, and landlords who can kick us out of our homes?

I am gay, but I've never seen myself as someone who had to fight to enjoy the same rights as others. I have a job, which I'm good at, and I'm valued for that, not for who I go home to at night; if that wasn't the case, I would find another place to work. I have a roof over my head, and as long as I continue to pay rent every month, that will continue to be the case; if it wasn't, I would find another place to live. I have friends who love me for me, not who I love, and if they didn't love me, they wouldn't be my friends. I have never really lost anyone or anything because I am gay. I'm lucky enough to have been able to design a life for myself where my sexual orientation does not negatively affect me.

But the Orlando shooting made me realize that I'm partly to blame. My comfortable existence has made me complacent. It's easy for me to be openly gay, but it still isn't easy for everyone, and I need to do a better job recognizing that this fight isn't over.

My straight male colleagues mention their wives during business meetings, but I don't. Why don't I? Why can't I? My marriage is legal. My wife is a part of my life and part of my everyday dialogue, but I fear that mentioning her might be considered inappropriate and potentially lose me a business deal. Is that on me or is that on society? Is that my own insecurities or is that reality? I honestly don't know the answer to that question, but I do know that I am contributing to the problem, because I let society dictate my words and my actions, and that makes me angry. At myself and at society.

As much as I want to tell myself that it could have been any club, the fact remains that it was a gay club, and to many people, "gay" is still "other." LGBTQ people are still the target of more hate crimes than any other group. As recently as 1973, 32 people were burned alive during a massacre at a gay bar in New Orleans, and many families didn't even bother to claim their relatives who died. While I'm grateful that the response to the tragedy in 2016 shows how far we have come since 1973, we still have a ways to go.

While I'm grateful that the response to the tragedy in 2016 shows how far we have come since 1973, we still have a ways to go.

I spent a lot of time in gay clubs when I was younger. I don't frequent them very often anymore: these days, my wife and I cook dinner and watch movies, like the older, boring, regular couple we are. But I've been in those clubs, and I promise you, if you're not gay or bi or transgender or queer, you just can't understand. For LGBTQ people, nightclubs are still the safest, most welcoming, most freeing places you can walk into. No judgment, no side glances, no whispers; just love and inclusion and really damn good music!

To have that world shattered for those who were there, those who could have been there, or those of us who used to be there is incredibly tragic. It is a reminder to all of us that when we walk down the street holding the hand of our same-sex partner, we could be the victim of ridicule — or worse. It's a reminder that when my wife leans in to kiss me in the street, I still assess my surroundings to make sure it's safe.

But I can't let Orlando stop me from doing that. I will kiss my wife in the street; I will hold her hand. I will say the words "my wife" in business meetings. If I don't, I'm only delaying our society's acceptance, and that isn't society's fault, that's my fault. I own that.

So, am I a victim? Hell f*cking no. No one can make me a victim; I won't let them. Am I a minority? Maybe, but only in the minds of those who don't get it or don't agree, and I don't care about them. I don't want to have those people in my life, and I don't need to. Am I scared because I am gay? Absolutely not. I have no reason to be. If someone is going to hurt me, it could be anywhere. It could be at a movie theater, or a college campus, or a preschool for that matter. If someone is going to hurt me, it's unlikely going to be because I'm gay. But I also can't be afraid to be myself; I have to try to make a difference with my actions. If I'm scared, hate wins.

Digital Life
I Started Putting My Phone in a Different Room at Night, and It Really Improved My Mental Health
by Caitlin Gallagher 4 hours ago