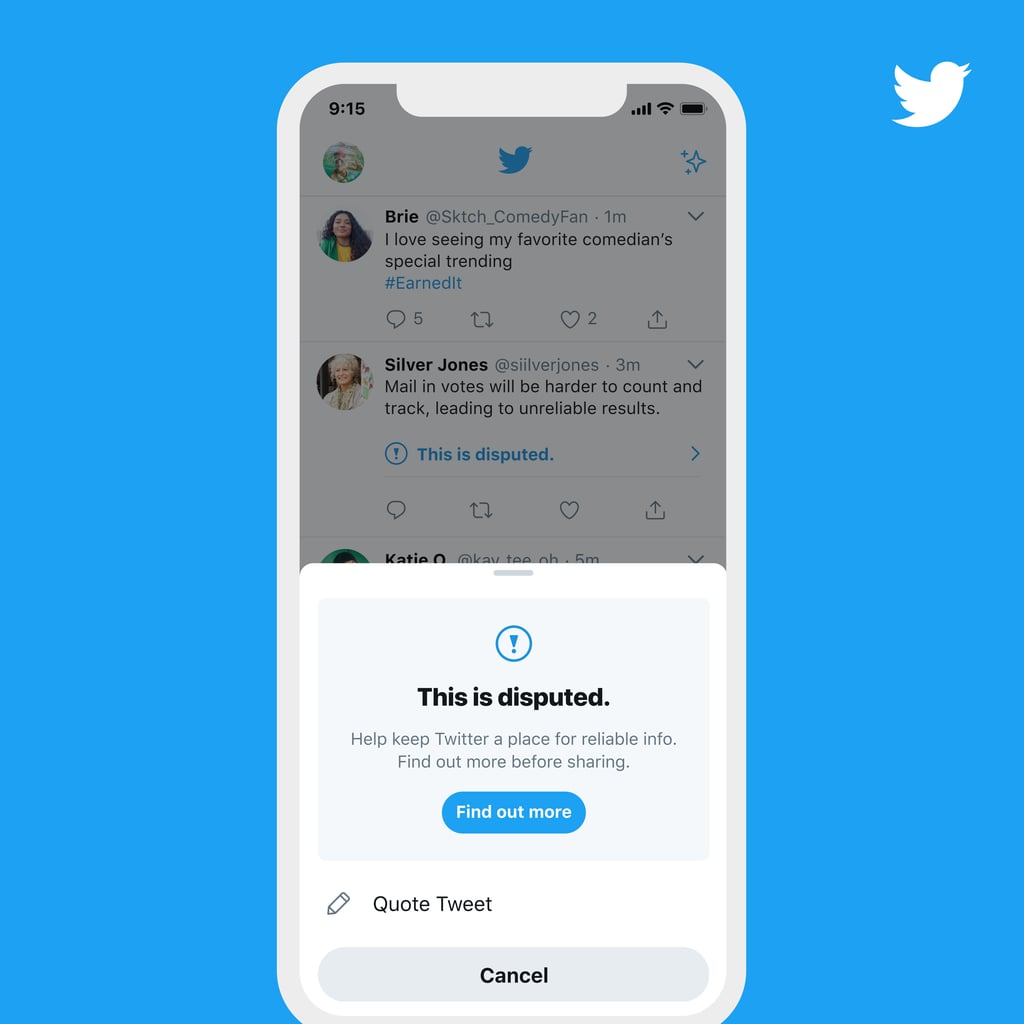 Ahead of the 2020 presidential election, Twitter has announced an update to its Civic Integrity Policy to prevent the spread of misinformation as it pertains to voting and election results. "As we continue to protect the integrity of #Election2020 conversation on Twitter, we're announcing new, significant updates today that will bring more context and encourage thoughtful consideration before Tweeting," the social media platform tweeted on Oct. 9. "Tweets which include premature claims of a victory in an election will be labeled and direct people to our official US Election page in Explore. Tweets that encourage others to interfere with the election process or the results will be removed."

The new labeling policy, which went into effect on Oct. 16, was put in place to encourage users to consider why they're amplifying specific tweets and add their own commentary before sharing unverified information. "Starting next week, when people attempt to Retweet a Tweet with a misleading information label, they will see a prompt directing them to credible information about the topic before they can amplify it," Twitter said on Oct. 9. These labels, such as "this claim is disputed," will primarily target tweets that include false or misleading information about how to participate in an election, "information intended to undermine public confidence in an election," and information intended to intimidate or dissuade people from participating in an election or other civic process. This policy also applies to presidential candidates.

In addition to labeling rumors and unverified claims for users in the US, Twitter will also prevent tweets that have been "followed by" and "liked by" accounts you don't follow from showing up in your timeline. Also, the site will only highlight trending content in your "For You" tab if that content includes additional context.

To encourage a more thoughtful approach to sharing information, the site has also rolled out a new "Quote Tweet" function that prompts users to add their own comments to tweets before reposting them to their own dashboard. Similarly, Twitter has included a pop-up that reads "headlines don't tell the full story" if a user attempts to retweet an article without clicking on it. The new function seeks to inspire readers to research the information presented to them before sharing. "Our goal is to continue to provide access to critical information and encourage participation in the conversation during #Election2020," the platform tweeted.

For more information on what counts as a violation and how to report these posts, read Twitter's full Civic Integrity Policy.

Related:
It's Hard to Pick Kamala Harris's Best VP Debate Moments, but Here Are Some of Our Favorites
Previous Next Start Slideshow
Politics2020 ElectionTwitterUS News