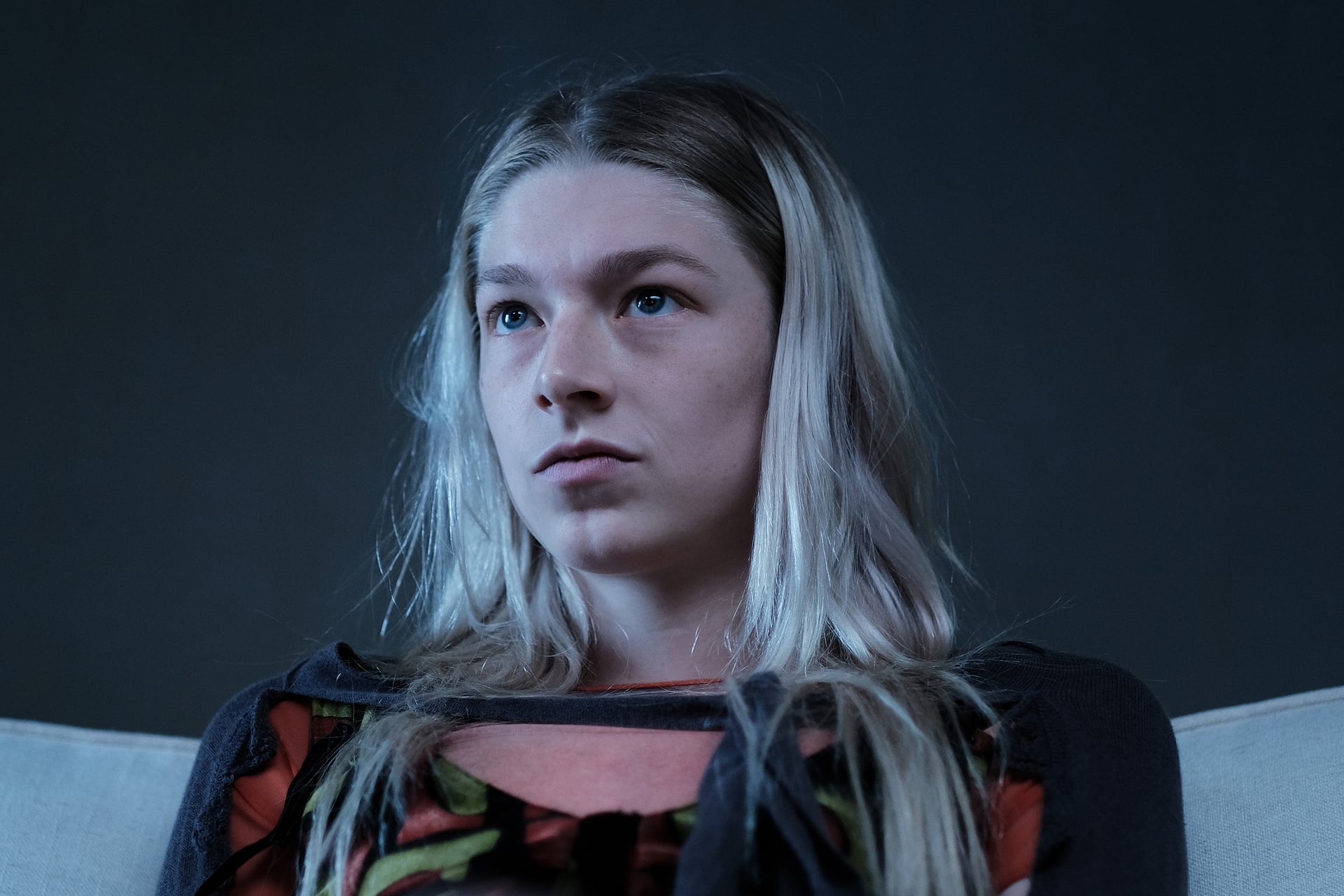 A lot of great things happened last week: Kamala Harris became the first woman, Black woman, and woman of South Asian descent to become our vice president, Chrissy Teigen got a follow from the POTUS Twitter account, and the second and final bridge episode — "F*ck Anyone Who's Not A Sea Blob" — of Euphoria finally aired. While all three made us happy to witness, only one had us crying to the tune of Lorde's "Liability."

Thanks to Euphoria creator and writer Sam Levinson and Hunter Schafer, who plays Jules on the show and co-wrote this episode, we finally got a deep dive into the mind of the character many fans painted as the villain in season one. She forced Rue (played by Zendaya) to her breaking point, they accused; she broke Rue's heart, they said. And yet, we learn this wasn't a fair examination of Jules at all. In this episode, we find Jules in therapy after a failed attempt at running away, heartbroken that's she's lost Rue, and completely stripped of the usual bold makeup we're so used to seeing the character in. This, according to makeup department head of the show, Doniella Davy, was totally intentional.

Euphoria was planned to begin production on the show's much-anticipated second season not long before the novel coronavirus hit the US and forced Hollywood into a full-on pause. It would be months before Levinson decided to create two bridge episodes focused entirely on Rue and Jules, respectively. Still, Davy had no idea the binder she filled with looks for Jules would go virtually unused. Not only did much of the script for this episode include season one flashbacks, but it also featured Jules bare-faced in many of the present-day scenes.

"We chose to really pare it down and let Jules's naked headspace take the stage," Davy told POPSUGAR. "It was a different approach for me because typically we know her makeup always reflects the mood she's in, but this time it was so much about peeling away all of the layers and getting to the real Jules."

"[Jules] uses her makeup very strategically and she's very aware that she's using her makeup to embrace this femininity and conquer femininity."

Jules talks a lot in this episode about "what's next" for her. This includes potentially going off some of her hormones, which leads to an eye-opening conversation about being transgender and femininity; what it's meant to Jules, what it means now, and how she no longer wants to cater to the male gaze. This idea and how it extends to the persona she creates through her makeup, Davy explained, is something that's always been there for her and Schafer while creating Jules's beauty looks, it was just never written into the dialogue of the script.

When Davy and Schafer would decide to create more "feminine" looks in the past, it was on purpose; the same sentiment applied when creating a look that's less so. There was an intention behind all of it and — spoiler — many of the slightly more feminine looks appear when Jules is pursuing a relationship with a man. "[Jules] uses her makeup very strategically and she's very aware that she's using her makeup to embrace this femininity and conquer femininity," Davy explained, noting that, by this special bridge episode, Jules's perspective shifts: she feels like she's been conquered.

The only time Jules is seen with makeup on in this episode is during flashbacks, some of which are extensions of previous scenes from season one, like the Halloween episode when Jules was Juliet (from the masquerade scene in Baz Luhrmann's Romeo + Juliet) and had gold flakes decorating her eyes — a replication Davy admitted was not the easiest considering how delicate those flakes are ("They tend to fly everywhere if you, like, breathe on them," she said). Many of the other scenes give the audience insight into how Jules struggled with not only falling in love with a boy online, but also the emotional trauma of her mother's addiction. While this episode does give us a glimpse at the makeup we know and love from Jules, including a new iteration of the famous cloud eye makeup, there — as her therapist aptly states — is a lot more to unpack here.

Q: #AskHunter whats the most thing you relate to jules about?
- @gwshaylor

Of course, none of this means we won't see Jules rock some seriously inspiring eye makeup in season two, because we will. Davy has plenty (and we mean plenty) of ideas for the character's story evolution, one so many viewers can relate to. In a Twitter Q&A for the episode's premiere, Schafer told fans that the one aspect of her character she relates most with is that Jules both very much knows who she is, but is also figuring out who she's becoming.

While Jules isn't likely to be directly affected by COVID-19, it's no secret that many young people are pursuing this kind of unbridled self-expression and questioning. And this isn't new: queer theorist Judith Butler talked about this 30 years ago. Still, even decades later, we know it's nearly impossible to escape gender normativity, but characters like Jules are working damn hard to undermine it. We're just the lucky ones who get to watch it unfold.