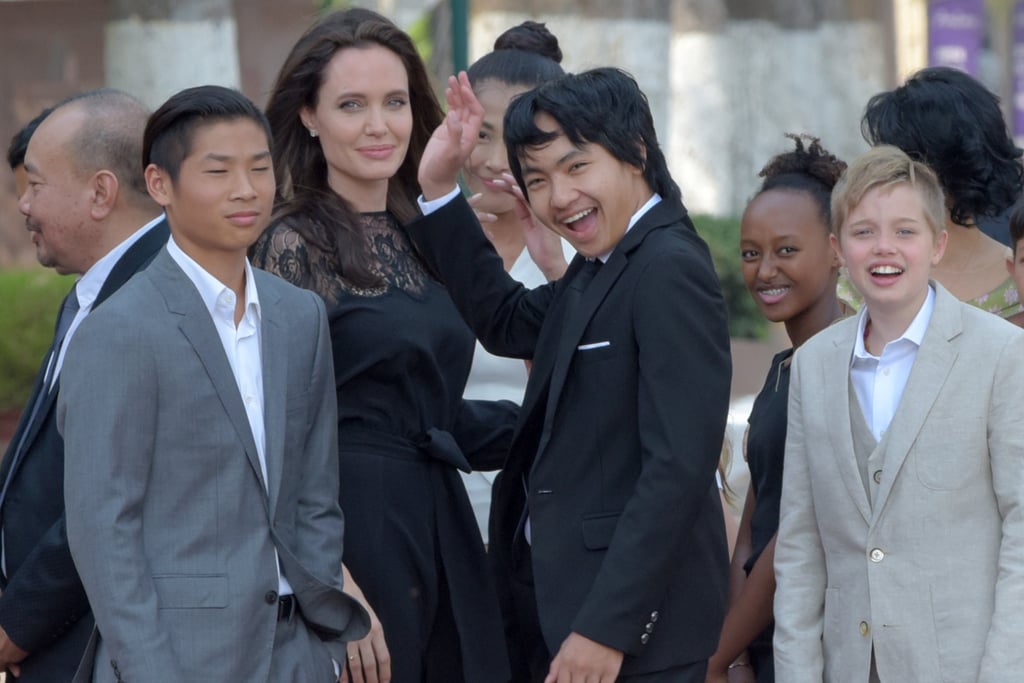 Nearly five months after Angelina Jolie filed for divorce from Brad Pitt, the actress is back in the spotlight. On Saturday, Angelina pulled double duty and attended a panel and the world premiere of her new film, First They Killed My Father, in Siem Reap, Cambodia, with her six kids — Maddox, 15, Pax, 13, Zahara, 11, Shiloh, 10, and twins Knox and Vivienne, 8 — in tow. Clad in a silky black dress, Angelina appeared to be in good spirits as she waved to nearby onlookers and spoke at a press conference with actress Sareum Srey Moch. Both Maddox and Pax were involved in the film's production, but it was an especially big day for Maddox, who was born in Cambodia (Angelina adopted him in 2002). During the premiere, Angelina spoke about her deep connection to the country, saying, "Without Cambodia I may never have become a mother. Part of my heart is and will always be in this country. And part of this country is always with me: Maddox."

Maddox also got up on stage and gave a speech of his own, saying, "Thank you everyone for attending tonight. We finally made it. It's a great honor to present this film to all of you, and to stand by my mother and my family." But perhaps the cutest part of the event was when little Shiloh took the microphone and told the audience in Khmer, "My name is Shiloh and I love Cambodia." While Angelina has been maintaining a low profile, her divorce from Brad has been at the top of headlines. Just last month, the duo's reps released a joint statement, saying, "The parents are committed to act as a united front to effectuate recovery and reunification." As the estranged couple continue to finalize their divorce, it's nice to see Angelina looking so happy.