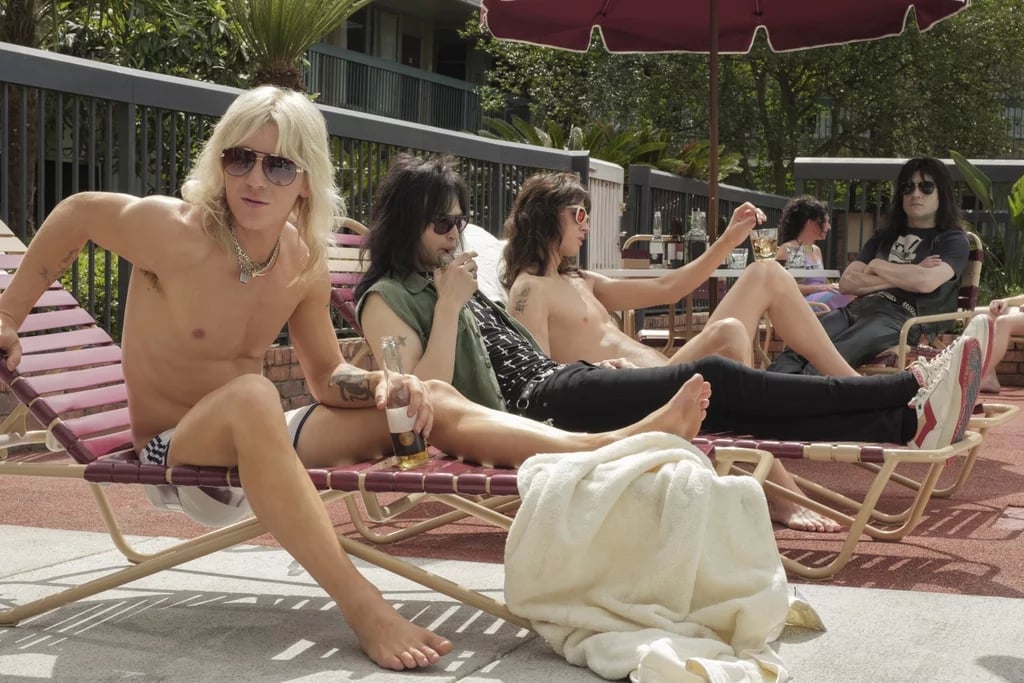 If you thought Bohemian Rhapsody was wild, then you need to check out The Dirt, the latest rock band biopic that just premiered on Netflix. Based on Mötley Crüe's bestselling 2001 autobiography The Dirt: Confessions of the World's Most Notorious Rock Band, this long-awaited biopic follows the story of the heavy metal band's rise from obscurity to super stardom and international fame during the course of the 1980s, and it's as insane as you would imagine.

The book (which is supposedly all true, as unbelievable as it seems) boasts some of the grittiest and most disturbing tales of drugs, alcohol, and groupies that you could imagine — for instance, Vince Neil really did crash his car, and believe it or not, Nikki Sixx's overdose was even worse than the movie portrays. But here's one thing that people seriously can't believe is true: did Ozzy Osbourne really drink Nikki Sixx's urine? We're sorry to say that yes, that really did happen, and we're as grossed out as you are.

This wouldn't be the first time that Ozzy Osbourne (best known as the lead vocalist of the heavy metal band Black Sabbath) pushed the envelope when it came to sex, drugs, and rock and roll. Let's remember that we're talking about the same batsh*t crazy guy who once notoriously bit the head off of a live bat onstage. In the movie, the Prince of Darkness (who's played by actor and comedian Tony Cavalero) makes a brief but memorable appearance after tapping Mötley Crüe to open for him on his 1984 world tour.

ADVERTISEMENT
Related:
See How Much the Cast of The Dirt Look Like Their Real-Life Counterparts

While hanging at a Florida resort pool between gigs, Ozzy decides it's a good time to give the band members a little pep talk about the strain of touring and performing — you know, like any well-meaning father figure would. Even if his advice is a bit unconventional (after all, he's wearing a dress that he stole from the purse of an elderly woman at the time), we have a feeling the guys never could have anticipated what happened next.

As the movie graphically depicts, Ozzy concludes his speech by taking out a straw, kneeling on the ground, and snorting up a line of ants from the pavement — after all, what else do you do when you run out of cocaine? Then, the infamous performer pees on the ground, laps it up, and challenges bassist Nikki Sixx (who's played by Douglas Booth) to do the same. One simply does not say no to Ozzy, so Nikki obliges, but before he can drink the urine himself, Ozzy beats him to it. If you think that sounds gross, we can assure you that watching it is 10 times worse.

But is it true? According to the 2001 autobiography, it's totally true, even right down to the dialogue. In interviews, Osbourne has claimed that he doesn't have any recollection of this particular incident, but can we really trust his memory? The band maintains to this day that this is what really happened, and Nikki has confirmed it himself when asked. "We were a wild young band and he kind of took us under his wing," he told Page Six. "We thought we could compete with that, but you can't with Ozzy. He won." We guess our definition of "winning" is a little different than his.

Movies
Calling All Animal-Lovers! These 21 Movies on Disney+ Are Perfect For You
by Samantha Bergeson 5 hours ago