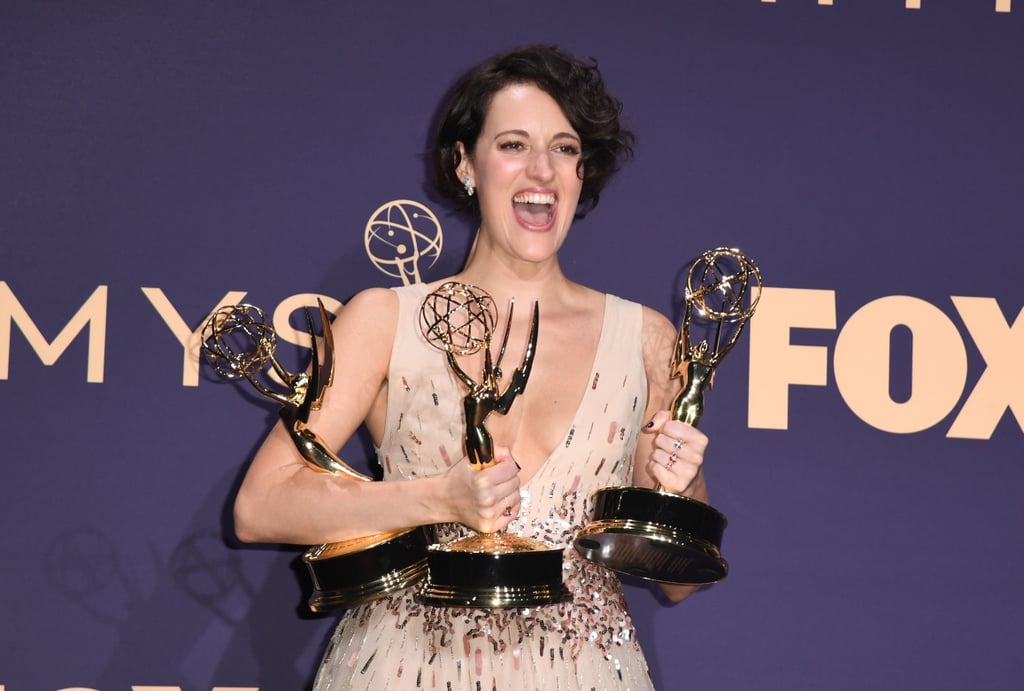 Quick question: is it socially acceptable to plaster photos of a complete stranger all over your refrigerator andor walls? Because quite frankly, I'm feeling inspired to do so after looking at pictures of Phoebe Waller-Bridge having the time of her life at the Emmys. The Fleabag producer and star had quite the triumphant night at the award show Sunday, taking home the trophies for best lead actress in a comedy series and outstanding writing for a comedy series. Oh, and her British series also snagged the outstanding comedy series award, thus confirming that Phoebe's comedic genius is simply unmatchable.

Phoebe dressed to the nines for the Emmys, swapping Fleabag's signature black jumpsuit for a tulle gown covered in sequins that appropriately matched the shiny awards she won. She kicked off her night by walking the red carpet with costars Sian Clifford (Claire) and Andrew Scott ("hot priest"), making us crave a third season of Fleabag more than ever. Later on during the show, a visibly shocked Phoebe graciously accepted her various awards with cheeky speeches that made us giggle, and she took the stage with Bill Hader to present an award to A Very English Scandal actor Ben Whishaw.

Perhaps the best part of Phoebe's victorious evening, however, was seeing her semi-awkwardly yet proudly juggle her three trophies while posing for photos on the purple carpet. I'm personally more than thrilled to see Fleabag finally getting the recognition it deserves, and I'll be celebrating the show's wins by binge-watching the series from start to finish — again. Ahead, take a chronological look back at Phoebe's triumphant night out at the Emmys, from her red carpet walk to her afterparty arrival.