Game of Thrones has become one of the most popular and yet divisive shows on television because of its ability to take well-worn story devices and turn them upside down. For example, consider the long-gestating relationship between Jaime Lannister and Brienne of Tarth.

In the season eight episode titled "The Last of the Starks," the couple take center focus to show how their different views of honor play into their choices for the battle that lies ahead. Their love story is not conventional by any means, but the element that makes their pairing compelling is the same element that ultimately dooms them. On one hand, Brienne is a staunch believer in honor. The term defines her and gives her purpose throughout the show. She is honor-bound to the Starks, and her entire relationship with Jaime hinges on her belief that he is a man of honor — ideally, a man who can evolve beyond the role of an arrogant knight who puts his sister and the glory of House Lannister above all else. Unfortunately, there is a flaw in her belief system: people rarely change simply because you wish it to be true.

Yes, Jaime is a man of his word. We witness that when he arrives alone at Winterfell after the rousing "f*ck loyalty" speech Brienne gives him during the Dragonpit armistice at the end of season seven. During his stay in the North, he rises to Brienne's expectations — asking to serve under her command, acknowledging her service by knighting her, protecting her from wights on the battlefield, and agreeing to stay behind to help her protect Sansa and the people of Winterfell.

But historically, the core of Jaime's honorable intentions stems from his devotion to the Lannisters. He even confesses this to Daenerys and the Northern council upon his arrival at Winterfell: "You want me to apologize. I won't. We were at war. Everything I did, I did for my house and my family. I'd do it all again." After which, Bran follows up with the one Game of Thrones quote that sums up Jaime's entire story arc: "The things we do for love." Of course, Brienne has no way of foreseeing the truth of this moment, but the statement is a reminder to the audience that Jaime's true heart will always lie with Cersei, in one way or another.

That's why I wasn't at all surprised to see Jaime break his word and leave Brienne alone at Winterfell. After all, Cersei is pregnant with his child (despite what she's telling Euron), and he once promised the queen the two of them would stand together against the world. We still don't know his true intentions in going to King's Landing. Many of us were quick to assume he was going back to murder his sister, but the episode's director, David Nutter, said, "it rings more like he's slipping back into that deep bond he has with Cersei."

However, what did surprise me was Brienne's emotional breakdown. What happened to the woman who beat the Hound in combat? I am a firm believer that everyone is entitled to his or her emotions, and the moment in question is certainly a difficult balance between personal history and personal obligation. But on the surface of things, the outpouring of emotion seems bothersome because it, in some ways, negates or overshadows the beauty of them finally consummating their relationship. We're left with the heartbreak of shattered promises rather than the triumph Brienne should feel for taking an active role in the exploration of her sexuality, which is important on a show with so few positive representations of the female experience. 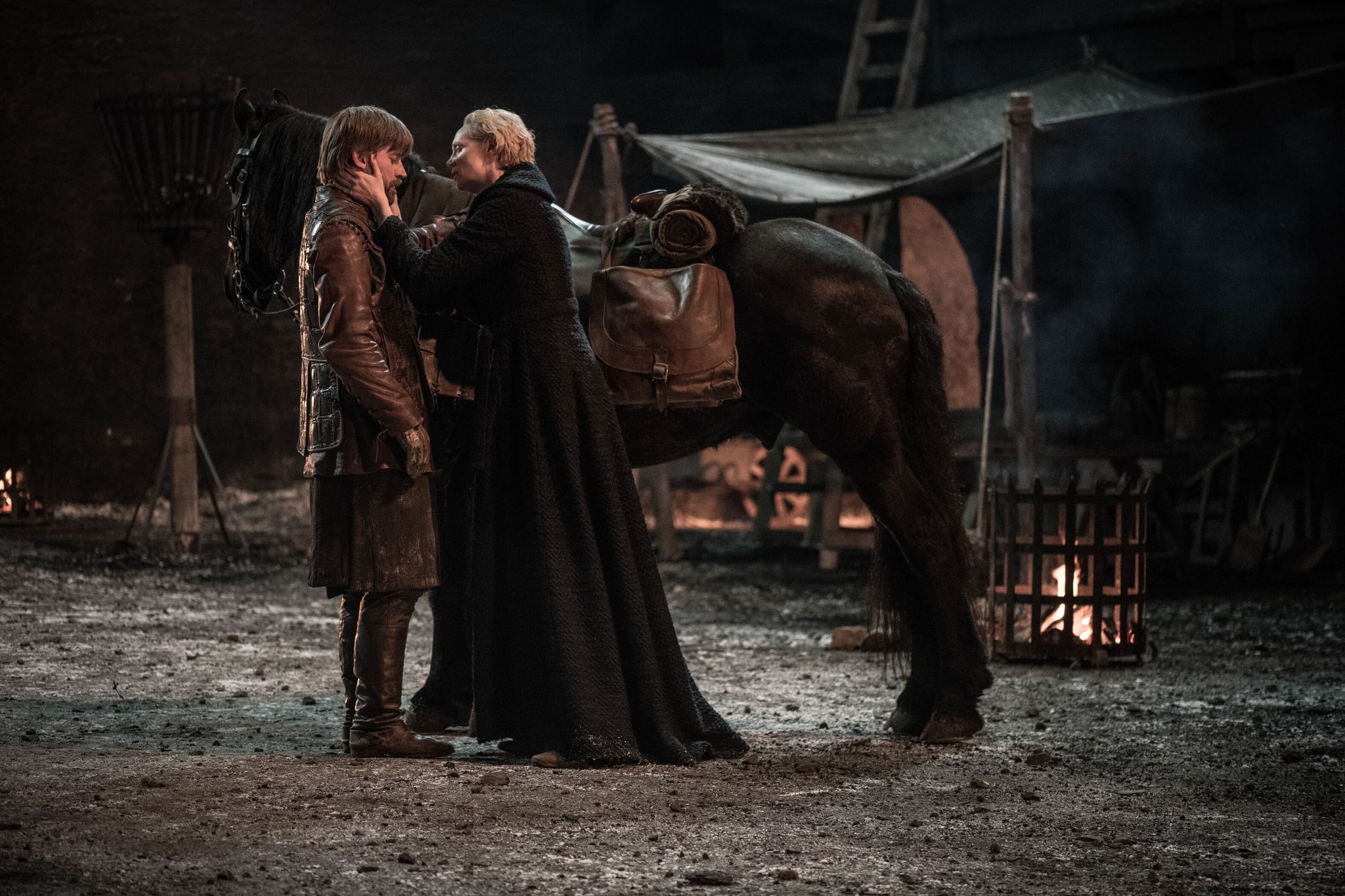 However, as much as I dislike Brienne reacting with such vulnerability to Jaime's departure, the moment serves as a turning point for both characters. But before we can effectively examine the final conversation between the couple, we must first look to the previous scene, during which Brienne reports the outcome of the day's battle in the South. In those moments, she informs Jaime, "Euron Greyjoy ambushed Queen Daenerys and her fleet. One of the dragons was killed, ships destroyed, and Missandei captured." Sansa follows the statement with a snide remark about Cersei, and we can immediately see in Jaime's face that he feels responsible. As if, perhaps, had he been home at King's Landing, he could have tempered his sister's worst impulses. Quick cut to Brienne's bedroom where Jaime, still consumed with guilt, sits awake with plans to slip away into the night while Ser Brienne sleeps.

Brienne's heightened emotion shows us how deeply she cares for Jaime and demonstrates how this new bond has forever altered their relationship.

Put through the scope of those two moments, Brienne's desperation feels a little more valid. She's angry that he plans to leave without an explanation, and she fears for his life as he heads toward a city that Daenerys will surely scorch with retaliatory dragon fire. In many ways, her pleas for Jaime to stay mirror the vision of righteousness she's had for him throughout their relationship. But what's most important here is that Brienne's heightened emotion shows us how deeply she cares for Jaime and demonstrates how this new bond has forever altered their relationship. By showing such a deep reaction in real time, rather than saving those tears for a private moment, she's divulging an area of vulnerability that Jaime (or other characters) can exploit in the future. She's also highlighting that Jaime has taken a major turn (for the worse?) that will inevitably affect his fate moving forward.

Remember, up to this point, the history of their relationship has shown that Jaime best responds when Brienne asserts herself against his vitriol and bad behavior. For instance, during their travels in season three, he taunts her about her inability to protect Renly Baratheon. She rails against him, calling his bluff, and shames him into telling her the truth behind the murder of the Mad King. He does so, and the emotional release of finally sharing his side of the story with someone who will listen causes him to collapse in her arms. This is their normal system of checks and balances. Brienne typically acts as Jaime's backbone, taking charge in a way that's traditionally considered the male role.

So when she falls to pieces during his departure, the scene feels incongruous to their journey up to this point and probably explains why so many of us feel the scenario doesn't ring true. Brienne is not embodying the version of womanhood that has become synonymous with her character. By breaking this cycle, the show now suggests that our two lovers will have to test their values and definitions of honor on each other. That is to say, the pair will more than likely meet on the battlefield in a situation where Brienne will have to kill Jaime to capture Cersei or Jaime will have to kill Cersei to save Brienne.

Otherwise, why bring these two lovers together only to rip them apart?