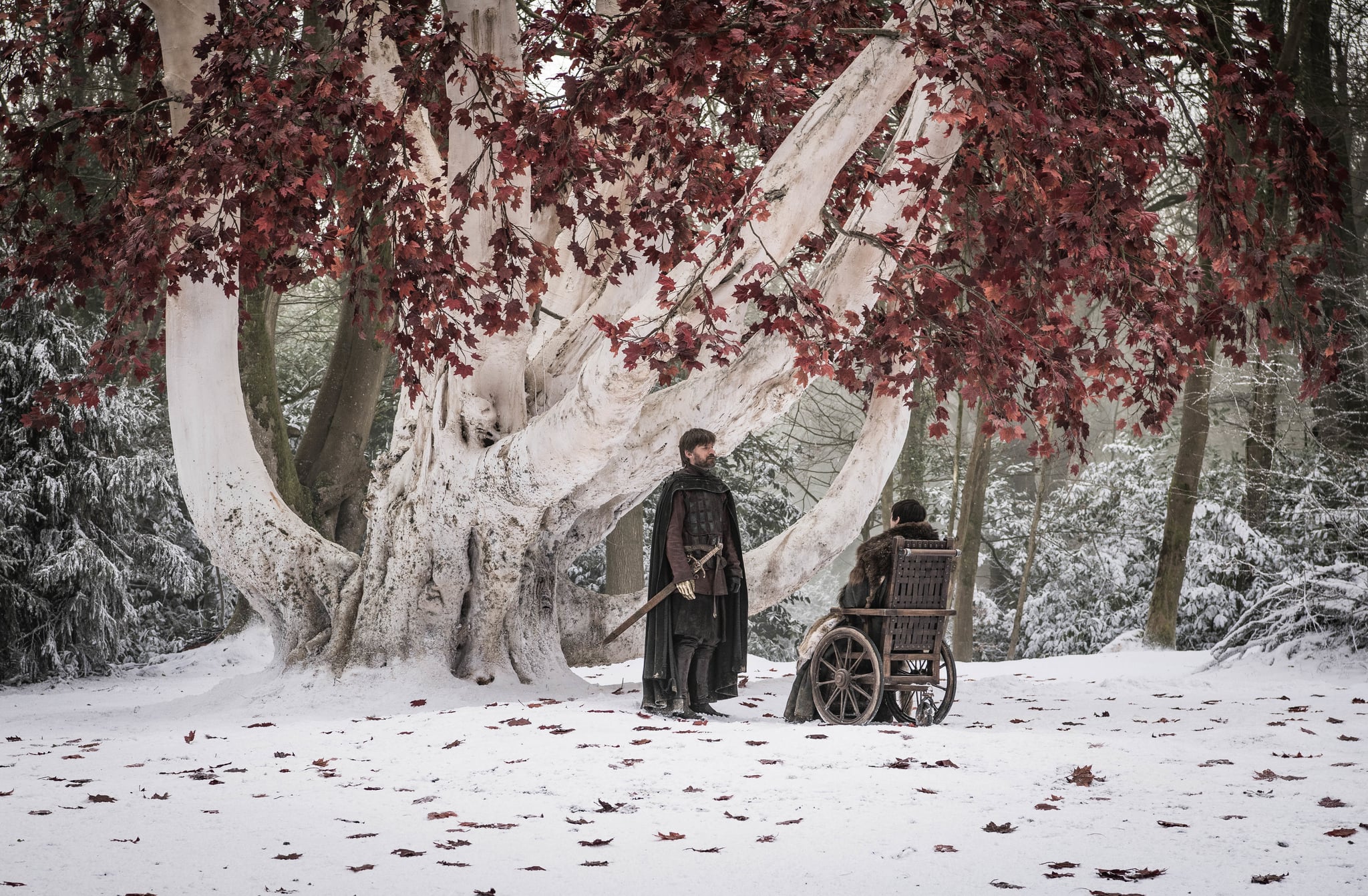 Warning: Spoilers for the most recent episode of Game of Thrones below!

Jaime Lannister has finally returned to Winterfell, but he almost loses his head in the process. The former leader of the Kingsguard arrives in Winterfell in the final seconds of the premiere of Game of Thrones' eighth season, and he stands trial in the opening minutes of the second episode. While Daenerys is quick to suggest he pay for his sins against her family (though we can't say anyone's really mad about that outcome), Brienne convinces Sansa to trust him. Jon agrees, since "they need all the men they can get." But there's one point in the trial that truly seems to shake Jaime, and that's a single comment from Bran Stark: "The things we do for love." The seemingly simple phrase is enough to seriously rattle the older man.

As a reminder, the phrase goes back to season one, when the Jaime we meet is radically different from the one we've grown to love: he's arrogant, obsessed with his twin sister beyond reproach, and carefree as can be. While his sister-lover is married to a terrible king, the Lannisters basically own the Iron Throne and have no need to care for anything else. At this point, Bran is basically a babe at 10 years old and, in his young, adventurous spirit, climbs one of the tallest towers in Winterfell during King Robert Baratheon's visit. It's there he stumbles upon Cersei and her brother getting intimate, and though he tries to escape, Jaime catches him.

Spurred by Cersei's worries that Bran will let what he's seen slip and reveal the true nature of their relationship, Jaime pushes the boy out of the window to what he assumes will be his death, saying, "The things we do for love."

Of course, Bran doesn't die, and because he's so injured, he doesn't journey to the South with his father and sisters. Not only does he survive the fall, but he also survives an assassination attempt and goes on his own perilous journey to become the Three-Eyed Raven. But when Jaime returns to Winterfell in season eight, Bran doesn't reveal their dark past to his siblings, choosing instead to explain his reasoning to the older man very simply: "You won't be able to help us in this fight if I let them murder you first."

To Bran, everything that led to him becoming the Three-Eyed Raven was meant to be, and everyone's journey led them to Winterfell to fight against the Night King and his army. Deviating from that, or regretting the past, does nothing for anyone. Considering Bran has been trying to move things along since the season eight premiere, that seems to check out.

Related:
Game of Thrones: How Brienne's Words to Jaime at the End of Season 7 Made a Lasting Impact

For Jaime, the phrase is the embodiment of who he was in the past, a man willing to do anything and everything to protect his family. He didn't care about anything other than Cersei and his kids, and he was fine killing an innocent child to protect their secrets (though he did hesitate long enough for Cersei to shriek "he saw us" about 300 times). He didn't care about anyone outside of those close to him, further emphasized when he tells Cersei in season six, "F*ck everyone who isn't us."

But season eight Jaime is willing to leave his pregnant sister-lover (OK, possibly pregnant) and say "f*ck loyalty" to save humanity. He's lost his hand, all three of his children, and most of all, he just seems super tired of the bullsh*t. It's that version of Jaime we can't help but hope survives long enough to see his losses truly mean something.