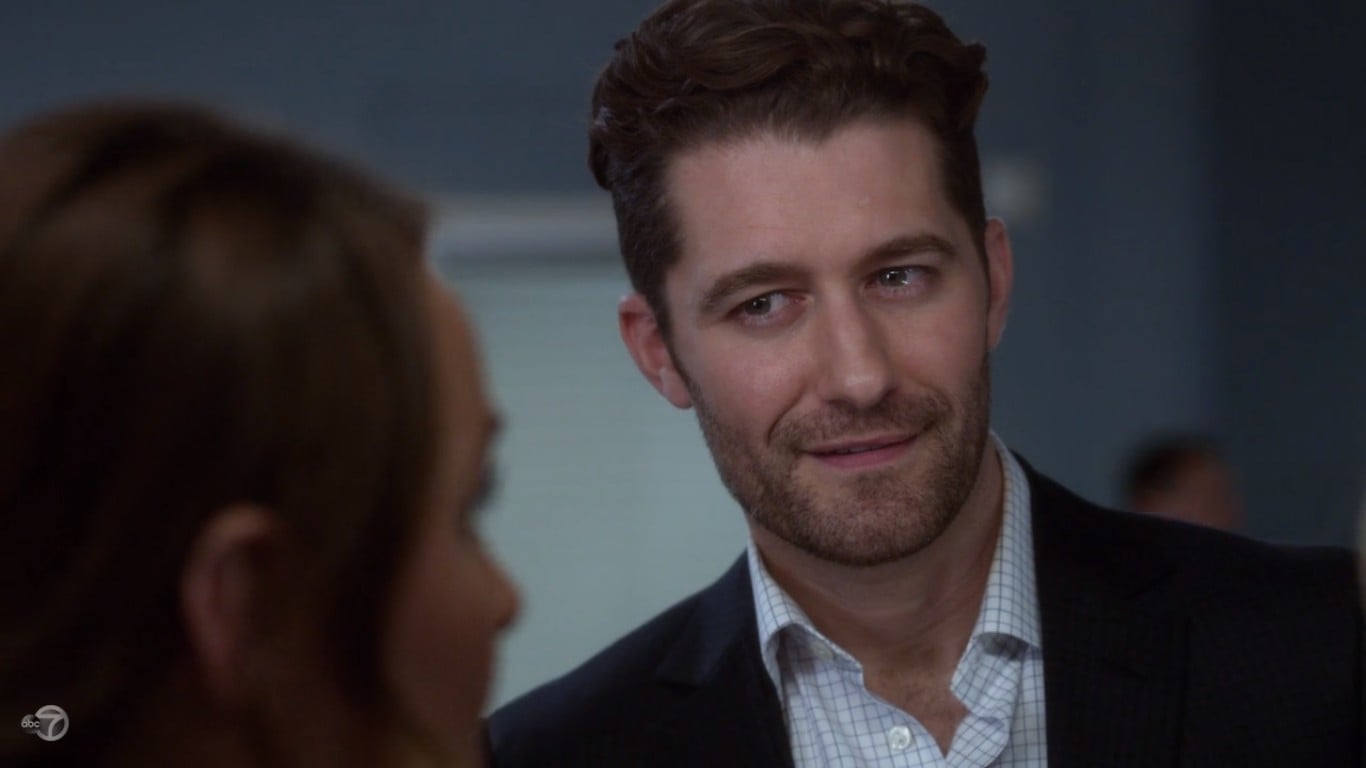 It's been a while — two months, if we're being specific — since Grey's Anatomy fans have seen a new episode. The cliffhanger from the show's Winter finale left a lot of us struggling to pick our jaws up off the ground after the return of Jo's abusive husband. And it's safe to say now that the Winter premiere — brilliantly titled "1-800-799-7233," the number for the National Domestic Violence Hotline — pretty much gave us the exact same reaction.

The last time we saw Jo, she had just run into her terrible, horrible, no-good, abusive husband, Dr. Paul Stadler (Matthew Morrison), who unexpectedly turns up at the hospital at the end of the show's midseason finale that aired back in November. Thursday night's premiere picks up right back where things left off, with Jo racing to find Alex before being unpleasantly surprised by Paul's return.

Related:
Grey's Anatomy Has a New Spinoff You Can Watch Right Now

The first few minutes of the episode show Jo speechlessly staring into her estranged husband's eyes as he wastes zero time introducing her to his new fiancée, Jenny (Bethany Joy Lenz) and revealing that he's having a hard time getting his wedding planning underway since he and Jo — Brooke, to him — are technically still married. So he's on a mission to get her to sign their divorce papers. It sounds like it's a pretty small thing, but it actually ends up being a little more complicated than that.

Because what makes things worse is that Paul is actually kind of a big deal, as we learned last season when Alex first came face to face with him at a medical conference in Los Angeles. Dr. Stadler is a world-renowned surgeon, and many of the doctors at Grey Sloan spend their first moments on screen shamelessly fangirling over him, obviously knowing nothing about his relationship with Jo (he only reveals that Jo studied under him at one point when she was a student). Paul's reputation among the doctors ends in Dr. Webber giving him surgical privileges for the day to help out around the hospital, which is still in a bit of a frenzy thanks to those pesky hackers and their demands.

Related:
Why Derek's Death on Grey's Anatomy Was "A Defining Moment" For Ellen Pompeo

He eventually ends up in the OR, assisting Meredith with her splenectomy after her intern, Glasses (or "Specs," as he would now prefer to be called), passes out from blood loss. Unlike the other doctors, Meredith is aware of his violent history with Jo, and she lets it be known as soon as Paul introduces himself to her. Again, wasting zero time, Paul takes every opportunity here to basically throw Jo under the bus and explain to Meredith that she was not only mentally unstable during their tine together, but she was also a huge party girl during the time that she was his student.

Meanwhile, Jo is up in the gallery, watching the entire scene between the two of them play out before she's alerted by another intern that she's to be brought back to Alex, who, after coming face to face with Paul right before rushing into surgery, carefully instructs her not to let Jo out of her sight.

Eventually, Jo and Paul are brought together again, only this time they're finally signing those divorce papers with Meredith as a witness. Paul makes a creepy attempt to stall the process a little and later makes his exit by giving Jo some well wishes — but Jo isn't buying his new act. She takes a quick moment to tell him off before hatching a plan with Meredith and Arizona to catch Jenny alone to warn her about her history with Paul, offering Jenny help in the event that she ends up being abused by him, too. But Jenny winds up telling Paul everything, leading to a confrontation between himself and "Brooke" that ends in him holding onto the contact information Jo gave to Jenny in case he ever wants to unexpectedly pop up on her again.

By the end of the hour, Paul is wheeled into the hospital on a stretcher before it's revealed that he's been the victim of a hit-and-run accident. But the jury's still out on whether this was an actual accident or not, because Jo and Alex are cryptically watching the scene nearby, leaving Meredith (and the rest of us) to wonder exactly what happened here and how this might possibly end for everyone involved.

If you or someone you know is experiencing domestic abuse, call 911 or the National Domestic Violence Hotline at 1(800) 799-SAFE (7233) or visit thehotline.org.

Saturday Night Live
SNL's "What Up With That" Skit Had Oscar Isaac as a Pirate and Cousin Greg — Need We Say More?
by Kelsie Gibson 17 hours ago