It's been so long since Game of Thrones was on the air that I honestly forgot what it was like to have the entire world pick apart each frame of footage piece by piece, unearthing potential clues that I wouldn't have been able to spot even if I had microscopes for eyes. (Technically, with the prescription in my glasses, I do.) Fortunately, when the first teaser for the eighth and final season of the HBO series dropped, diehard fans were ready and willing to dissect each second to see if any secrets were nestled in the walls of the Winterfell crypt. Lo and behold, a big hint about what's to come might have been hiding in plain sight all along.

As a reminder, the brief teaser sees Sansa and Arya Stark, and their sibling/cousin Jon Snow, marching through the crypts, passing statues of their late relatives, like Ned and Catelyn Stark. When they reach a far wall, though, the trio stumble upon something incredibly foreboding: statues modeled after their own faces, hinting that their deaths might not be far off. Then a threatening wave of frost creeps through the hall, as Jon and Arya draw their swords. Chills. (Literally.)

Related:
Game of Thrones: Why the Feather in the Season 8 Teaser Is So Important

But before the Night King (presumably) makes himself known by sending ice through the crypt, the camera takes its time zooming in on all the faces of the statues. Statue Sansa and statue Arya look pretty spot-on to the actors who play them (Sophie Turner and Maisie Williams), but statue Jon has given fans reasons to hope that he might end up being the one who sits on the Iron Throne. Despite theories that the feather in the teaser spells death for the Starks (especially Jon), Redditor nathanmcc1 pointed out that his statue appears to be the only one of the three that is carved to look older than the character/actor Kit Harington currently is, meaning that he has the best chance of surviving the White Walker onslaught.

Here, take a closer look at Sansa and Arya's statues:

They both look remarkably similar to the Stark sisters now, not how they might appear a decade or two later, right? But it's hard to deny that Jon Snow's statue looks a bit . . . weathered, to say the least:

Again, here's real Jon side-by-side with statue Jon. (I even lightened the photos a little bit to help you — I accept donations in the form of Game of Thrones wine.) 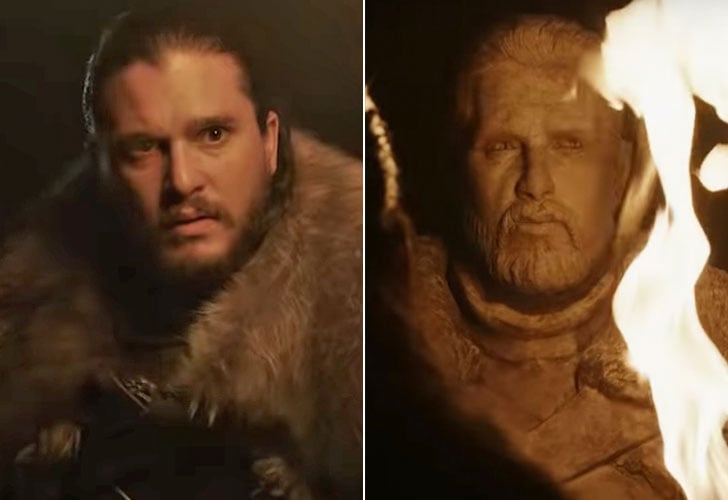 Related:
The New Game of Thrones Teaser Makes a Lot More Sense When You Consider This Theory

The statue appears to have lines in the forehead and around the eyes, which also look like they have puffy bags under them (aka a rude-but-inevitable effect of aging in a time when eye cream hasn't been invented yet). But is this merely a rough approximation of the character on the part of whoever sculpted the statue? Redditor Fried_Cthulhumari points out that real Jon is wearing the same clothes as his statue, suggesting that we're all reading way too much into this theory.

[SPOILERS] Photo compare of the statue in the teaser, should help settle the age confusion. from r/gameofthrones

Regardless of how we all feel about the statue, take solace in the fact that there's one person out there who loves it no matter how old it makes him look: Kit Harington himself.

Josh Gad
10 Points For Gaston! Here's What We Know About the Beauty and the Beast Prequel Series
by Grayson Gilcrease 1 hour ago

Netflix
What the F*ck Is Netflix's Sexy Beasts and Why Are We So Invested in It?
by Grayson Gilcrease 3 hours ago