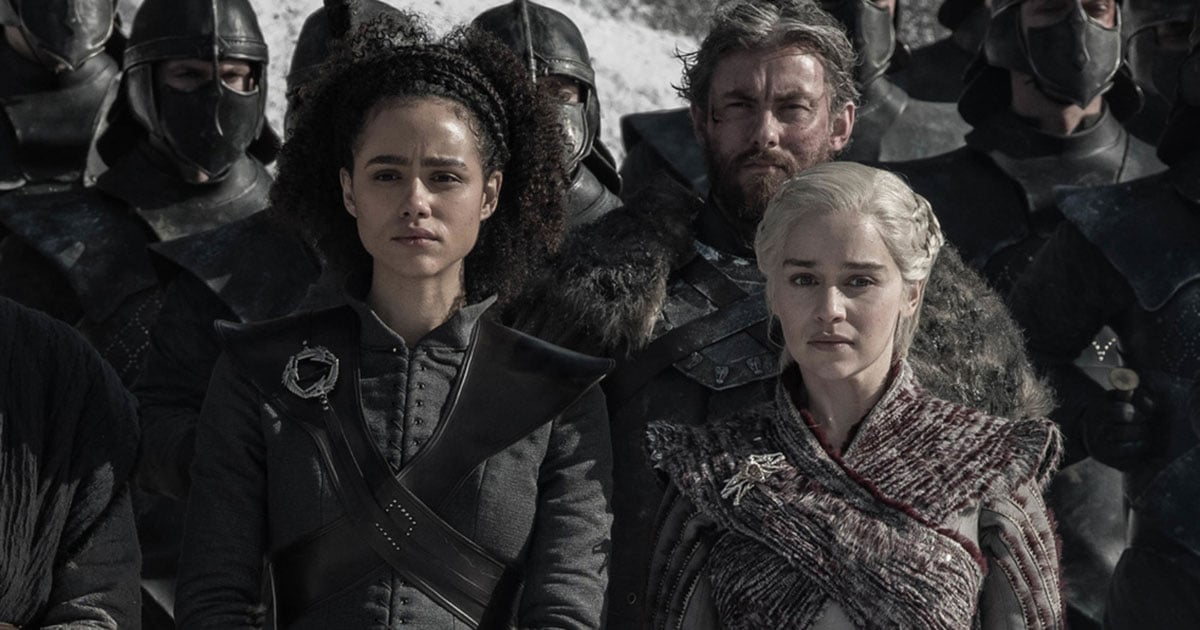 Warning: Giant Game of Thrones spoilers ahead, so proceed with caution.

If you thought the Battle of Winterfell was full of tragic deaths, then we can't imagine how you must be feeling after watching the most recent episode of Game of Thrones. In season eight's fourth entry, "The Last of the Starks," we witness Missandei's beheading, courtesy of Cersei and the Mountain, and Rhaegal's death by spear, courtesy of Euron. While we have love for Jorah, Theon, and everyone else who perished in episode three, we have to say that Missandei's exit is far more emotional for a few different reasons. It also had us looking back on her history with Daenerys, and just how far she's come since her debut in season three.

As a reminder, Missandei, played by Nathalie Emmanuel, first appears in the season three episode "Valar Dohaeris," which sees Dany sailing into the city of Astapor in Slaver's Bay. She's soon given a tour of the Unsullied barracks by the army's owner, Kraznys mo Nakloz, who brings along his slave girl (Missandei) so she can translate his Low Valyrian for Daenerys. Enslaved at a young age and taken to Slaver's Bay in Essos, Missandei grew up learning how to speak 19 languages, including both High and Low Valyrian, Dothraki, the Common Tongue of Westeros, and even a handful of dead languages.

After Dany makes an offer to the Good Masters on the Unsullied in exchange for one of her dragons, she tells Kraznys that she wants Missandei, too, as a show of good faith for their transaction. Once they're alone, the dragon queen asks Missandei if she has any family ("No, your grace") and warns her that they'll be heading into war and she may one day be killed. Missandei simply says, "Valar morghulis."

Dany replies by correctly translating the phrase, and adding a bit of her own opinion onto the end: "Yes, all men must die. But we are not men." The moment instantly curries Missandei's favor. And now, looking back on it, we can't help but notice how significant Dany's warning would one day be, even if she did say that she and Missandei would make it out alive.

From that moment on Missandei acts as Dany's right-hand woman (even if she doesn't have the title of hand to the queen) and is loyal to her in all ways. It's during her time at Dany's side that she also meets and falls in love with Unsullied soldier Grey Worm, resulting in one of the show's few legitimately loving, healthy relationships. To put it lightly, we'll miss her, and we can't help but feel that Missandei deserved better.