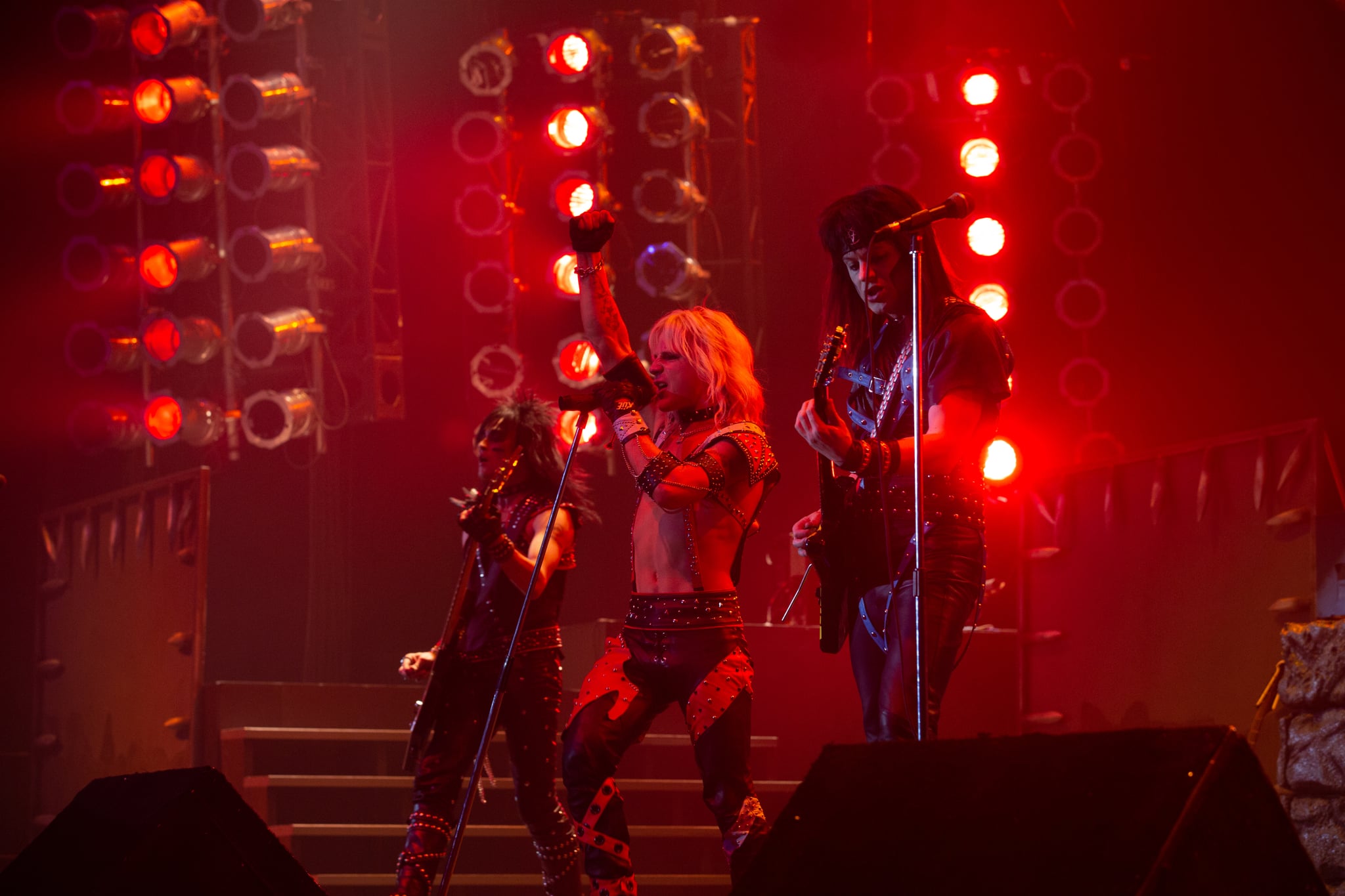 Netflix's new biopic The Dirt is all about Mötley Crüe's music — well, that and the band's infamous hard-partying lifestyle and various love affairs. The four young actors who play the famous rock band had some pretty big boots to fill, both in terms of personality and musical abilities, but they rose to the challenge.

Director Jeff Tremaine told Thrillist how the cast worked overtime to fast-track their musical abilities, with the help of some on-set coaches and teachers, as well as preparing before the shoot.

"Daniel [Webber] had a vocal coach, Douglas [Booth] had a bass coach, and Iwan [Rheon] had a guitar guy who would come over and sit with him . . . It was a month and a half of really intense training everyday — not just learning the instruments, but working with a choreographer on moving like the guys."

Out of all the actors, though, it was Machine Gun Kelly, playing drummer Tommy Lee, who had the toughest road of all. Because of the real-life Lee's penchant for theatrics and performance, the actor playing him couldn't be phoning it in — he had to master all the tricks for real, said Tremaine.

"He's the one that really couldn't fake it. He's got to actually be able to play, so he truly dove in and learned those songs . . . Colson [Machine Gun Kelly's real name is Colson Baker] went through some rigorous drumming training before we even started, so he didn't come starting at zero. The day I gave him the gig, I told him, 'You need to have a drumstick in your hand and just learn how to twirl that through your fingers every second.' He took it very seriously. By the time he came out to the boot camp, he already knew how to play a lot of the Mötley songs that we were going to do."

Baker himself admitted to USA Today that the process of learning Lee's signature drumming style wasn't easy — it even left him with some battle scars!

"I had that damn drumstick in my hand for four months straight, dude," he said. "I have giant calluses in between my middle finger and my index finger just spinning that damn stick. So I hope you enjoy the stick twirls in that movie."

Even though the actors did learn how to play their instruments and sing the band's music, the final cut of the movie isn't entirely voiced by the actors. Tremaine explained in his Thrillist interview how the final version of the soundtrack involves the cast, as well as the original band.

"[The cast] could play it, [but] I'm not going to say that what you're hearing is them exactly playing it. We recorded them. We also got all the actual Mötley recordings. Some of it is rerecords with other bands and some of it is actually Mötley Crüe that they're just performing over it. So it's a blend." Although it might be disappointing to not hear the actors' own takes on the classic music, it's pretty great that we get to hear their takes combined with the originals for a new but familiar sound.

Netflix
Murder by the Coast: Who Killed Rocío Wanninkhof? Here's How the Case Unfolded
by Stacey Nguyen 17 hours ago

Netflix
Netflix Bids Grand Army Goodbye After Just 1 Season, and We're Not Sure How to Feel
by Grayson Gilcrease 3 days ago