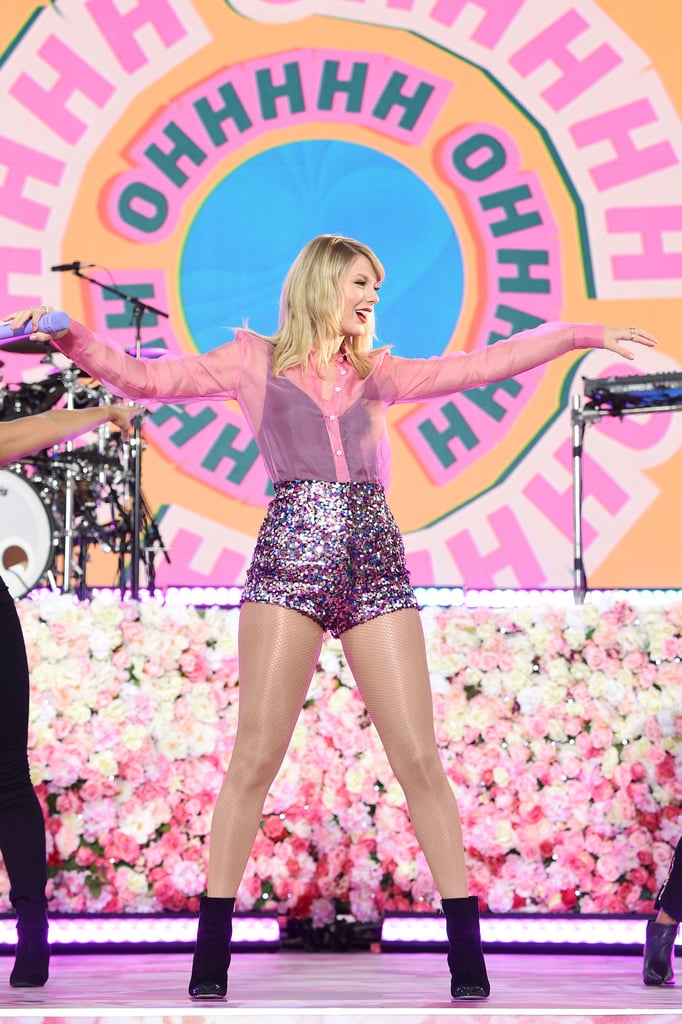 Taylor Swift took over Good Morning America on Thursday, and it looked like a huge party. Ahead of the release of her seventh album, Lover, the singer performed some of her biggest hits, including "Shake It Off," "ME," and "You Need to Calm Down," in Central Park for hundreds of dedicated Swifties. A few of the fans actually started lining up the night before, and Swift made sure to supply them with pizza and water, courtesy of her team and father, Scott Swift. Wearing sparkly shorts and a sheer button-up shirt, Swift made sure to include a few more Easter eggs about her upcoming music as she strutted her stuff on a stage decorated with cornelia flowers.

During her appearance on the show, Swift also made a big announcement about her upcoming music. The "ME!" singer confirmed that she plans to rerecord her first five albums in an attempt to own the masters to her original music. "Yeah that's true, and it's something I'm very excited about," she told Robin Roberts. "My contract says starting from November 2020, I can start rerecording albums one through five. I think artists deserve to own their own work. It's next year — I'm gonna be busy." See more videos of her GMA performances ahead.

Related:
Taylor Swift Is Doing Better Than She Ever Was in 2019, and I'm Here For It
0
previous images
-22
more images
Previous Next Start Slideshow
Taylor SwiftMusicGood Morning America
Around The Web