"But this is not you," my friend told me, staring in confusion. He added, "This is not who you are," shaking his head. This was his initial response to learning that I had undergone plastic surgery on my body — liposuction and a BBL (Brazilian butt lift). "It's just you're more of a Lauryn Hill type of chick . . . not a Lil' Kim." Up until this moment, I'd tried to make sense of my recovery process. The lack of empathy and weird responses I received from some people, paired with the emotional drainage I was not ready for, were just some of the evident cons of that experience. Pero at that moment, it hit me: people, men in particular, have always had a hard time categorizing me. Women who get BBLs are often categorized as "chapiadoras," women who seek the attention of men in order to rise in class. We are perceived as "materialistic," non-body-positive, "lazy," and women who willingly objectify ourselves in order to please the male gaze. These are the types of labels women who decide to go through this procedure are often given. These are also labels people wouldn't associate with me, because of many other characteristics of my identity as a historian: intellectual, professional, and empowered woman.

As I stared at my good friend, I answered, "Why can't I be both? Why can't I be more?" Hill and Lil' Kim are both empowered women. Hill marked generations with "The Miseducation of Lauryn Hill," with themes of love, nostalgia, and social awareness. Not to mention, she was a major influence on the natural-hair movement. Lil' Kim inspired many raperas with her raunchy "Hard Core" debut, where she delivered sexual tones and lyrics rooted in pleasure. Both artists made men tremble. They both exist in me. Why must I choose, and why do others feel entitled to choose for me? Furthermore, there's much more to me that gets erased when I'm categorized in such a polarized manner.

This made me think about the Madonna-whore complex, a concept coined by Sigmund Freud, which breaks down how men tend to identify women as the "Madonna" — pure, wholesome, valuable, virginal; in other words, la mujer "descente" — or the whore — sexually expressive, indecent, aka "la puta." This was first introduced to me through a women's studies course in college, and it was then that my mind began to unpack the ways this served as the underlying theme of my Catholic, traditional-Dominican upbringing. This is the santa-puta complex.

The santa-puta concept is also the backbone of patriarchal thinking that birthed the flood of judgments and stereotypes revolving around womanhood and sexuality. It's a form of thinking that pushes men and society into deciding who is of value, who is to be treated as human, and who is worthless. Sadly, many women have internalized this and have since passed it down through tradition. For Black and brown Caribeñas, this is hit with stronger bricks. From childhood, we aren't seen as girls. Instead, we're seen as little women. We aren't given the grace or softness that white girls are honored with. Instead, we are often oversexualized by the time we hit our preteen years, from the way we dress to the way we speak or dance. As a result, there's immense pressure to be a well-respected woman, una mujer descente. In order to be "respected," we must limit our existence in many ways: our fashion expression, sexual expression, and bodily autonomy.

"In terms of Caribbean women specifically, our bodies were literally territories of conquest to be exploited. Control of our sexual expression was and is essential to political order and domination," shares sex educator and historian Mónica Figueroa Marrero, who, alongside writer Leuryck Valentín, hosts the "Vulgar Maravilla" podcast and archival platform. Referencing Rosamond S. King's "Island Bodies: Transgressive Sexualities in the Caribbean," Marrero explains the ways the legacy of Christianism and slavery play in disciplining the Caribbean land and body for exploitation. King compares Caribbean girls' and women's sexuality to "forced ripe fruit," as well as the cult of true womanhood dragging on 19th-century white women's ideals of piety, purity, submissiveness, and domesticity. "Women's sexuality is tied to class and respect," Marrero says. "So this idea of suffering to be worthy like in Christianity, to justify and have us be tolerant of men's cheating and promiscuity and tolerant of the government's oppression."

"Vulgar Maravilla" makes it a point to unpack our experiences as Caribeñas in Caribbean "vulgar" Spanish. "That is also part of the liberation and breaking away from respectability. Even in sex-positive spaces, it's so full of respectability y mierdas. We are able to name and put words to processes related to sexual liberation in a digestible, colloquial way that's ours . . . and we bring in joy and laughter a lot, too," Marrero says. Their mission is to let go of shame in sex, love, and relationships, because as they point out, pleasure is our birthright. They do this through the storytelling of Caribbean womanhood, the lived experiences, and the sexual-liberation journey. "Mi bellaquera no anula mi capacidad en el trabajo," Leuryck states in their latest, loosely translating to "My sexual mischief does not nullify my ability at work." The statement and reassurance hit home.

As a woman working in a hypermale industry, where respect is tied to my presence and sexual expression, playing into respectability politics has always been survival. Afro-Caribeñas often play the game to make it in media and music. For many of us, this means code-switching, adapting to a more acceptable Spanish, and avoiding hypersexual expression at all costs.

As a woman working in a hypermale industry, where respect is tied to my presence and sexual expression, playing into respectability politics has always been survival. Afro-Caribeñas often play the game to make it in media and music. For many of us, this means code-switching, adapting to a more acceptable Spanish, and avoiding hypersexual expression at all costs. Growing up, I never really cared about entertaining the male gaze. Male attention has always made me feel uncomfortable. As a survivor, this was a trauma response that affected the way I socialized with men and my personal fashion style. The oversize jersey or tee has become synonymous with my identity, and though I love sportswear and the iconic hip-hop staples of the '90s, sported by women I admire like Angie Martinez, I faced my relationship with clothing in my late 20s. 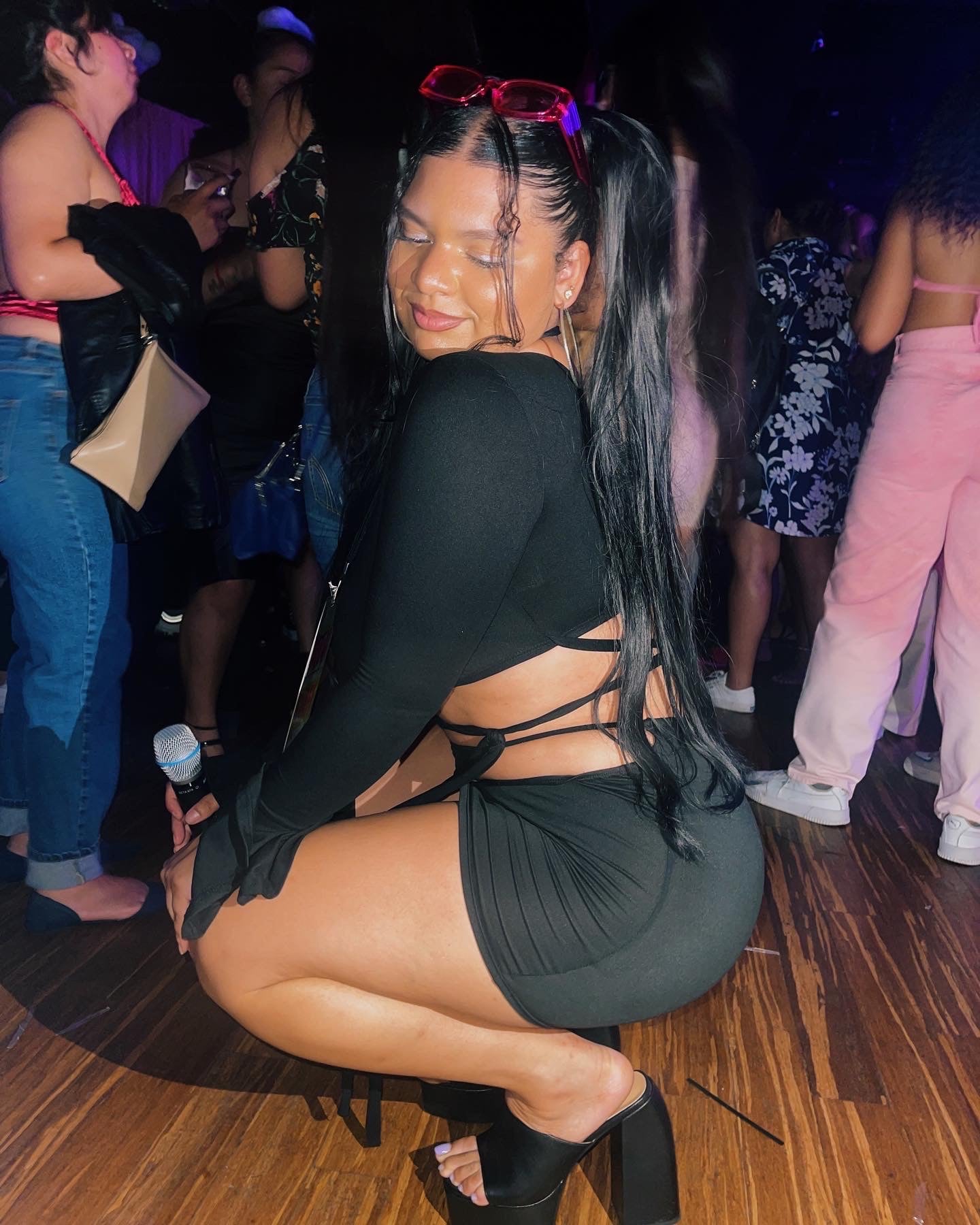 The reality was that at times, it was a safe choice. I also faced my relationship with my body and sexuality. I began to think of all the women I admired from the '90s like Mary J Blige and Ivy Queen. Like me, they navigated life with both feminine and masculine energy. Their evolution throughout womanhood and their bodies is a testament that we are ever evolving. For example, Ivy Queen's fashion sense in her The Noise era came with oversize pieces compared to her "Yo Quiero Bailar" era — a Y2K moment filled with heels and fitted attire. Their versions of womanhood fluctuated and aligned with who they were at any particular time.

Today, people are often caught off guard by Tokischa for her way of performing sex-positive music while also embracing baggy clothing and a tranquil presence off stage. As if to say, "What do you mean you are not sexually expressive all the time?" This same confusion is met when they witness women like Red6xteen, who opt for buzz cuts, androgynous looks, and aggressive tones in drill and trap while simultaneously creating melodic, soft, sensual R&B-inspired tracks.

"Sexual expression is ever changing and infinite like the universe. We are obsessed with the binary not only when it comes to gender but in many ways like having to choose between la santa or la puta."

"Sexual expression is ever changing and infinite like the universe. We are obsessed with the binary not only when it comes to gender but in many ways like having to choose between la santa or la puta. We ask women to dissect themselves, be one thing y pa joder be stagnant like musty sewer water that has nowhere to go or flow," Marrero says, mentioning Gailen La Moyeta, Villano Antillano, La Perversa, and Ana Camacho among other women who are threats to this polarization and binary. 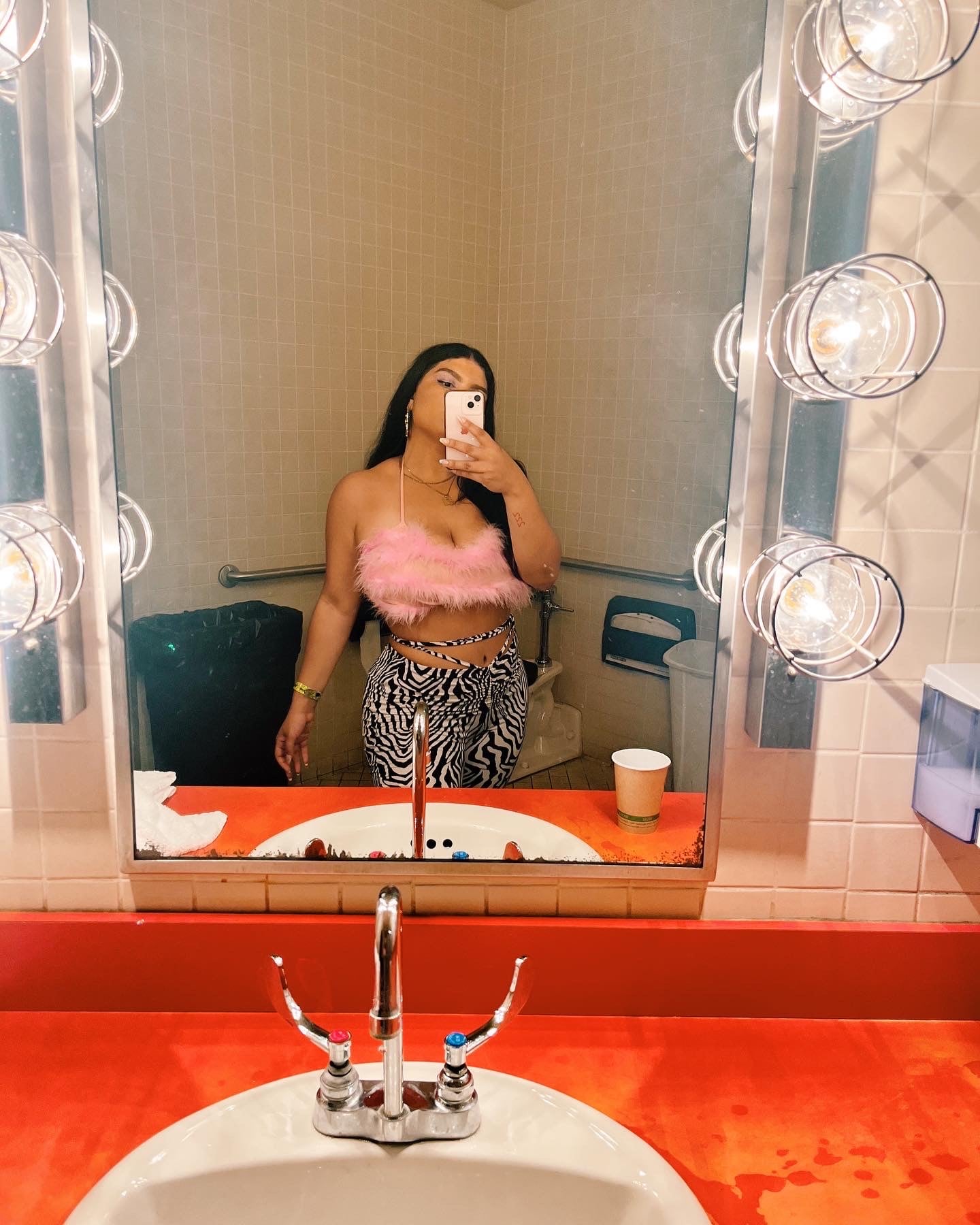 "Jenny, I know that when you make a decision, it's for you and no one else," was my dad's initial response to my desire for surgery. "If this is going to make you happy, I will support you." My decision to go forward with the surgery stunned people, because I've always — and still do — advocate for self-love, body positivity, and appreciation of everything natural.

Why contour my body with the help of plastic surgery? For whom? My reasons are mine and mine only: it's my bodily autonomy. I will be a threat to society regardless. By creating an even curvier presence and wearing tighter pieces more often, I am choosing expression. This ownership alone is a threat. I am Lauryn, I am Kim, I am Ivy, and I am Red. I'm an oversize-tee type of chick and a mini-falda type of chick. All of these women are in me, and to improve our existence as a culture, we need to normalize the multidimensional and decolonize the way we view expression, sexuality, and shame. Pleasure is our birthright. Ownership of our bodies is our birthright. How we choose to express that is our birthright, too.