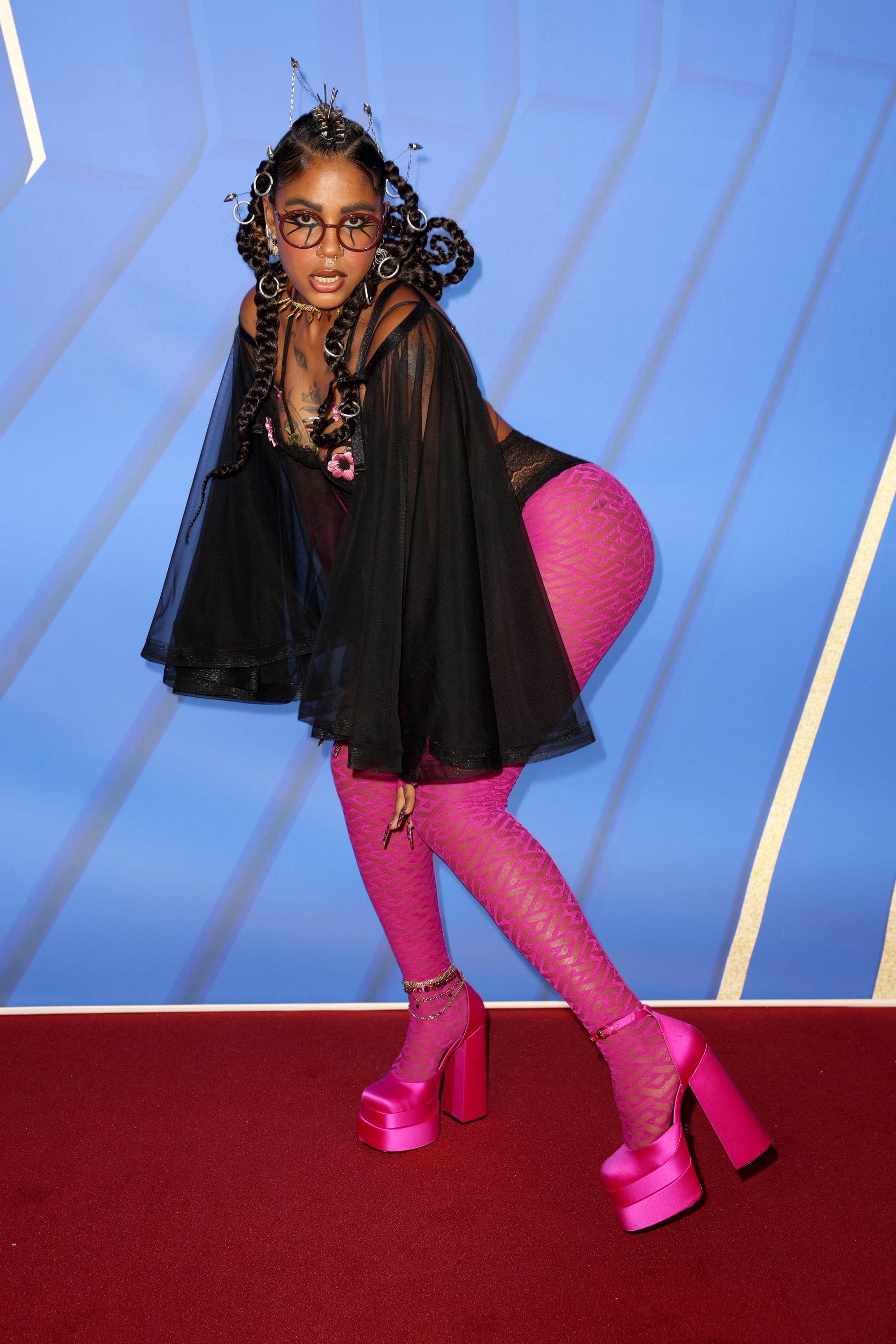 Tokischa is dembow's renaissance woman. In a short amount of time, her message of liberation has left a mark on the music industry. While she has always been an artist, Tokischa fell in love with music while doing a photoshoot for a magazine, where she met producer Raymi Paulus. Palaus asked her to step into the studio, and Tokischa recorded her first song. "Since I [could remember], I wanted to do art. Dancing, acting, writing, drawing, fashion — everything related to art. I was always learning and always seeking that world," Tokischa tells POPSUGAR.

In a short span of time, Tokischa has positioned herself as a musical force to be reckoned with. She prides herself on speaking on the trials and tribulations of being from the hood of the Dominican Republic. "I talk explicitly [about] what's going on in the bajo mundo. I'm not here to represent the high class or represent the people from the mountains; I'm here to represent the hood. That's what I've seen and what inspired me, to be honest," she says.

Her unique sense of fashion sets her apart from other artists and forms part of Tokischa's freedom of expression, which she attributes to her mom. According to the rapper, she developed her sense of fashion by flipping through the images in Vogue magazines that her mom would send her from the United States because they were hard to come by where she grew up. "Where I come from, there's no way you're going to get Vogue magazine unless somebody from another country sent it to you," Tokischa says. "She always kept showing me high fashion, and I was always wearing crazy clothing that she would get me."

For Tokischa, fashion is an art, and as an artist, she feels it's important to use these different avenues to express herself. She has used her visuals to not only showcase her fashion style but also to push her overall creativity to new heights. "Even the way you look at people is an art. Music, pictures, videos even, the hair and nails, it's an art. So anything I can grab and make a piece of art, I will," she adds.

Tokischa is known for exuding a level of confidence and fearlessness, especially when it comes to her sexuality. It's that fearlessness that has helped her become a pillar in the LGBTQ+ community. "My entire life, I've been excluded," she shares openly. "I was always looked at as irregular or not normal, and it was like, where do I belong? I was always the black sheep, and it's a community of power, of love and acceptance, so that's why I identify with it."

The rapper, who identifies as sexually fluid, is unapologetically herself. It shows in her lyrical content, which has both served as a form of resistance and deemed her controversial. In Dominican culture and Latinx culture more broadly, Tokischa is known as a woman who dances to the beat of her own drum and very publicly owns her sexuality. Her tongue-in-cheek song "Perra" with J Balvin was meant to be taken audaciously as a woman-empowering anthem, boasting lyrics like "Yo soy una perra en calor/ 'Toy buscando un perro pa' quedarno' pega'o," a play on words of being a female dog in heat. The song was meant as a "satirical representation" of the "many contexts of the word 'perra,'" as well as a form of sexual liberation, according to Paulus. But instead, she found herself in hot water for scenes that include Balvin walking two Black women on leashes. Still, Tokischa stands by being sex positive in her music.

"I'm very sexual — that's my nature as a human being, as an animal — and I'm not afraid to express how I feel about that."

"I'm very sexual — that's my nature as a human being, as an animal — and I'm not afraid to express how I feel about that," she says. Sexually forward songs exist in every musical genre you can think of, from reggaeton and hip-hop to dembow and R&B and even pop. Yet men aren't questioned for their sexually explicit songs and lyrics. However, women, specifically Black and Latina women, have been constantly ostracized for it. It's something that Tokischa is proud to embrace in her music with the hope that it will inspire others to live authentically.

"That's really why we do anything in life, to inspire people. It's important to send a message of freedom," the dembow artist says. "Most people are trapped. If you can give the people a little freedom, even if it's tiny, it's a blessing." In the past, it was difficult for women to break through in genres like dembow and reggaeton. But artists such as Tokischa who bring forth messages of freedom and empowerment to the table have helped make waves that can be seen more often in the dembow scene. What was once considered a men-dominated genre isn't the reality so much anymore, according to Tokischa.

"I think that idea of a male-dominated industry is in the past. There are a lot of women that are making it big right now, and that's amazing."

"Right now when you look around, there's a lot of women breaking records and making it happen," she says. "I think that idea of a male-dominated industry is in the past. There are a lot of women that are making it big right now, and that's amazing." Tokischa recently finished a European tour and has begun touring across the United States with her Popola Tour, promoting singles with artists including Rosalía, Ozuna, and Eladio Carrión. Traveling has been an adjustment for Tokischa, but being on stage representing her hood and her culture while performing in different countries makes her feel right at home.

Tokischa's latest single, "Delincuente" — a sexually charged song featuring reggaeton superstars Anuel AA and Ñengo Flow — has stirred a lot of buzz. There were over 40,000 videos created by fans on TikTok in less than 24 hours since the song dropped, racking in millions of views on YouTube in just a few days. The song showcases Tokischa's unique ability to creatively push the boundaries in her music through a combination of sexy visuals and lyrical content, something that comes naturally to the Dominican artist. "I've been like that my entire life. Whatever I want to do, I do it," she says. "Whatever comes to my mind, and if I want to make it happen, I make it happen, because that's just my essence."

Her debut album is currently in the works and something she can't wait to put out. Tokischa, of course, plans on making it the ultimate form of resistance. She already has an album name picked out but wants to make sure that it accurately represents and embodies everything that she is: an artist, a creative, a girl from the hood. A renaissance woman.