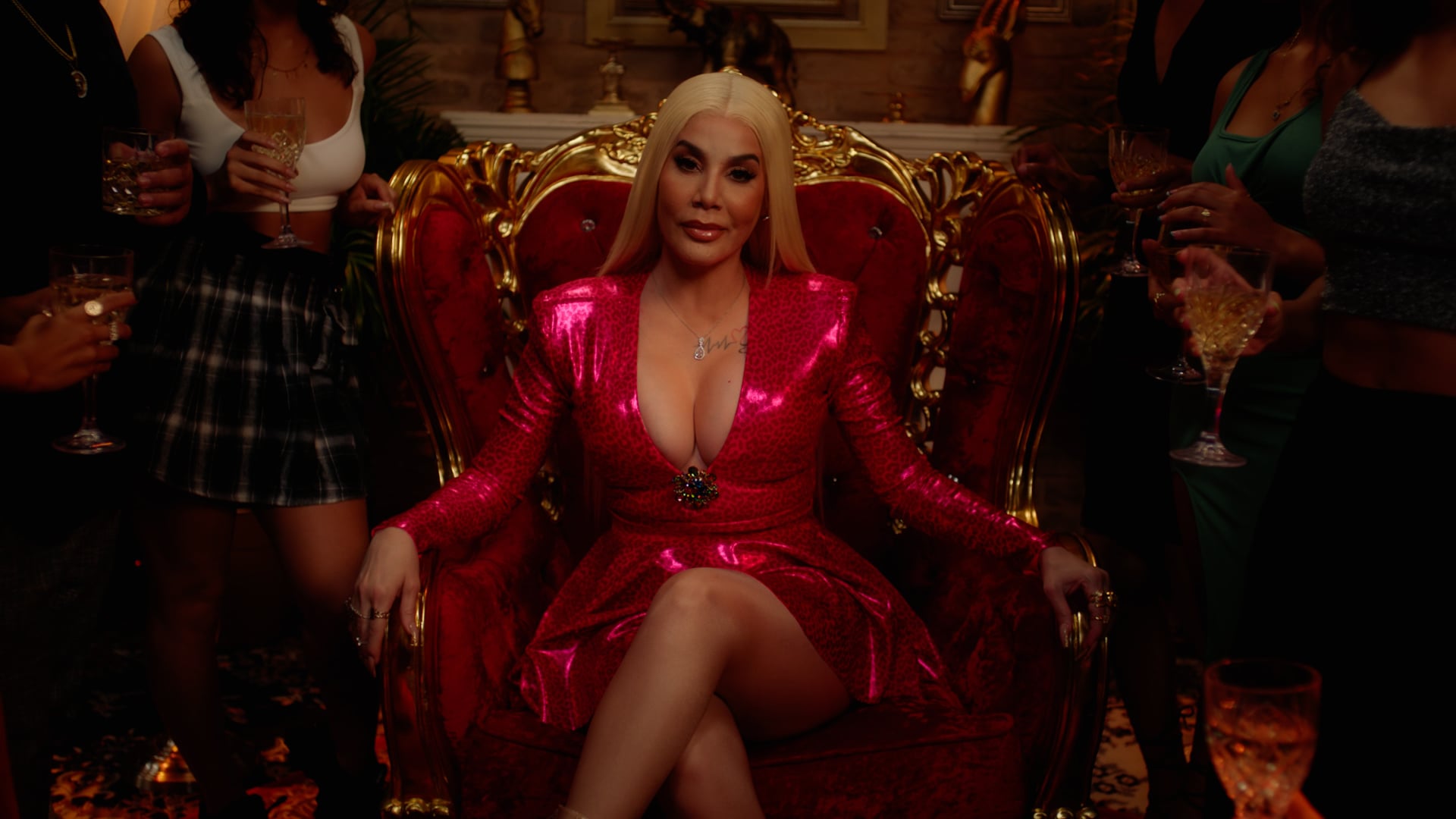 There are a lot of myths, misconceptions, and a serious lack of acknowledgments that exist in today's era of reggaeton. If you were listening to the genre back in the '90s before it went commercial, you'd know that reggaeton began in the '80s as an Afro-diasporic movement in Panama, but the originators are rarely given credit. But Spotify and Futuro Studios' latest podcast, Loud, is revealing the true history of the genre that has currently taken over the music industry. Reggaetonera originator and host of the podcast Ivy Queen narrates and breaks down how it all began from its origins in Panama to the racial and sociopolitical struggles it came with, how it made its way to NYC and then Puerto Rico, to how it became the commercialized entity that now rules the music world.

"For some people, reggaeton is just party music, but the real story behind reggaeton is a story about la resistencia. Resistance," Ivy Queen says in Loud's episode one. "About how kids who were young or poor, Black or dark skin — kids who were discriminated against in every way — how we refused to be quiet. How we got loud."

In episode one, titled "The Zone," Ivy Queen shares the history of how reggaeton started in Panama with three Afro-Panamanian friends, who were all descendants of West Indian Panama canal workers. The three friends were the first to translate Jamaican dancehall and reggae songs into Spanish and made it a thing. They eventually started performing the translated songs at Soundsystem parties and even started making mixtapes that were sold as cassettes to commuters on the party buses in Panama, known as Diablos Rojos. It was called reggae en Español back then, and one of those friends eventually became reggaetonero El General. He brought the music to Brooklyn, which eventually made its way to Puerto Rico, where it evolved and became Puerto Rican underground, influenced by reggae en Español, NYC hip-hop, and the popularized "Dem Bow" beat. In Loud, we learn that Afro-Panamanian music artist Nando Boom is the genius who popularized the "Dem Bow" beat with his song "Ellos Benia (Dem Bow)," a cover of Jamaican dancehall musician Shabba Rank's "Dem Bow." It's the recognizable sound we associate reggaeton with today.

But like many things in popular culture that originated with Black creators, the originators are rarely given the acknowledgments they deserve. Most folks today believe that reggaeton started in Puerto Rico with artists like Daddy Yankee. And while he did play an important role in the movement, Loud dedicates the first two episodes to where the story really all began, making sure to credit every single originator. Not only is credit given where credit is due, but the podcast also goes into the history of how reggae en Español, which later evolved into Puerto Rican underground, and eventually became what we now recognize as reggaeton today, was music that was initially not accepted. Because it began with Black kids in Panama, who were descendants of West Indians, it was a genre that experienced struggle and discrimination from the beginning. It was a genre created to celebrate Black Latinx pride and carve out a different path for underprivileged kids. It wasn't just music for partying. It was political. It was music that allowed Latinx communities who were normally marginalized and discriminated against to be seen and to express themselves around certain topics like racism, crime, police brutality, drugs, and sex. And while artists like Bad Bunny and J Balvin have played an important role in reggaeton being as mainstream as it is today, Loud wants folks to understand how it all began. Like Ivy Queen mentions in "The Zone," it's a story that touches on race.

Ivy, who is an originator herself, is honored to be hosting Loud, because it's a history she knows quite well. She felt it was especially important to start the show highlighting the genre's Afro-Panamanian diasporic roots, which are often ignored. She wants people to understand that the roots of reggaeton all began with struggle.

"This was music for kids who were struggling to survive and find that relief through music, so it's important for us as Latinos to come together and share this now that our music is mainstream. So the world can know and share it for generations to come."

"From scratch, it was a struggle for Panamanians, then for Puerto Ricans, and for Colombians. It's always been a struggle esta musica that belongs to the barrio — to the streets and to the humble people," Ivy told POPSUGAR. "This was music for kids who were struggling to survive and find that relief through music, so it's important for us as Latinos to come together and share this now that our music is mainstream. So the world can know and share it for generations to come. It's very important that right at this moment, our music is number one."

When we think of reggaeton, we don't necessarily think of racism or systemic segregation, but in Panama in the '80s, that's what a lot of Afro-Panamanians of West Indian descent were experiencing. In Loud, Ivy talks about the migration of over 100,000 West Indian immigrants who were brought to Panama in 1904 to work on the Panama Canal. Generations later, the descendants of those workers were facing all kinds of discrimination, including police brutality, just for being Black people with English-speaking roots. Even wearing your hair in a natural Afro or in dreadlocks was considered an act of resistance.

In episode two, titled "The Nueva York Connection," and episode three, titled "The Noise," we learn how reggae en Español evolved in Puerto Rico in the early '90s to become what was known then as El Underground. We learn about how El General brought the music from Panama to Brooklyn in the mid-'80s and how the NYC hip-hop scene created by Black Americans and Puerto Ricans living alongside each other in NYC eventually made its way to the island of Puerto Rico. Mixtapes started to travel back and forth between NYC and Puerto Rico thanks to legendary rapper Vico C. A tiny nightclub in Viejo San Juan, Puerto Rico, called The Noise created by Afro-Puerto Rican disc jockey DJ Negro became the place where the underground movement was birthed. It's also the same place where Ivy and many others get their big breaks in the early '90s. It was the spot where brown and Black kids from the hoods in PR were able to see a way out.

Ivy has felt so inspired and connected to this project that she admitted to having to walk out of the studio several times in the middle of recording because she felt so many emotions narrating the story. She believes it's crucial that folks — Latinx communities especially — learn, recognize, understand, and share the true history of reggaeton.

"We have Bad Bunny, and we have J Balvin. We have amazing artists that con el paso del tiempo, the music has stayed alive, and that is so special," she said. "I am hoping and praying that we will never forget the essence and the flavor that birthed this music, which is one of my concerns and my message to the world."

Ivy says that the lack of credit and acknowledgments of the originators of the genre is a result of constant myths and misinformation. She hopes that Loud can finally set the record straight and work to bring the community together in the best way. In episode four, "Underground and the Underworld," we learn about the wave of drug-related violence that was happening in the early '90s in Puerto Rico. Ivy talks about how the launch of the "Mano Dura" policy targeted brown and Black kids living in the housing projects. In this episode, we also learn about how Daddy Yankee made his break and how his contributions and rapping style further evolved the genre.

"I think that tanto Daddy Yankee como yo, emos sidos like a fuente de inspiracion to the next generation and the next generation, and I'm so happy with Bad Bunny representing our island and bringing the spice and the same with J Balvin," she said. "People fall in love with reggaeton because of the sound. The sound goes through your ears and makes your body move. That recipe catches your whole body — your whole attention. That's something about reggaeton that's never going to change . . . it has been a great story of success and rebellion, resistance, and lucha. Like who would have thought our music would become number one?"

With the mainstream explosion of reggaeton, many have observed how the genre appears much whiter today. We don't necessarily see as many Black Latinx reggaetoneros, but Ivy has faith that it's coming. In fact, she believes it's crucial to the genre's survival.

"The Black representation is going to be there — it has to. I'm still seeing Zion y Lennox, and I feel proud. They are from another wave of our genre, and they are still surviving. I am hoping to see the comeback of Tego [Calderón] while I'm alive because he was one of the main propulsors de la negrua, de la sabor del negro. He brought a different flavor to the table."

"The Black representation is going to be there — it has to. I'm still seeing Zion y Lennox, and I feel proud. They are from another wave of our genre, and they are still surviving. I am hoping to see the comeback of Tego [Calderón] while I'm alive because he was one of the main propulsors de la negrua, de la sabor del negro. He brought a different flavor to the table," she said. "We've seen Sech from Panama. It's there. It's just that we need to push harder, and we need to bring powerful songs [to the forefront]. We need to continue to be innovative. But it's there, and it's coming."

Speaking of innovation, Ivy currently narrates Loud in Spanglish. She naturally goes back and forth in both English and Spanish throughout, and because that's how she always talks, it feels incredibly authentic. If you grew up speaking Spanglish at home, listening to Ivy will remind you of home. While most Spanglish attempts in media tend to feel forced, this feels everything but that. But she has high hopes for the podcast to eventually be narrated completely in Spanish so Spanish-speaking Latinxs can also learn this important history.

"I'm hoping that we get to tell the story in Spanish because it deserves that respect. It deserves that respect to the culture. To our Latino culture so they can listen to the podcast in Spanish," she said. "I've been reading a lot of DMs and reading a lot of comments, and that's what I get. I always love to get feedback from the fans and from the people who are listening to us, and I'm hoping that we get the honor to do it in Spanish."

Identity
2022 Has Been a Dangerous Year For the LGBTQ+ Community. Here's How We Can All Help.
by Nayanika Guha 16 hours ago