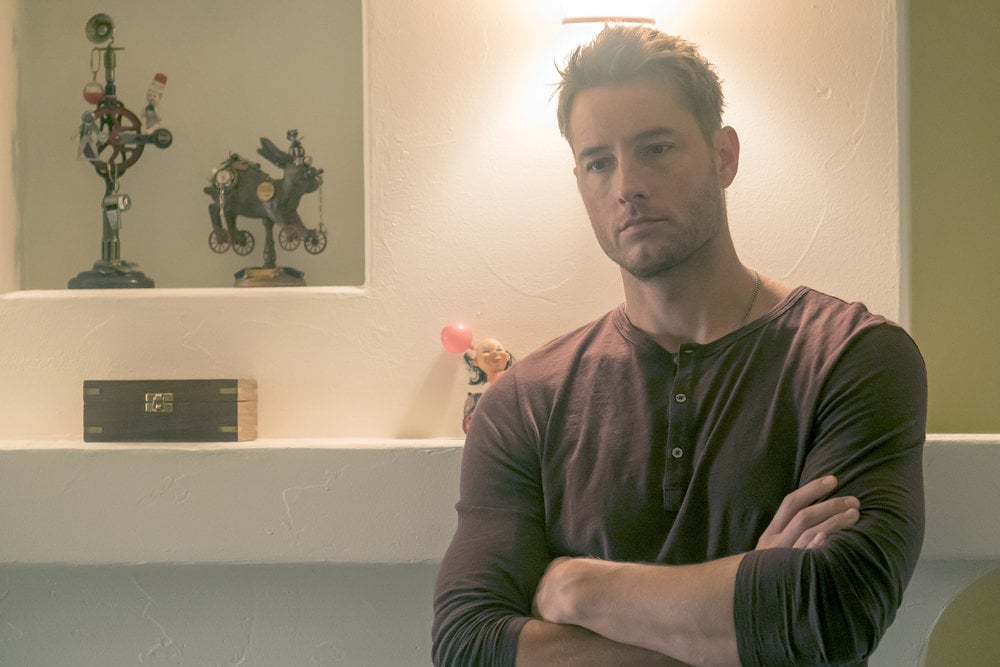 Kevin's road to finding his perfect match hasn't been smooth on This Is Us, but his Uncle Nicky's bad timing could finally give the oldest member of the Big Three his happily ever after. Yes, we're talking about Cassidy, because Cassidy and Kevin are definitely getting together. Come on, Nicky didn't throw that chair through a window for nothing, that's fate at work. And Reddit seems to agree.

Reddit user worldsbestboss writes, "I definitely think she will be Kevin's new wife. They'll meet when he goes to PA to bail Uncle Nicky out. There's so many layers here . . . they can share the trauma of him losing his dad and her going to war. They can stay sober (hopefully) together. Yep I see it happening." We see it happening too, and with Kevin's decision to skip the movie role in Chicago to help his uncle instead, the wheels already seem to be in motion for a Cassidy and Kevin romance — but we think it's going to be a long road for these two.

After all, Cassidy is still married, as far as we know, and no one wants Kevin to contribute to her marriage not working out. These two need a clean start to their relationship, especially since they've both been through so much. Instead, this season needs to be about them growing together as newly sober people. That's where Nicky comes in.

One thing that Reddit seems to agree on is that Cassidy is going to play a significant role in getting Nicky to be the sober, calm man who sits by Rebecca's bedside in the future. As a vet herself, she understands the trauma that brought Jack's younger brother to such a dark place. Likewise, he knows firsthand how easy it is for war to rob a person of their future, which puts him in a mentor position for the young veteran. Some sort of relationship between Nicky and Cassidy is inevitable given the whole chair throwing thing, and now that Kevin is committed to getting his uncle's life back on track, he's part of the package.

Reddit user whatsupedit theorizes, "I think Kevin and Cassidy will mirror each other, two people who want to do better but sometimes mess up, and beat themselves up for messing up. I don't think they'll be a couple, at least not this season, and I think they'll be at odds about what's best for Nicky at times (Cassidy thinking she knows better because she's been to war and Kevin thinking he knows best because Nicky is his uncle)."

Bonding over Nicky could be what ultimately leads to Cassidy and Kevin becoming a couple in the future. So far, we only know two things about Future Kev's life: he has a son, and his relationship with Nicky is strong (otherwise, his uncle wouldn't be at his mother's bedside in Kevin's house). The fact that Cassidy is already playing a role in uniting Nicky and Kevin, in a roundabout way, seems key to understanding a future where Kevin's home is where the entire family is going to gather as they say their goodbyes to Rebecca.

Through his sobriety and his devotion to Nicky, Kevin is becoming the man his father always knew he would be — and with Cassidy starting her own sobriety journey as she meets an older vet who knows the cost of war, Kev could be coming into her life at the perfect time. There are no coincidences on This Is Us, and we believe this trio of characters is going to be doing a whole lot of healing this season. And once the healing is done, don't be surprised if romance blooms between Kevin and Cassidy, because the show almost certainly has big things planned for these two.

Netflix
Raven Addresses Her Breakup With SK in the "Love Is Blind: After the Altar" Season 3 Trailer
by Njera Perkins 19 minutes ago

Freeform
Will There Be a Season 2 of "The Watchful Eye"? Here's What the Cast Had to Say
by Monica Sisavat 29 minutes ago