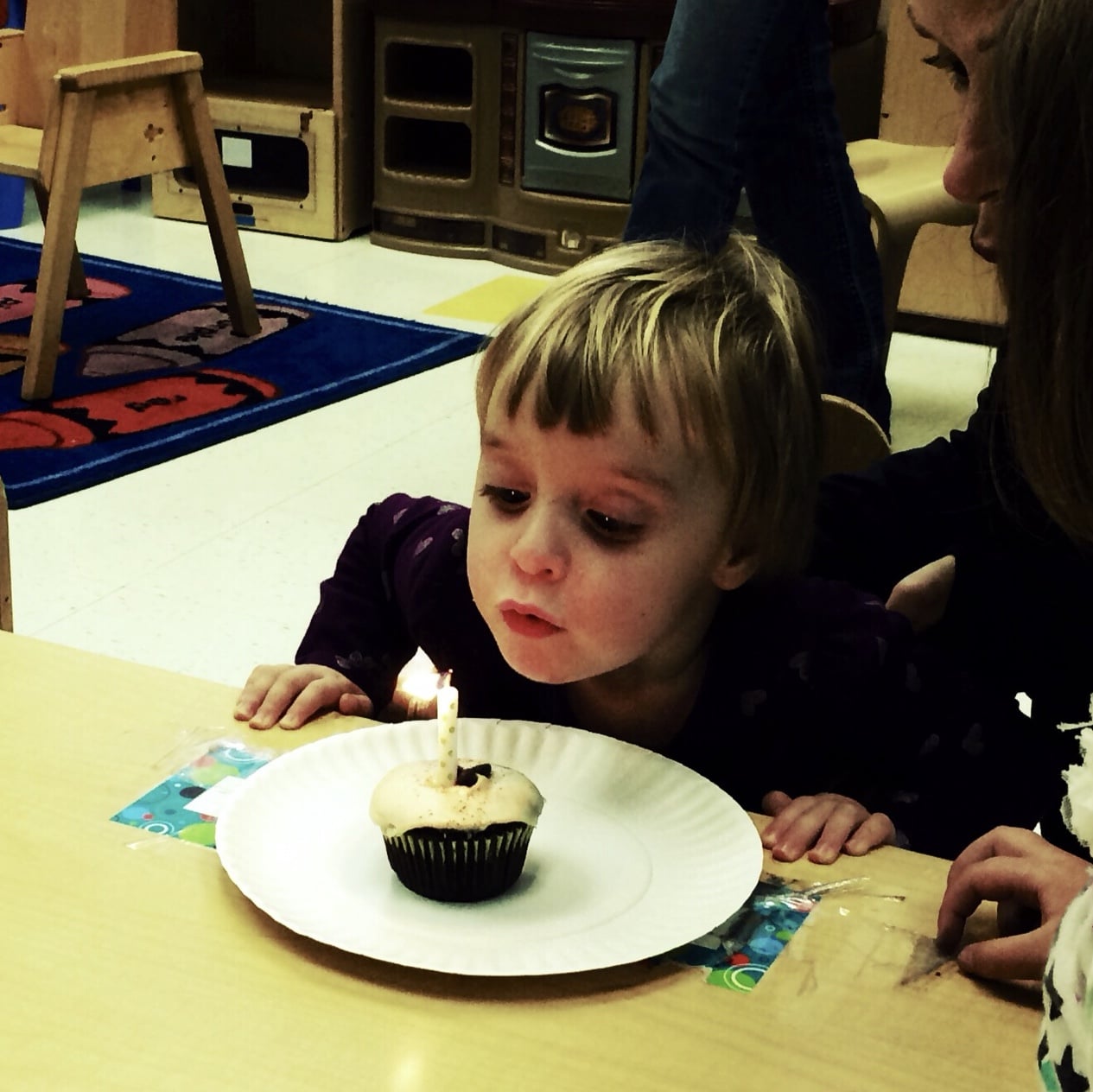 When my girls were babies, I insisted on having elaborate birthday parties for them. Every year, I agonized about decorations, themes, guest lists, and food, while my friends with older kids would kindly hint that I should take it down a notch. They'd say things like, "The kids won't remember them anyway" and "Why waste the money and go through the hassle?" Still, I didn't listen. I wanted everyone I knew to celebrate my children. We'd invite almost everyone we knew, and the chaos and noise always ended up exhausting — and even frightening — our birthday girl.

When the girls were in preschool, we tried hosting smaller groups, but that just felt exclusive in the invite-the-whole-class culture. We also tested out various birthday party package deals at offsite locations, all of which were ridiculously expensive and not much easier to manage. When I did finally figure out that throwing these parties was a huge money waster and time suck, my kids were old enough to really, really want them. I was stuck.

Parties can be difficult and overwhelming for her at best, and downright dangerous at worst. She can't safely navigate bouncy houses or climb walls and tree houses without someone to help her.

Our younger daughter, Freyja, also has a severe physical disability, which was a lot easier to manage at said parties when she was small. Everyone was crawling or toddling around with her, and she was light and easy to carry when needed. We partied on without giving her needs much thought, but as she got older, that changed.

By the time she was in kindergarten, throwing parties completely overwhelmed me, but I did it anyway, because it's what my kids wanted. After a lot of trial and error, we'd ended up more or less back where we'd started: inviting everyone to our house for a couple hours of stressful chaos. But after the most recent of these, as I closed the door behind the last departing child, I vowed that would be the last party we'd ever host. And it was, but still, the invites from classmates and friends kept coming.

For most people, attending other people's parties should be easier than hosting, but for us it's not. Having an elementary school-aged child with a serious physical disability makes attending able-bodied kids' parties very challenging for two reasons. First, parties – especially package-based offsite parties – seem to be designed not only to keep the children busy, but to thoroughly exhaust them, so they're packed full of one physical activity after another. And the locations are almost never accessible, which means if my daughter is to participate, she needs someone – usually me — to help her, and at her age, she no longer wants anyone's help. Second, parties are almost always drop-off. This means that not only does my kid not want me there, but the parents don't want me there, either. Since I'm an introvert, this would usually be ideal, but with Freyja, I have to be there to watch and help her.

And I won't stop bringing her to these parties, because she absolutely adores them. She loves to socialize and be with her friends, but now that she's in first grade, she wants to do all of this without me. And who can blame her? However, because of her disability, she walks with a walker on her most energetic days and uses a wheelchair when she's fatigued. Parties can be difficult and overwhelming for her at best, and downright dangerous at worst. She can't safely navigate bouncy houses or climb walls and tree houses without someone to help her. I feel like the Grinch telling her she can't go, so I suck it up. But not without complaining about how unaccommodating they usually are to myself.

The last birthday party we went to was a perfect example of why I hate them so much. It was at a big indoor gym full of bouncy houses, elaborate rope and tire swings, colorful ball pits, and a labyrinthian climbing structure to scale and slide down. It was an able-bodied first grader's dream come true kind of party, and Freyja wanted to go. I called the location to see if it was accessible and was told it wasn't and that no one on their staff was equipped to assist my daughter. They strongly recommended I attend with her, so I reluctantly reached out to the family to make sure it was OK that I tag along. It was, so we went.

I was the only non-relative adult there. No one talked to me. I tried to make myself invisible, standing in a corner watching Freyja interact with the other kids, ready to spring into action to help her at any moment, and pretending it was the most ordinary thing in the world to be the only mom hanging around this party while the birthday girl's parents, grandparents, and extended family stood together on the other side of the room chatting.

The first activity was a series of bouncy houses, which are both irresistible and terrifying for Freyja, who has terrible balance and struggles with vestibular issues. If she moves backwards too quickly, she gets dizzy and disoriented, and she isn't strong enough to right herself when another kid bounces too close. I moved to get on the line with the kids, but Freyja wouldn't let me approach. She didn't want my help. "No, mama!" she yelled at me. She was embarrassed. She pointed back toward the wall where the birthday girl's family stood. "You stay over there with the grownups. I want to do this by myself!"

She couldn't do this by herself. I wanted to respect her wishes, but I was afraid for her safety. It was her turn, and I didn't know what to do, so I stood there for a moment, while everyone watched and waited. We were both relieved when the birthday girl's fourth-grade sister – the oldest kid of the bunch — left her place in line to help. Freyja let this girl she'd never met help her into the bouncy house as I watched from the sidelines, grateful that she saved us, at least for that activity.

Society as a whole should be more aware of and thoughtful towards people's physical differences. So little is truly inclusive.

Proving my theory that parties like this one were designed to poop the kids out, the activities were spread out over three different floors accessible by staircase, and there was a new activity every fifteen to twenty minutes. Just as Freyja was getting settled in the routine of the bouncy houses, one of the staff members blew a whistle and the entire horde of children went tearing up a flight of stairs, moving on to the next thing. My daughter stood still, unsure of what was happening. I knew there was an elevator somewhere, but it was so far away from the fun that Freyja would have lost precious party time walking over and waiting for it. I also knew that she didn't want to be carried up and down the stairs like a baby, but the railing was too tall for her to climb them safely alone. I didn't want to carry her and her walker up and down the stairs anymore than she wanted me to, but it seemed like our only option.

The birthday girl's family watched as we struggled. I knew they weren't sure whether to help or let me do it alone. I'm never sure either. Help from others is sometimes not very helpful at all, but resisting help makes me feel like a martyr, which is such an ugly feeling that I've trained myself to allow people to pitch in whenever they offer. It makes everyone feel better about the situation, at least in the moment, and allows us all to save face. But now, no one moved, and for a moment I felt rage flare up inside me as I watched them watch me, hating them, hating everyone involved for being so ableist, for having an easy option for their kid's party that was anything but easy for me and my kid.

Related:
1 Employee Went Above and Beyond For a Girl Who Had Her Senior Photos Done at Starbucks

I know this is not anyone's fault. Birthday parties are hard for everyone, and the fact that they're harder for Freyja and me is nothing personal. Nobody chose specifically to have a party that would be difficult for us, but society as a whole should be more aware of and thoughtful towards people's physical differences. Everything is either ableist or it's adaptive. So little is truly inclusive. I resent being told a place is accessible when it turns out that we have to use the back door, or take the freight elevator, or they forgot about the three stairs up, or the doorway is not wide enough, or the chairs sturdy enough. These institutions and businesses either retrofitted as an afterthought because they were legally required to, or not at all, and I navigate them anyway to accompany my child into what should be a kid-only zone she deserves to play in without me. And because it's not on anyone's radar other than my own to provide an option that works well for my child, I resent being put in the position of having to announce her disability everywhere we go, having to apologize for inconveniencing them by her presence and mine, and feeling somehow obligated to make everyone else feel comfortable and selfless for hosting the crippled kid.

I was thinking about this as I stood at the bottom of the steps, strategizing. I was sweating. Eventually, the birthday girl's uncle – a well-intentioned man I did not know – ran over to help us. It felt like an eternity had passed when we finally caught up to the next activity, this time a jungle gym of netting, ropes, mats, and 14 hyper kiddos, screaming excitedly to each other. Freyja, immediately over the indignity of being carried up the stairs, screamed, too, wide-eyed with anticipation. I put her down and righted her in her walker, and she ran toward her pals. This time she let me come with her, and as I lifted her body and put her into the netting with her friends, I felt a crazy surge of love for my kid. She made it to the top level and slid down the curved slide by herself, shrieking with joy, landing in a foam ball pit and forgetting her differences just for a moment. And in that moment, my anger evaporated, too, because I knew she felt like a part of the gang. In that moment, and just for that moment, it was all worth it.