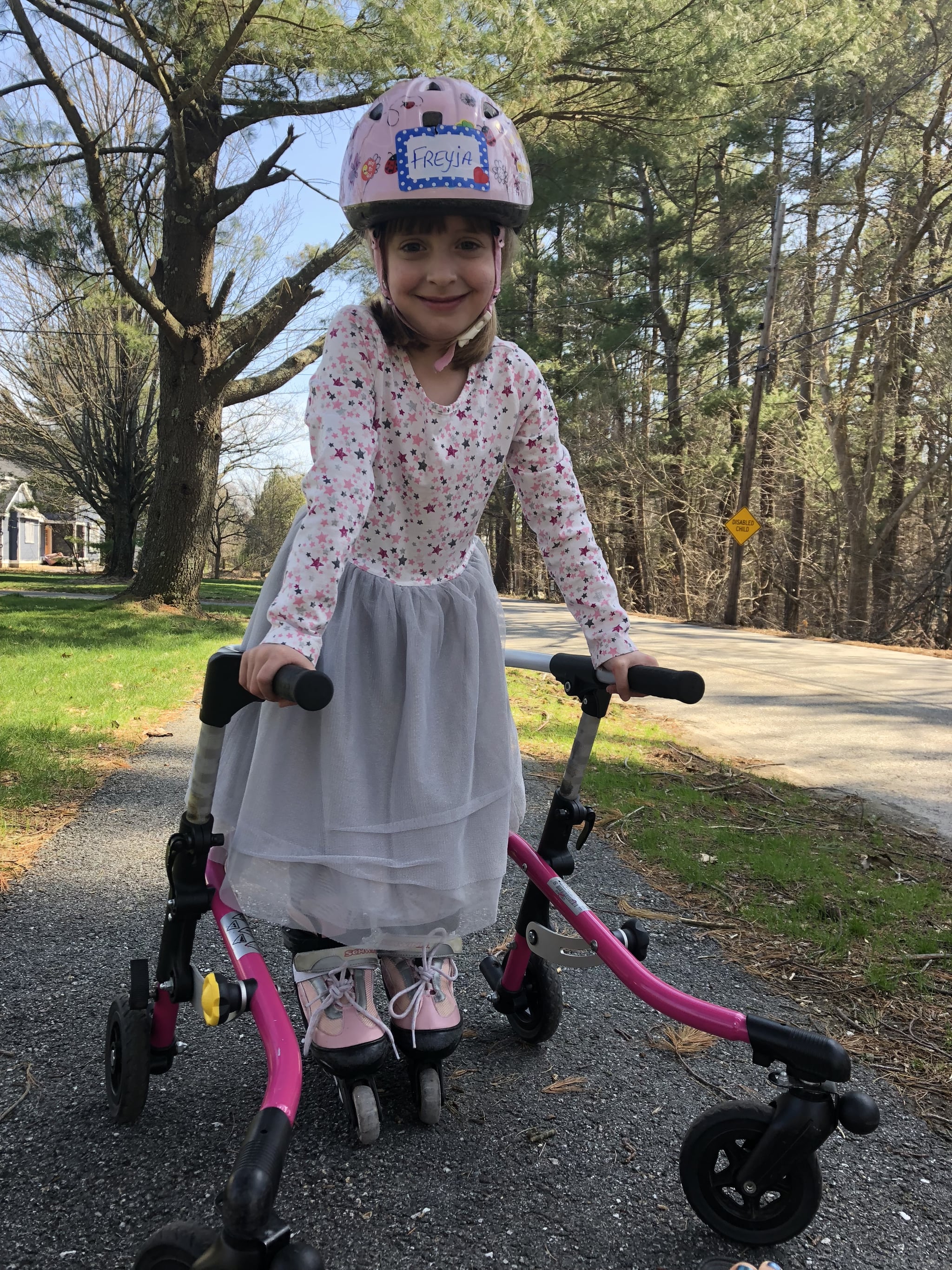 I wish I had a dollar for every time someone told me that diagnosis is just a word. That it doesn't define or limit the child it describes. But a diagnosis is not just a word. A diagnosis is supposed to be information. It's there to help doctors, therapists, agencies, teachers, and families treat or manage a condition. It's there for insurance companies to understand the type of illness and what might help. A diagnosis also brings you into contact with others who share it and who may have already figured out how to deal with it. And it's supposed to help you understand the prognosis. It's supposed to help you prepare.

My daughter's diagnosis does none of those things. Hers was exceptionally complicated and is reflective of a long and difficult process. It took us three years of trial and error to get at what was really happening. For the first year of her life, I was told that babies go at their own pace, but by the time she was 14 months old, it was abundantly clear that something was very wrong. An MRI showed a significant malformation of her cerebellum and brain stem. We learned that she has pontocerebellar hypoplasia type 2, a very rare and very serious neurological genetic disorder. In nearly all cases of PCH2, the affected child doesn't ever walk, talk, sit up, or eat independently. In nearly all cases, the child struggles even with involuntary function and has seizures and dystonia. In nearly all cases, the child doesn't survive.

Related:
5 Things I Do to Cope With My Child's Disability

When she was 2, her preschool placed her in a class with nonverbal children, but she was determined to learn to speak nonetheless. She learned to crawl. By the time she was 3, she was ready to learn to stand.

We were told to expect very little and to prepare for the worst. But Freyja continued to grow and thrive against the odds. We were confused, and so were the members of her growing medical and therapeutic team. When she was 2, her preschool placed her in a class with nonverbal children, but she was determined to learn to speak nonetheless. We increased her speech therapy. With hours and hours of PT, she learned to crawl. By the time she was 3, she was ready to learn to stand.

Now she's approaching her seventh birthday. She's outgoing, talkative, and determined to bring you into her world. Her blond hair and big, expressive green eyes captivate you. She engages you in relatively age-appropriate conversation. You might not understand her speech right away, but she's used to that now, so she repeats herself slowly, spelling her name F-R-E-Y-J-A for you in case you don't understand the way she says Fray-ah. She asks you to push her wheelchair or to admire how well she walks in her walker with her leg braces on.

But Freyja's extroverted demeanor can be dangerously deceptive; we've been denied services because providers who think she's "just so stinkin' cute" don't understand how seriously affected she is. Having an accurate diagnosis should correct this, but for her, it doesn't. Her cognitive potential is not well understood. Her IEP (Individual Education Plan) seems endless at well over 30 pages long. Her neuropsychological evaluation shows strengths and weaknesses so erratic, and intellectual testing scores so complicated, that we had it revised to include a summary in layman's terms so that schools and even hospitals would understand the rationale behind the recommendations. Her results indicate that she belongs in an inclusive mainstream classroom environment with intensive and year-round supplemental support. In short, Freyja's needs are substantial, but she has few if any of the major symptoms and challenges that other children with this diagnosis have.

According to her neurologist, Freyja's brain scans are without a doubt indicative of this particular genetic disorder even though she herself is anything but. This is perplexing to her whole team of doctors, therapists, and educators . . . and us. We're told time and time again by those who know that she simply "shouldn't be this high functioning." Others behave like she's a child whose medical and intellectual fragility should be spoken about in hushed tones and euphemisms. They find her to be a fascinating case, and her growing group of experts want to understand why she has the abilities she does when her brain is as damaged as it is. For me, this isn't fascinating. This is a horror movie.

When I tell people about Freyja, they rush to make me feel better, as friends do. "Just love her," they tell me. "Stay in the here and now. Enjoy your time with her. Make the most of every moment. She's your little angel. You show those doctors that this diagnosis means nothing. Your baby is defying the odds every single day. She's lucky to have parents like you. She takes after her mama with that determination." But this kind of well-meaning advice, even from people I love very much, makes me feel isolated and misunderstood.

Talking to my friends about these thoughts is often unhelpful and awkward; they want to be supportive, but they don't know what to say, and I'm nearly always sorry I opened my mouth because I know I sound ungrateful. I'm not. It's just that when I watch them with their typically developing children, I get a case of the what-ifs, imagining what my daughter might have been like without this disorder. It's unproductive and depressing.

I would choose my daughter a thousand times over exactly the way she is. She's better than the world's best cookie; I want to eat every single inch of her sweet, delicious little self.

On the other hand, her abilities are so far ahead of the other PCH2 children we've come across that I feel like they aren't quite our people either. I'm grateful for the online support systems I've found so I can learn from those with children older than mine. I want to relate to people who get it. But while her brain scans are so like theirs, my child doesn't really resemble these kids at all. The PCH parents I've come into contact with don't see themselves in me. They take solace in these groups for reassurance and support when their child experiences some horrendously scary symptom or when, as it happens much too frequently, their child dies.

I often feel caught in the middle, misunderstood by parents of kids with needs both more severe and less. And yet, I would choose my daughter a thousand times over exactly the way she is. She's better than the world's best cookie; I want to eat every single inch of her sweet, delicious little self. Hearing her giggle is magic. Nothing soothes me after a bad day like her tight hugs and juicy kisses. My heart melts when I watch her at night, her tiny body asleep in her bed. She's blissfully unaware of how medically and scientifically complicated she is. She's just Freyja.

As time goes on, I find I'm less and less bitter about her condition and more and more focused on getting her needs met as best as I can. She attains new skills every day. Even listening to her fight with her sister over a toy makes me smile because that's such a developmentally appropriate thing to do! I do live by and large in the present, inspired by her determination, soaking up her enthusiasm for life. Seeing how much she continues to learn and grow gives me very tentative, very guarded hope that she may grow up to live and work independently someday. And then I remember that the overwhelming majority of PCH2 cases are not like hers and wonder if I should instead be preparing for her funeral or whether I'm doing enough to prepare her for life after mine.

This is where having a diagnosis should come in handy. But hers is practically useless; what has been documented about it is terrifying, and to all who interact with her, it appears to be ill-fitting. And when the specialists don't understand why her abilities and her neurology are at such odds, it's impossible to know how to feel. I can't expect my friends and acquaintances to know the right things to say. When I use the correct term on her paperwork, school districts assume they can't provide adequate care; they think it's imminently terminal. She's been given medications and equipment that she doesn't need by specialists we assumed we could trust to know more about her brain than we do. Even the experts don't quite know what PCH means and therefore don't know how to treat it; even neurologists who do know what it means don't know how to treat her. She's beaten the odds again and again, and every time she does, I can't help but wonder if and when our luck will run out.

I want to tell everyone to just treat her like any other kid, because in spite of it all, she sees herself as an ordinary little girl with some out-of-the-ordinary needs. Recently she walked four city blocks in her walker, which is the farthest she's ever gone. Passersby stopped to say hello or just to watch. One lady smiled down at her. "God bless you!" she exclaimed sweetly. Freyja looked at her in confusion. "But I didn't sneeze," she responded. "I'm just going to the bank with my daddy in my walker."

I can't wait to see what she does next.