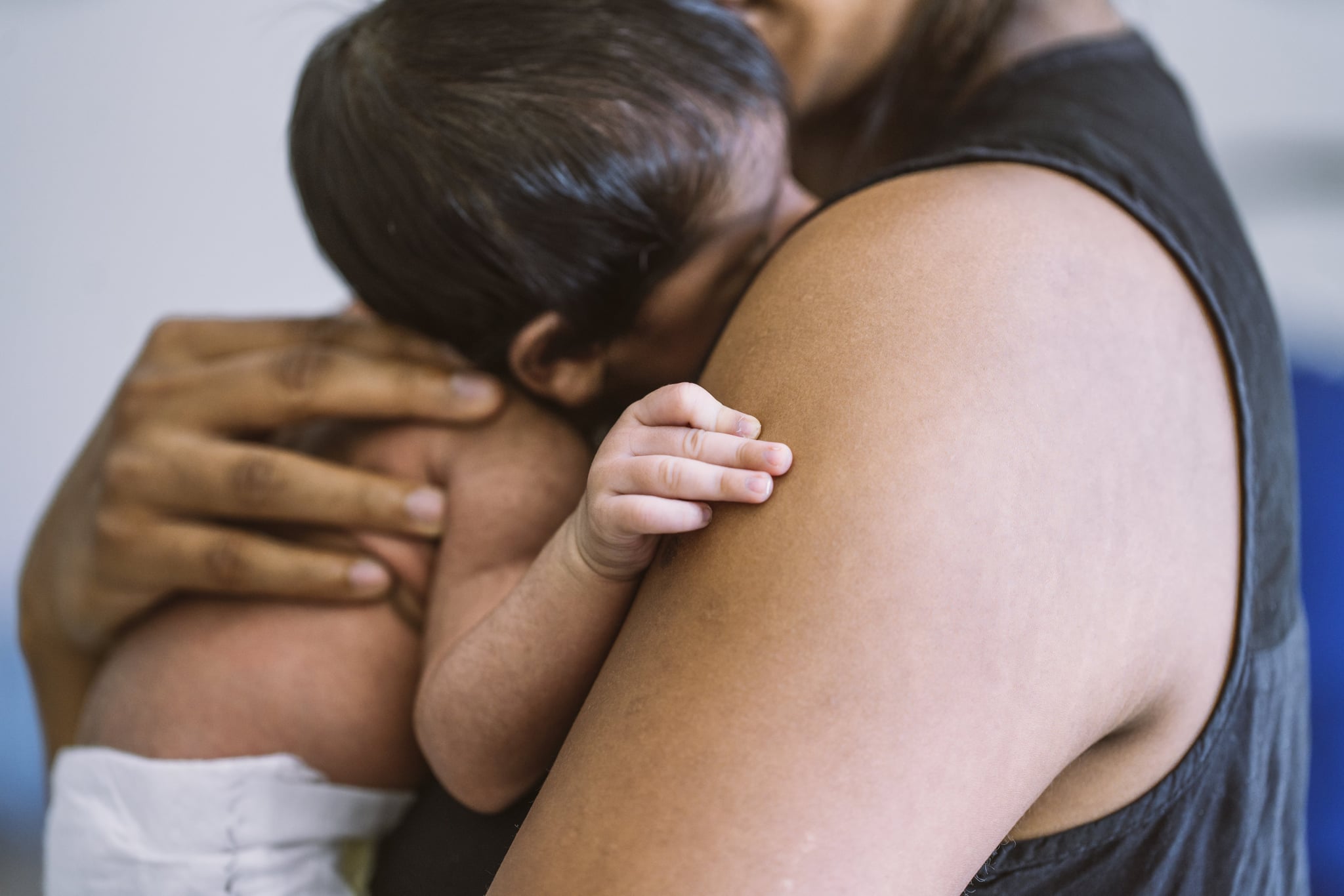 When you get pregnant, there are a million things to stress about, but those are usually things like the baby's health, what you can and can't eat, and whether or not you'll be a good mom (you will be). You're rarely thinking about how stressful pregnancy and childbirth will be on your body, but you should.

I'm not just talking about the unpleasant but garden-variety side effects like morning sickness or the fear of what pushing a giant head out of your nethers will do to your vagina. Those were the things I worried about during my pregnancy with my first baby, Nora, but I was totally unaware of the complication that hit me after I gave birth: postpartum preeclampsia.

It's hard to escape awareness of preeclampsia during your pregnancy — if you go to the doctor for regular prenatal care, you fill a pee cup every time and get your blood pressure taken. Both are to detect preeclampsia (protein in your urine or elevated blood pressure can indicate its presence). Perhaps no one has done more for preeclampsia's awareness than Kim Kardashian — she suffered from the condition when she was pregnant with her first two children, and more recently, Beyoncé talked about her experience with it while pregnant with her twins.

Preeclampsia is undeniably scary; a threat to both mother and baby, it can cause stroke, seizure, or kidney and liver failure for the mother, and for the baby, there's a risk of premature birth, placental abruption, and restricted growth. Often, the thinking is that giving birth to the baby is the "cure" for preeclampsia, but that's not necessarily the case, as I found.

I assumed I was in the clear after I gave birth — because I didn't know it could also be a postpartum condition. I had read a ton about pregnancy in books, blogs, and message boards while I was actually pregnant, but the postpartum variety of preeclampsia never came up.

Why Didn't Anybody Tell Me: There Is No Postpartum Care

I was incredulous when I got the diagnosis, four days after Nora was born. I'd had a surprise C-section, so I was given the option to stay one extra day than was planned. I took it, wanting to have just one more night with the help of the nurses, and I'm so thankful I did — that extra day may have saved my life. Your blood pressure is monitored throughout labor, and then continually in the days after birth, and mine was normal until that last day, the day I was supposed to go home with Nora and my husband. Since I didn't have any noticeable symptoms, I doubt I would have realized anything was off, which is why it's important to know the signs.

I'm one of the lucky ones; if left untreated, postpartum preeclampsia can lead to seizures, stroke, pulmonary edema, thromboembolism, and HELLP syndrome, all of which can be life-threatening.

Grace Wilcox, a friend and fellow first-time mom, had also not heard of postpartum preeclampsia when it happened to her. After a healthy pregnancy, her blood pressure spiked while she was in labor with her son, Walker: "I didn't think much of it — in fact, I thought it was 'white coat syndrome' (anxiety experienced during a medical visit) and because I was progressing quickly, had just been admitted into a hospital for the first time in my life, and had received an epidural — aka a massive shot in my spine." Grace was already discharged and home with her brand-new baby when the condition fully presented itself. Luckily, Grace's doctor had given her some signs to look for, so she was more aware than she may have been. One of those signs was edema, or swelling.

"On the fifth day after Walker's arrival, I was more swollen than I'd been at any point in my pregnancy and felt a bit light-headed and heart-racey," Grace explained. "It's actually hard to pinpoint — or even remember — exactly how I felt, other than I knew something was wrong in my body. My husband and I went to a local pharmacy to use the blood pressure cuff and my reading was through the roof."

Besides swelling, other symptoms of postpartum preeclampsia to look out for include severe headache, blurred vision, nausea, stomach pain, and of course, the aforementioned high blood pressure. For me, high blood pressure was my only symptom, and I didn't necessarily feel different, which is why I'm so grateful for the carefulness of my doctors and nurses.

I'm one of the lucky ones; if left untreated, postpartum preeclampsia can lead to seizures, stroke, pulmonary edema, thromboembolism, and HELLP syndrome, all of which can be life-threatening. The treatment is generally simple once it's detected — to bring your blood pressure down, medication is prescribed, but scarily, the first step is often a magnesium drip to prevent seizures.

Related:
How Other Women Can Learn From My Almost Fatal Postpartum Condition

That IV was easily the worst part of my experience; I was attached to an IV pole for 24 hours while trying to learn how to breastfeed a brand-new baby. I couldn't bend my arm with the tube in it, yet I needed to cradle my newborn in that same arm. On top of it, my blood pressure was continuously monitored, which was stressful in itself. I was getting no sleep because I had a new baby, yet was constantly told by the nurses to try to get rest so I could relax for my blood pressure readings. The whole time, I was devastated — not because of my condition, but because I just wanted to be home, doing boring, exhausted-new-parent stuff. I resented that I wasn't getting the "normal" experience I'd planned on.

Unlike prenatal preeclampsia, which generally resolves with childbirth, postpartum preeclampsia can feel like it lingers. After nine long days in the hospital, I finally came home, and fortunately, only had to take oral medication for a couple of weeks. Three months later, I still monitor my blood pressure daily, looking for any unusual spikes. My case seems to be a short one, though; my friend Grace stayed on her medication for a number of months, while another friend I encountered with it said she was still on her blood pressure meds a year later.

Besides the physical consequences, there's the emotional fallout to account for as well. Like I said, I was resentful that this happened to me at a time when I wanted to be experiencing the first heady days with my baby. I was actually initially discharged two days after my diagnosis, with instructions to call the hospital if my blood pressure readings were over a certain threshold. I had one glorious shower in my own bathroom and a non-hospital meal before taking my first blood pressure reading at home. It was dangerously high. I was instructed by the doctor on call to come right back to the hospital to be re-admitted. I sobbed in my husband's arms after getting off the phone with the doctor. I was exhausted and defeated, and just wanted to take care of my daughter.

Related:
What We Learned From 9 Days in the NICU

Grace suffered from postpartum anxiety as a result of her diagnosis and preeclampsia. "My emotions swung from devastation to total despondence as my visions of spending my first week of motherhood snuggled into my perfectly nested home were replaced with needles, tubes, and beeping monitors," she explained. "Even though my husband and mom were reminding me frequently (and lovingly) that my condition was not permanent and I had a beautiful, healthy boy to focus on, I felt completely void of emotion and hope."

Though Grace has been able to move on from the trauma of the situation, she admits that when she revisits it she still gets those "dark feelings:" "I repeat what became a mantra when I was hospitalized: 'I'm so glad we're here for me and not for him.'"

I remember feeling the same way; my husband and I were rattled by my diagnosis, but in agreement that we could handle my hospitalization, not Nora's. And now, weeks later, we have just our squishy little sweetheart to focus on. The preeclampsia is mostly a distant memory, save for my once-a-day dates with my blood pressure cuff.

While postpartum preeclampsia is rare, it's important to stay vigilant after you give birth, since you can still develop the condition up to six weeks after delivery. I can't stress this enough, because after the baby comes, it's easy to become completely consumed with them, and not check in with yourself. The same goes for your mental health, too — Grace's experience taught her that, as well. "I want to share my story because I want to continue to destigmatize the guilt and shame around postpartum depression and anxiety. I think we sweep a lot of this into the 'baby blues' category, but if you are feeling dark, tell someone."

In any case, just because you have a new baby to look after, don't lose sight of how you feel. After all, you can't take care of someone else until you're taken care of.