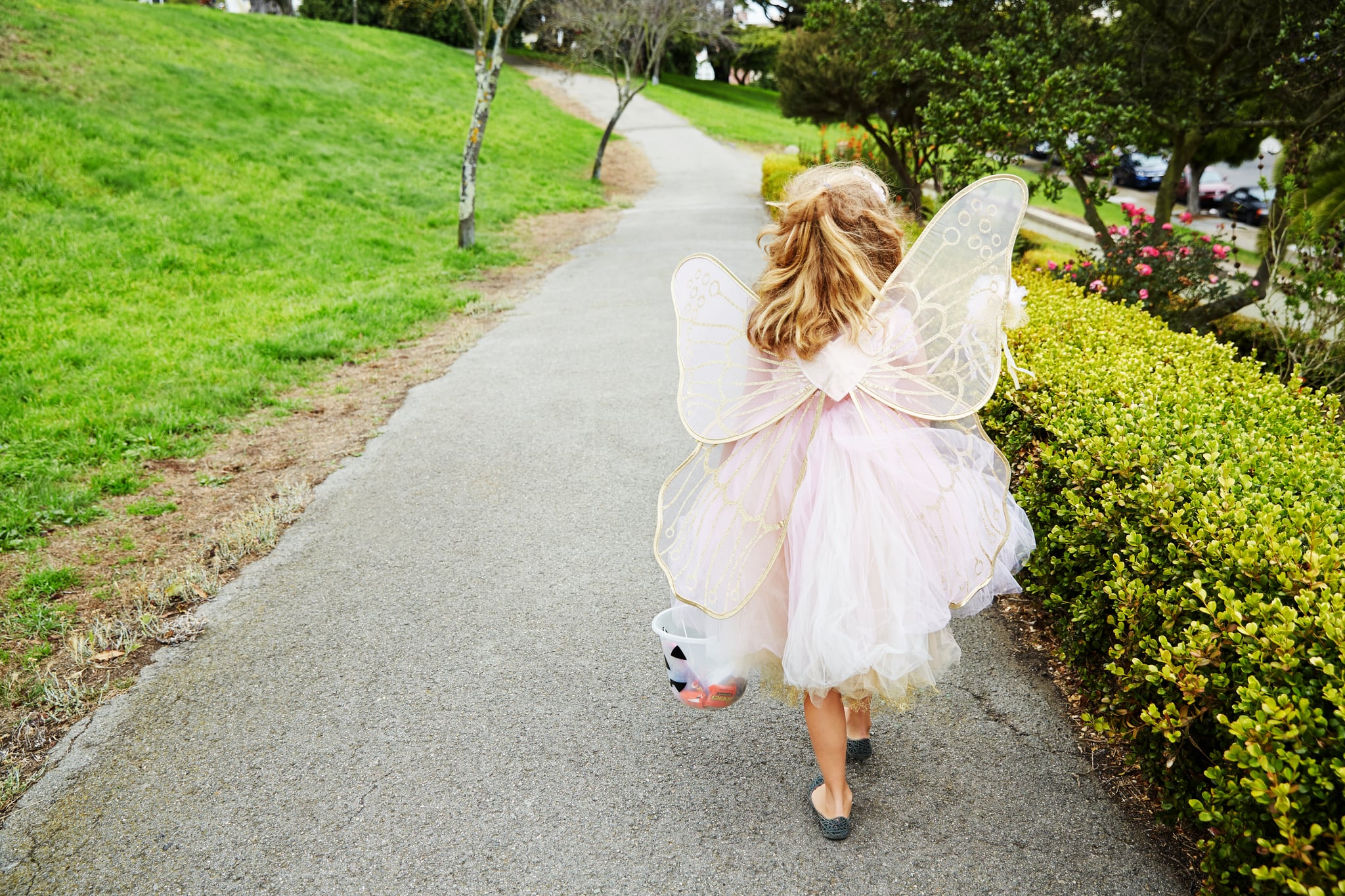 The street was filled with princesses, ghosts, witches, superheroes, and a couple of giant inflatable dinosaurs. Houses were decorated with cobwebs and pumpkins, and children wove their way around the masses of people on this busy Halloween night in Chicago. My daughter, who was 2 at the time, was not very excited about the idea of going up to strangers' houses, the loud noises, or the hundreds of people dressed in costume. I don't blame her either. She cried as we went up to the houses, wanted us to hold her the entire time, and wasn't interested in saying "trick or treat."

She was dressed up in her chosen Moana costume and was as cute as could be as we carried her from house to house to collect treats. But every time we would approach a door, she would hide her little face. That's when I realized how forced it seemed, like my husband and I were the ones that wanted her to have a good time. Really, she would have rather been at a quiet playground on the swings. I had one of those "WTF" moments and realized that I couldn't push her through the evening — I had to let her set her own pace. And since that realization on Halloween night, all of our other holidays have gone a lot smoother. If I'm calm and not pushy with her, she's more calm as well. I didn't overreact when she hid her face, didn't get upset that she wasn't interested, and just let her be her shy little self.

Instead of dragging her house to house, I see how my girl is reacting to all of the sweets and interactions. Is she laughing and thriving? Or is she scared and unsure? I base our night on those reactions, sometimes calling it early if she's really not feeling it. I've found that we are often so eager for our children to enjoy these holidays that we neglect to realize that sometimes, they are just too little, or just too sensitive, or just not that into it. And that's OK! So long as I don't push her, she doesn't have a meltdown. I let my daughter decide which houses to stop at, or none at all. I've even started presenting the idea of staying home and handing out the candy instead. She's much more comfortable in our home but still gets to take part in the fun and see the costumes — and I don't have to worry about regulating candy intake.

She has warmed up a bit more to Halloween as she's gotten older and still wants to be a part of trick-or-treating, though I still offer her the option to stay home to pass out candy. But I do make sure we trick or treat in our tiny community, rather than on a busy Chicago street. Last year, we marched in a parade with about 12 other children and then went trick or treating at just a few houses. This year, she's planning to dress up like a princess, and I plan to keep the holiday just as relaxed. For now, we're done with the busy busy rush on Halloween and are happy to spend the evening calmly circulating our quiet neighborhood.

Halloween is one of our favorite holidays, and since we've let our little one make the decisions (besides how much candy she eats — we still set those boundaries), it has been much happier for us all. I learned my lesson: simplify and we'll have a wonderful Fall evening without the meltdowns.

Relationships
After My Divorce, I Came Down With "This Is My Husband" Syndrome
by Nikki Frias 10 hours ago