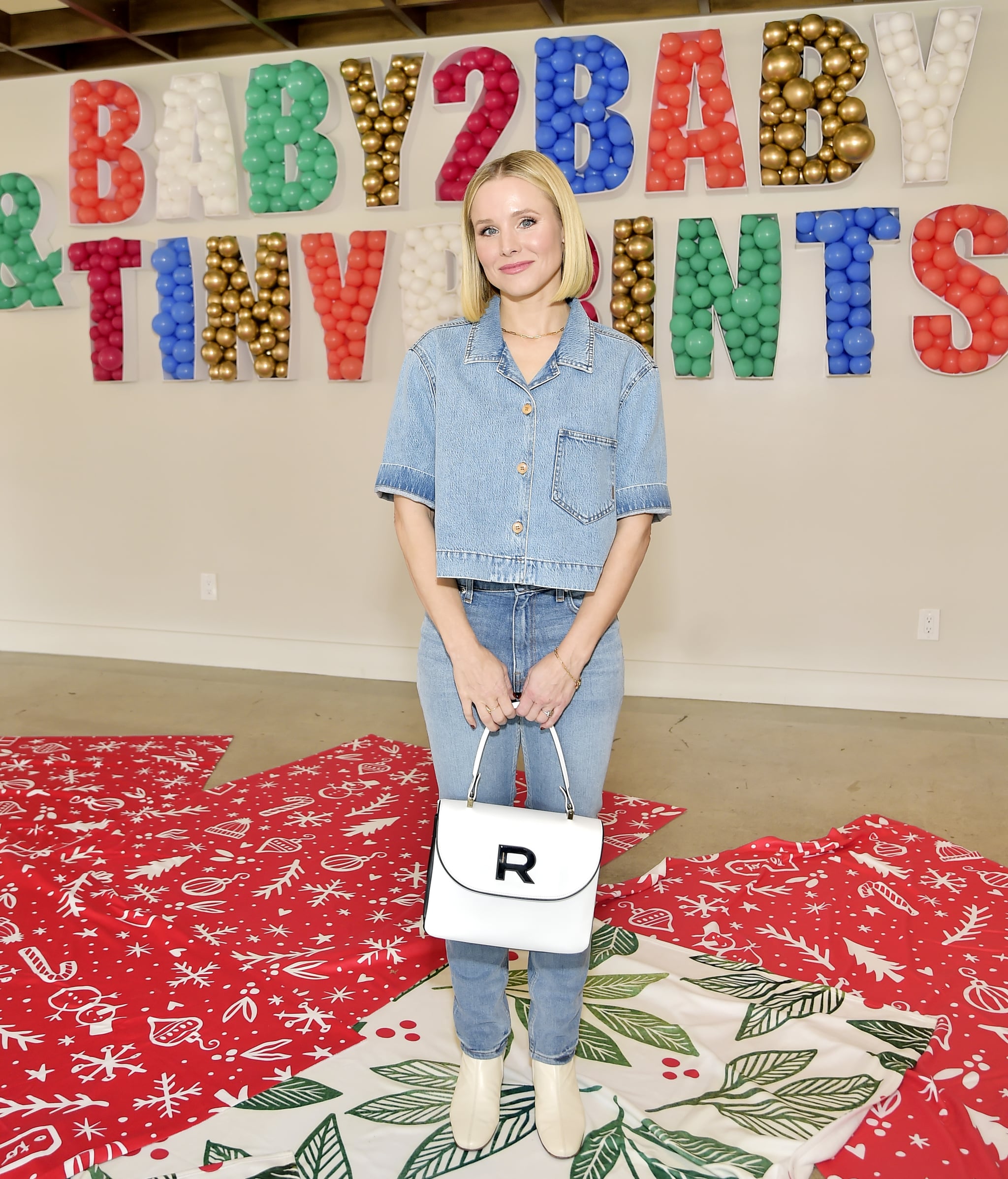 Kristen Bell is certainly a ray of sunshine on screen, but as a Baby2Baby Angel, she's using her infectious disposition to do some good in the community. Recently, she attended a Winter wonderland event run by Tiny Prints and Baby2Baby — a nonprofit that provides basic essentials to children living in poverty — at Casita Hollywood in downtown Los Angeles. While there, she hung out with two classes of second-graders (how cool!), where they made cupcakes, played with real snow, and even played a little foosball. We caught up with Kristen to talk about the event and get her tips on how she teaches gratitude in her own home during the holiday season.

"Just don't overdo it [during the holidays], and don't overspend," Kristen told POPSUGAR. "It's pretty simple. It's exciting to buy presents for your kids, but the thing I make sure we do in our family is open gifts one at a time, starting youngest to oldest. We open all of our presents, so it's not chaotic. My 4-year-old [Delta] starts, and she'll open each one of her gifts. We all watch! It takes a little bit of the chaos out of Christmas morning because she knows that when she opens something, she is to look at the person who bought it for her and say thank you."

Like any parent, Kristen has learned from past mistakes on this front. "My goal is to [teach my kids empathy and how to be grateful]," the Good Place actress explained. "One year, they were so excited, they just came in and ripped everything open, and I was distraught because they didn't know who anything was from. We got over it, and I said that next year we're going to make sure we do it slowly so that we can savor it. It's like a piece of cake. Don't just wolf it down. Notice how great it is and how lucky we are."

And Kristen's wisdom isn't just reserved for receiving presents. She makes it a point to instill in her children that giving gifts is even more important than getting them. "I take each of my kids to the store at separate times on a special day date to pick out a gift for their family members," she explained. "I want them to feel ownership over what they're getting. It can be anything. Get something for your sister, pick something out to make something for your dad."

"I want them to feel ownership over what they're getting. It can be anything."

To really hammer home the point, the 39-year-old mom makes her children wrap their own gifts, a concept we are totally putting into practice ourselves. "It's their responsibility to wrap it. If I wrap it for them, they'll forget about it," she said. "They just can't hang on to these ideas for too long. So I say, 'OK, when do you want to wrap your present?' Sometimes they'll do it early, sometimes they'll do it on Christmas Eve. But either way, they remember the wrapping paper they chose and they write the tag so when they give it to their family members, they have ownership over it and they realize the joy of giving."

Interested in donating money or gently used items to Baby2Baby? Head to its website for the full guidelines on how to get kids the support they need. As a matter of fact, the kids Kristen had the pleasure of hanging out with who live on or below the poverty line went home with a bag of essential items — like coats, a new pair of shoes, and a few toys or games — so nothing is too little when it comes to giving back. "It's an honor to serve these kids!" Kristen gushed. "It feels good. There's no other reason than that. You get to meet new people, new kids. It's just wonderful."

Ed Sheeran
Ed Sheeran Announces Birth of Second Child: "Over the Moon to Be a Family of 4"
by Eden Arielle Gordon 6 days ago