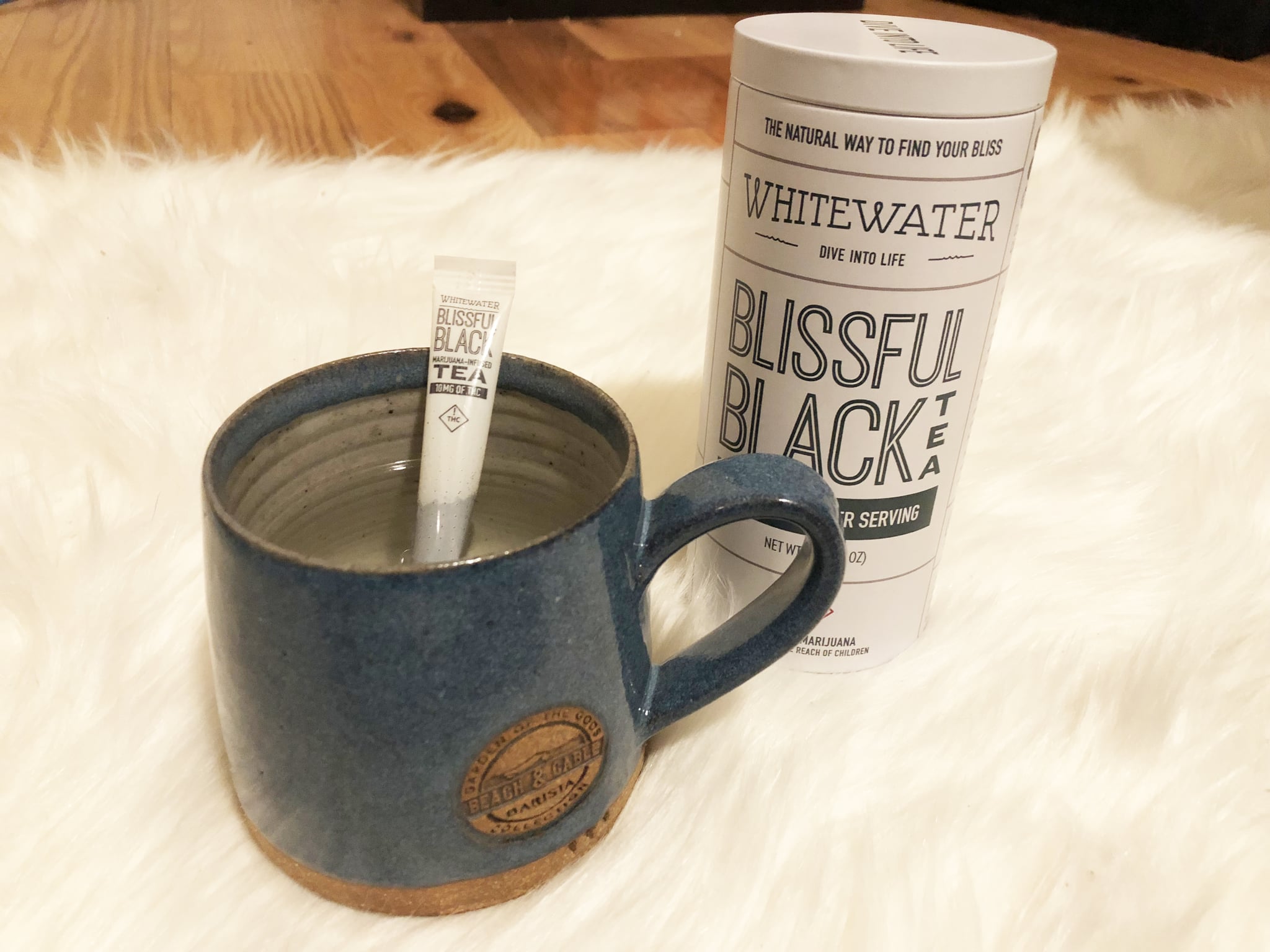 I don't do well with flying. Period. I travel probably more than a dozen times in any given year, and despite the thousands of miles I've traversed in the air, my anxiety over flying has held steady. CBD oil has helped reduce my anxiety on my last few flights — to the point where I wasn't near tears during the whole flight — but leave it to me not to remember to pack my CBD oil when I recently went to Colorado. Luckily, Colorado is a virtual treasure trove of cannabis goodies.

My flight into Denver was surprisingly pleasant, but I was worried about what I'd have to deal with on the flight back to New York without my CBD oil. During my time in Denver, I went to the Stillwater Brands plant and learned of the absolute wonders of its THC tea. Yes, Stillwater makes a tea that is infused with a THC distillate, so you can basically drink your anxiety away — or use the THC for whatever other methods you prefer. For those unfamiliar with CBD or THC, they are both active compounds in cannabis, the biggest distinction being THC is the active ingredient that gets you high.

There are a few things that are really great about Stillwater's tea. For one, it comes in two levels of THC and three different flavors. This allows you to find the THC blend that's right for you, because not everyone can consume the same amount. Stillwater comes in black, mint, and green teas, in either 2.5-mg dosages or 10 mg. For those new to cannabis or who are just casual users, the 2.5-mg option is a great place to start. It's a very low dose and unlikely to leave you feeling stoned.

Missy Bradley, Stillwater's brand director, said the typical recommended dosage of THC is 10 mg, so the low-dose 2.5 is what she recommends to someone who has never tried the product or any form of cannabis in the past. For those who are maybe more used to the effects of cannabis or who have a higher tolerance, a cup of the 10-mg tea should hopefully have you feeling pretty relaxed — and it's still a low enough dose that you can function.

I tried the 10-mg black tea while still on the ground in Denver to get a feel for how it might affect me, and I was pleasantly surprised with it. Bradley said the goal of the tea is to provide people with something that is completely approachable and that will keep you present and functional but still give you the calming effects of cannabis. By using a THC distillate, which Stillwater handles in-house by purifying cannabis oil until it's pure THC, you won't necessarily get the groggy effects that you might from straight-up marijuana.

Related:
Smoke This, Pass That: The Best Types of Weed For Different Activities

Honestly, the product sounds like something I — as well as many people I know — could benefit from in daily life. However, THC and cannabis still aren't legal everywhere, so I had to get my legal fill of Stillwater while still in Colorado. I had another go with the 10-mg black tea right before going to the airport and felt myself relaxing right around when I arrived.

Despite my flight having a bit of a delay, the THC was still in my system by the time the plane was ready for takeoff, which is the most stressful part of any flight for me. As we jetted down the runway, I tried to make myself aware of how I was feeling and used a bit of positive self-talk to keep my anxiety at bay. I found, however, that I felt relaxed and completely calm. I was alert and watching the land pass by out the window, but even as we hit the requisite bumps leaving the Denver area, I felt fine.

Related:
If You Smoke Pot to Reduce Anxiety, It Turns Out There's a Perfect Amount To Use

The THC wore off after about three hours, which ended up being not too far into my flight. However, I was so giddy about the calmness of takeoff that I tricked my brain into thinking it had no reason to have a meltdown, and it mostly worked.

Drinking the Stillwater tea in Colorado made me really wish it were legal everywhere, but right now you can just get it in Colorado. If you find yourself in the area, I highly recommend locating a place that sells Stillwater products, which also includes dissolvable THC Ripple, because the tea is like no other. Not only is it a cozy warm beverage, but it'll give you that calm focus that you're looking for in a completely natural substance.

Travel and accommodations provided in part by Stillwater for the purpose of writing this story.

Image Source: POPSUGAR Photography / Hedy Phillips
Any cannabis products referenced above are not intended to diagnose, treat, cure, or prevent any disease. The writer is not a medical doctor, and their experience is based on personal use, the results of which may not be typical or intended. The legality of cannabis products varies by state, and readers are encouraged to check their local laws before purchasing and using cannabis products. Nothing in this article should be construed as advice regarding the legal status of cannabis products. Any views expressed in this article by a third-party sponsor are those of such sponsor, and do not necessarily represent the views of POPSUGAR.
Healthy LivingHealthPersonal EssayHealthy TravelAnxietyStress ReliefMarijuanaTea