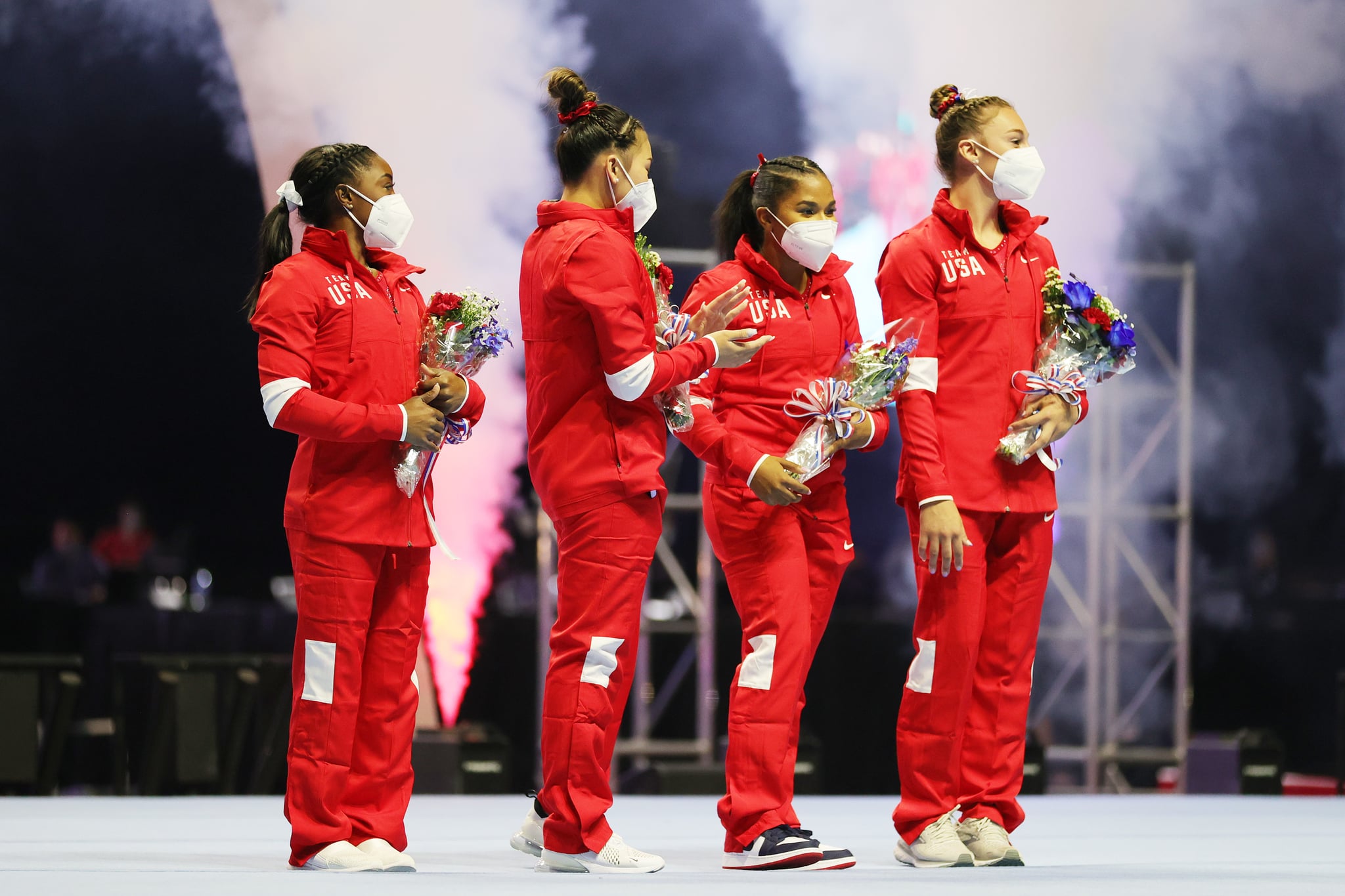 You might remember the legendary Magnificent Seven from the 1996 Atlanta Games. The Olympic artistic gymnastics team was then reduced to six members in 2000 and five in 2012. Now, it's being whittled down to four athletes, which was why the Rio team in 2016 featuring Simone Biles and co. dubbed themselves the Final Five. In addition to the four gymnasts who will make up the women's Olympic gymnastics team in Tokyo — Biles, Sunisa Lee, Jordan Chiles, and Grace McCallum — two gymnasts qualified as individuals: Jade Carey, who mathematically secured one of those spots through the World Cup series last year, and Rio Olympics alternate MyKayla Skinner.

Note: on the men's side, they were only allotted one individual spot, not two. So, in addition to the four men's artistic gymnastics team heading to Tokyo — Brody Malone, two-time (now-three-time) Olympian Sam Mikulak, Yul Moldauer, and Shane Wiskus — Alec Yoder was given that plus-one berth.

The big question, though, is why the four-person team? Bruno Grandi, former president of the International Gymnastics Federation (FIG), wanted to narrow the competitive gap between nations, The Washington Post explained. That meant countries with less depth of talent could potentially compete with dominating nations such as the US and China.

Another reason was that Grandi wanted to put a heavier emphasis on the all-around gymnast (those who excel at all four events in women's gymnastics) as opposed to "specialists" who were picked for teams in the past because of their specific skillset on one or two events. FIG argued that the extra individual spots awarded to athletes in Tokyo would be a good thing for these specialists, that it would create an opportunity for gymnasts who might not be considered from a team capacity to qualify for the Olympics on their own through other competitions outside of the Olympic Trials (like Carey) or through a selection committee choice (like Skinner and Yoder). Carey's strongest events are vault and floor, Skinner stands out with her high-difficulty vaults; and Yoder's specialty is pommel horse. However, after much pushback, the team number is returning to five members at the Paris Olympics in 2024.

Many gymnasts POPSUGAR spoke to over the past year voiced their opposition to the four-person team rule (and gymnasts have been against it from the get-go). Morgan Hurd, who will not be going to Tokyo this summer, emphasized just how short of a "lifespan" competitive gymnasts have. There's only so much time they can spend training on the elite level before they pass their "peak," and narrowing down the team slots, she said, isn't logical.

Chiles, who will be on that Tokyo team, called it "stressful." Former elite-turned-UCLA-gymnast Katelyn Ohashi said that, in her opinion, "Four people every four years is such a slim chance." Carey added to this sentiment by saying she's a fan of returning to a five-person team at the next Olympics.

Women's artistic gymnastics judge Cheryl Hamilton noted that it puts more pressure on gymnasts in the team final. There are four gymnasts total, but three are selected for each event and all three scores count (you can't drop a score like in collegiate gymnastics). "No one can have a mistake because you're counting every score," she told POPSUGAR in 2019. That's why it seemed important, especially this time around, to select gymnasts for the team who can perform on every event, hence the emphasis on all-arounders.

Emily Chan, another FIG judge, also voiced her relief that the five-person team would be reinstated come Paris 2024. She speculated that perhaps FIG realized "how complicated and messy" the four-slot rule is.

Due to safety precautions, the Olympic artistic gymnastics teams were allowed to name up to five team alternates, otherwise referred to as "replacement athletes." Five were announced for the men: Cameron Bock, Allan Bower, Brandon Briones, Alex Diab, and Akash Modi. Four were announced for the women: Kayla DiCello, Kara Eaker, Emma Malabuyo, and Leanne Wong. On to Tokyo they go!