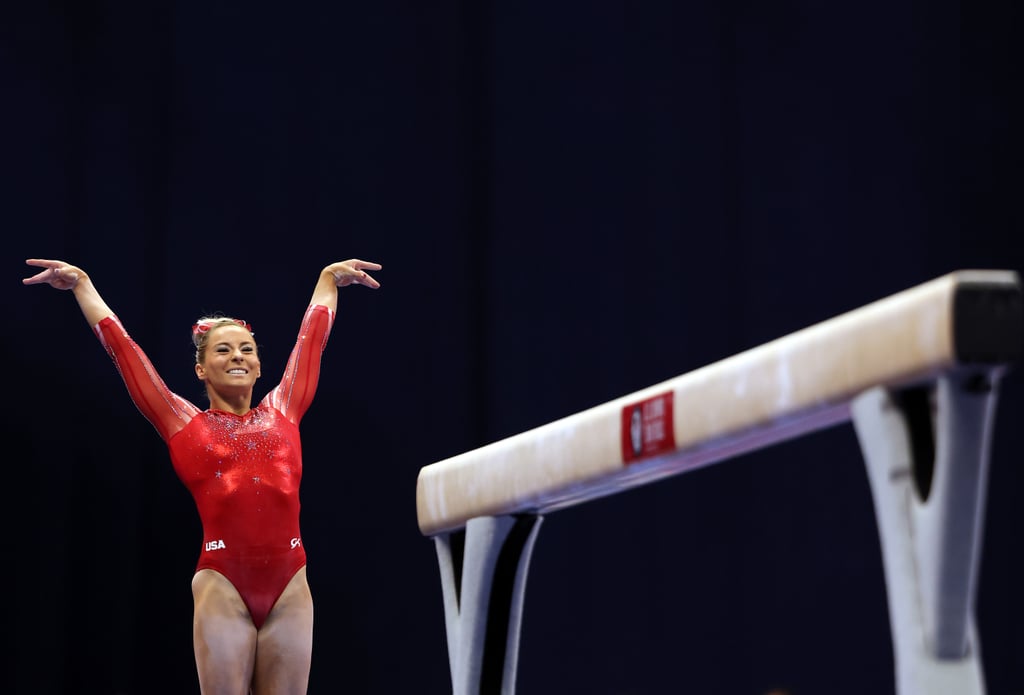 MyKayla Skinner is officially going to the Tokyo Olympics this summer as an individual gymnast. To recap, there were four US women's artistic gymnastics team spots up for grabs along with two separate spots reserved for athletes who will not be vying for a team gold but will compete, instead, for spots in the Olympic all-around and event finals. Jade Carey mathematically secured her individual berth last year, so that last individual spot was in question heading into the two-night Olympic Trials on June 25 and 27.

Skinner, 24, knows what it's like to contend for a position at the Olympics. In 2016, she flew to Rio, where the "Final Five" came out victorious, and stood by as an alternate along with Ragan Smith and Ashton Locklear, despite finishing fourth in the all-around at the Olympic Trials.

Skinner had a rough start of the new year after contracting COVID-19 in December and being hospitalized for pneumonia. Her training efforts paid off, though, with a fifth-place finish in the all-around at Trials. "I survived," Skinner said on The Today Show of her Olympics comeback once being named an individual Olympic gymnast. "I mean, I wanted to give up so many times. I was like, 'I don't even know if I can do this anymore.'"

After three years competing on the collegiate level for the University of Utah, Skinner deferred her senior season to vie for a ticket to Tokyo. Though she is returning to school to finish up her degree once the Olympics are over, she will be retiring from the sport at the conclusion of the Games. She previously earned NCAA titles on floor exercise (2017) and vault (2018) and finished second in the all-around both years. According to Slate, the Arizona native also held a 161-routine hit streak, which was reportedly the longest in NCAA history.

Related:
After an Inspiring Comeback, Gymnast Laurie Hernandez Won't Be Heading to Tokyo

Even though Skinner kept many difficult skills in her collegiate routines (she did a double-double backflip on floor as her first pass, for example), coming back to compete as an elite gymnast ultimately requires a lot of rigorous work. The training is more intense, yet Skinner did say that she's found balance and learned to cut back her practice hours. The routines also get more technical in the elite world (for instance, she had to return to doing four tumbling passes on floor as opposed to the three she did in college gymnastics).

The scoring is a lot different, too — instead of college's perfect-10, elite gymnasts get a combined execution score and difficulty score. Therefore, it's not just about executing everything perfectly; it's about throwing hard skills to up your chances at seeing those big numbers. In college gymnastics, there's a greater emphasis on perfection because you'll see rankings differentiated by less than a tenth in most competitions. When you're competing on the national and international levels, you typically can't play it safe.

Skinner's coach, Lisa Spini of Desert Lights Gymnastics, told Arizona Republic back in 2019, "She would have made the [2016 Olympic] team in any other country in the world and should have made it in our country. She feels like she has unfinished business." Skinner herself said, "While I love college gymnastics, I'd like to try and compete for my country. I see the opportunity to pursue an Olympic berth as a chance of a lifetime."

Skinner, who was also an alternate at the 2019 and 2015 World Gymnastics Championships, brings elements of collegiate gymnastics into elite competitions, like that over-exaggerated "college salute" and often encouraging the crowd to cheer. Ahead, check out some of Skinner's career highlights, and watch her compete on the world's biggest stages.