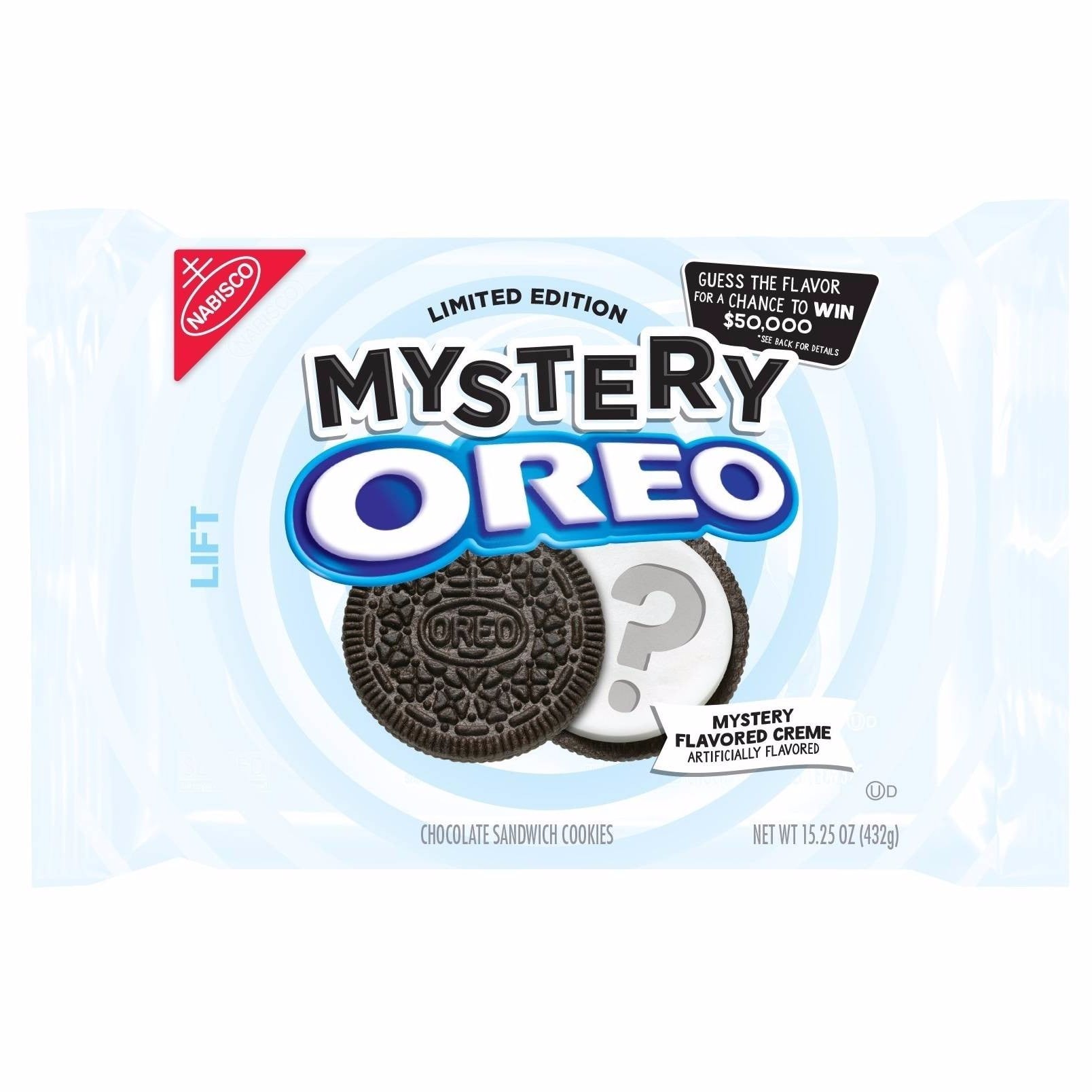 Update: Oreo has revealed the mystery flavor! The official Mystery Oreo flavor is . . . Fruity Pebbles! After months of letting fans guess, Oreo has spoken. In a statement, the company said, "The cookie features creme inspired by the intense fruity flavor of Fruity Pebbles cereal, sandwiched between two chocolate biscuits." You can still find the "mystery" flavor in its unusual packaging in stores, and now you won't have to do any investigating as you snack. Childhood cereal-lovers, rejoice!

Original story: Oreo is never shy about announcing its wild and unexpected flavors like Hot and Spicy and Peanut Butter and Jelly, but this time around, it's keeping things under wraps. The new Mystery Oreos were announced in August and have finally arrived on shelves, and Oreo wants you to guess the flavor for a chance to win $50,000. Whether you're in it for the money or not, it's still fun to try a mystery-flavored cookie and let your taste buds do the thinking for you!

Being the extreme Oreo enthusiasts that we are at POPSUGAR, we tried the mysterious Oreos and put our thinking caps on tight. There truly are no hints about what the flavor could be, thanks to the bare-bones white packaging and the steadfast silence from Oreo reps — they're serious about not leaking the flavor. So what was our first reaction upon taking a bite? Fruity . . . definitely fruity. And then the vague fruity flavor became more familiar as we kept chewing, until something concrete came to mind: cereal! We're betting on Fruity Pebbles or Froot Loops. We sense a somewhat-artificial but still-tasty creme filling that's strikingly similar to the flavor of Fruity Crisp Oreos, which were released last year. It would be a total bummer if Oreo simply rereleased the same flavor in disguise, so we have our fingers crossed for Fruity Pebbles or Froot Loops!

As it turns out, people on the internet agree and are getting the same fruity-cereal vibes.

The mystery flavor of Oreos is totally fruity pebbles

yo them new mystery oreos are sooo good 🤤

verdict: the mystery oreos taste like fruit loops and they are NOT GOOD

We'll have to wait to see what the official flavor title is and who the lucky winner of $50,000 will be. Oreo contest submissions are open until Nov. 30.

OREO
After a 4-Year Hiatus, Pumpkin Spice Oreos Are Back
by Sara Youngblood Gregory 4 days ago