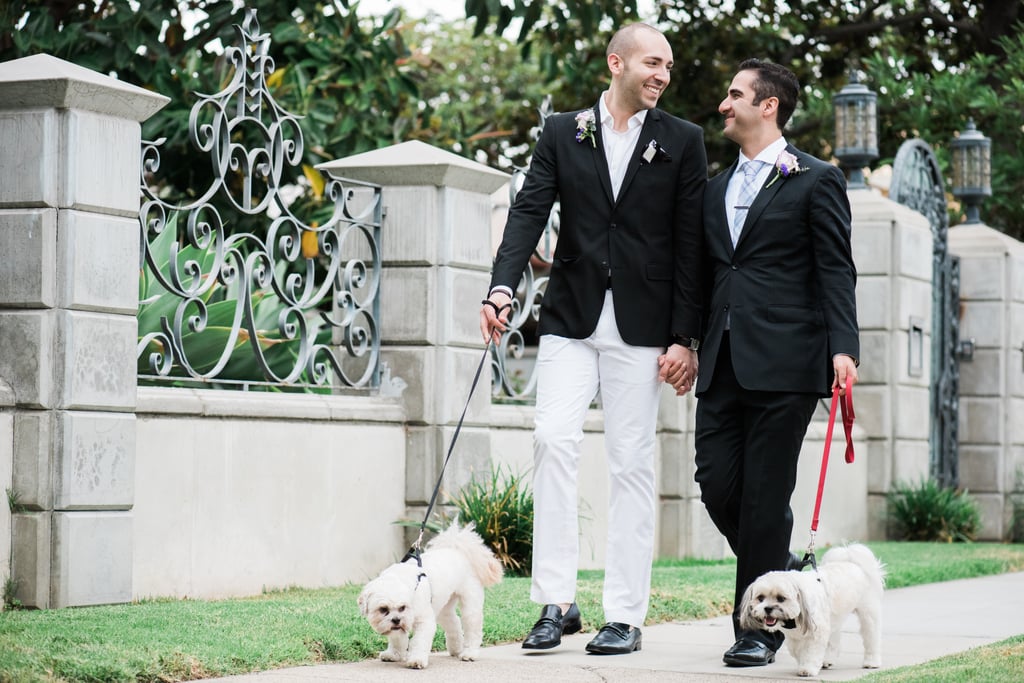 Alfonso and Rod weren't looking for love but luckily found each other anyway. They had both gotten out of unhealthy relationships and didn't want to jump back into dating yet. But Alfonso matched with Rod on dating site OKCupid, where they discovered they used to work in the same building in Universal City, CA. Rod agreed to go to dinner, and that evening was only just the beginning.

"It was a Tuesday night, and they were there for three-and-a-half hours gabbing away as if they'd known each other their whole lives, and effectively closed down the restaurant for the night," said their wedding photographer Derek Chad.

Fast forward and the two planned a week-long European vacation where Rod spontaneously proposed. Since Alfonso had never traveled to Europe and Paris was first on his bucket list, Rod thought Alfonso would pop the question there. Marrying each other had always been the plan, so it didn't seem too far-fetched of an idea. After a whole day of site-seeing, they decided to have dinner in their hotel room. As they admired the twinkling Eiffel Tower from their balcony, Rod took the plunge in the heat of the moment. Alfonso was saying "Yes!" throughout the proposal, and after a romantic celebration out on the balcony, he explained that if he hadn't been so busy at work, he would've bought the rings he was already looking at. "I didn't want to half-ass the proposal so I didn't ask you till I could find time to buy them, bring us back here and propose to you at the top of the Eiffel Tower."

When it came time to choose their wedding venue, they decided to go with the first place they visited despite having created an Excel spreadsheet with 86 options. A cozy Italian Restaurant in Beverly Hills, CA, called Il Cielo stole their hearts immediately. Although neither of them had ever even heard of the place before, they knew it was the one. Rod and Alfonso recognized both of their Italian and Mexican cultures in the wedding. Their original plan was a destination wedding to Provence but decided to bring a little Italy to LA since Rod's mother is unable to travel. Even their 1-year-old puppies were included in the ceremony as their ring bearers!

They ended up wearing the rings Alfonso looked at earlier as their wedding bands instead. They got lucky with two discontinued Chanel rings that a salesperson was able to track down across the world and went with those for their engagement.

After their lovely nuptials, the couple headed to Disneyland, then a two-day honeymoon in Rome, Italy, and finished off with a 10-day Greek Isles cruise.

F*cking Awesome Females
History Made: Katie Sowers Is the First Female and Openly LGBTQ Coach in the Super Bowl
by Samantha Brodsky 14 hours ago

Target
This Couple Had Their Engagement Shoot at Target, and the Photos Are So Relatable
by Haley Lyndes 5 days ago