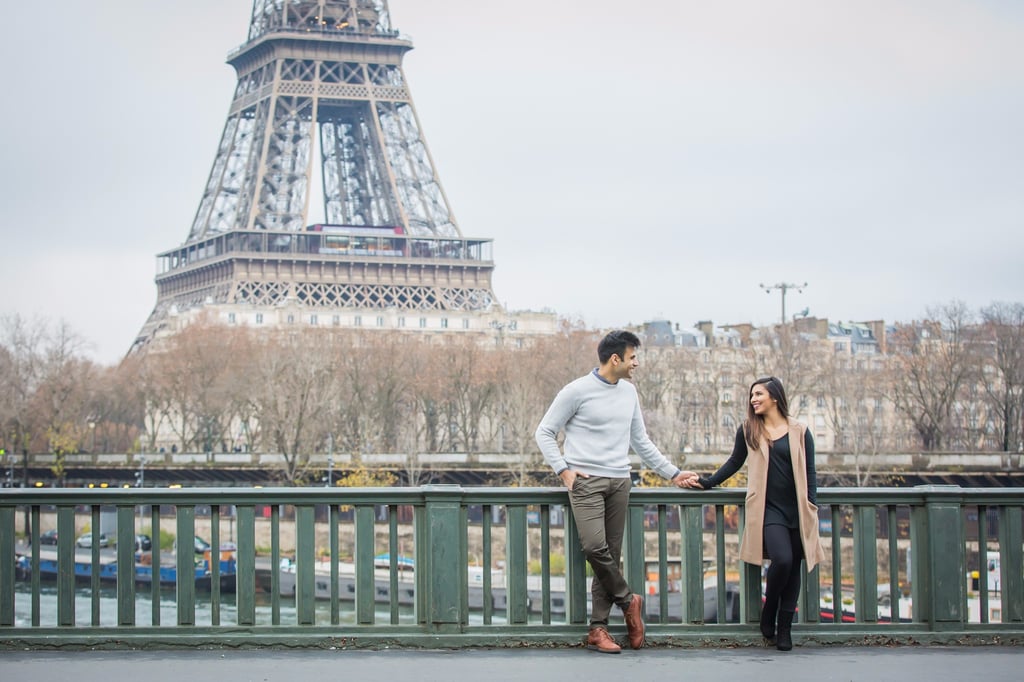 This Couple's Engagement Shoot in Paris Is So Cute, but Their Proposal Story Is Even Sweeter

Sabrina, of fashion and lifestyle blog Simply Sabrina, and her husband Sahir share a love story that dates way back to their childhood. The two met at their mosque at 8 years old, became good friends, and started dating when they were 15. Ten years later, Sabrina and Sahir tied the knot.

On their seventh-year anniversary in 2013, Sabrina woke up to a Twitter alert from Sahir that read, "Hey honey, can you answer a few questions for me? #loveyou," with a quiz link attached for her. She opened the quiz, which recalled very detailed moments throughout their relationship so far. Every time she tried to give him a call, it went straight to voicemail, in which he finally responded that they'd only be communicating through tweets that day. Soon, she received another tweet from him asking her to lunch. "@SimplySabrina New Rules! Every place we go, you have to tweet the location!! #loveya" Each place they visited was a special landmark, including their first date spot and high school.

After sitting through an hour-long drive, blindfolded, the two finally arrived a luxury salon and spa in their college town where Sabrina's best friend and college roommate were waiting. After some primping, her best friend shared that they were instructed to pick out an outfit for the evening. After landing on the perfect dress, Sabrina was given a key to a hotel suite to get ready and finally taken to their favorite restaurant where Sahir was waiting. But it wasn't until after dinner and dessert when he finally popped the question and promised to re-create this special day every year on that date.

On their 11-year-dating anniversary, the couple came to Paris for their Winter engagement session. They walked around the city capturing sweet moments together and taking in the breathtaking scenery. It was such a romantic addition to their already amazing love story.