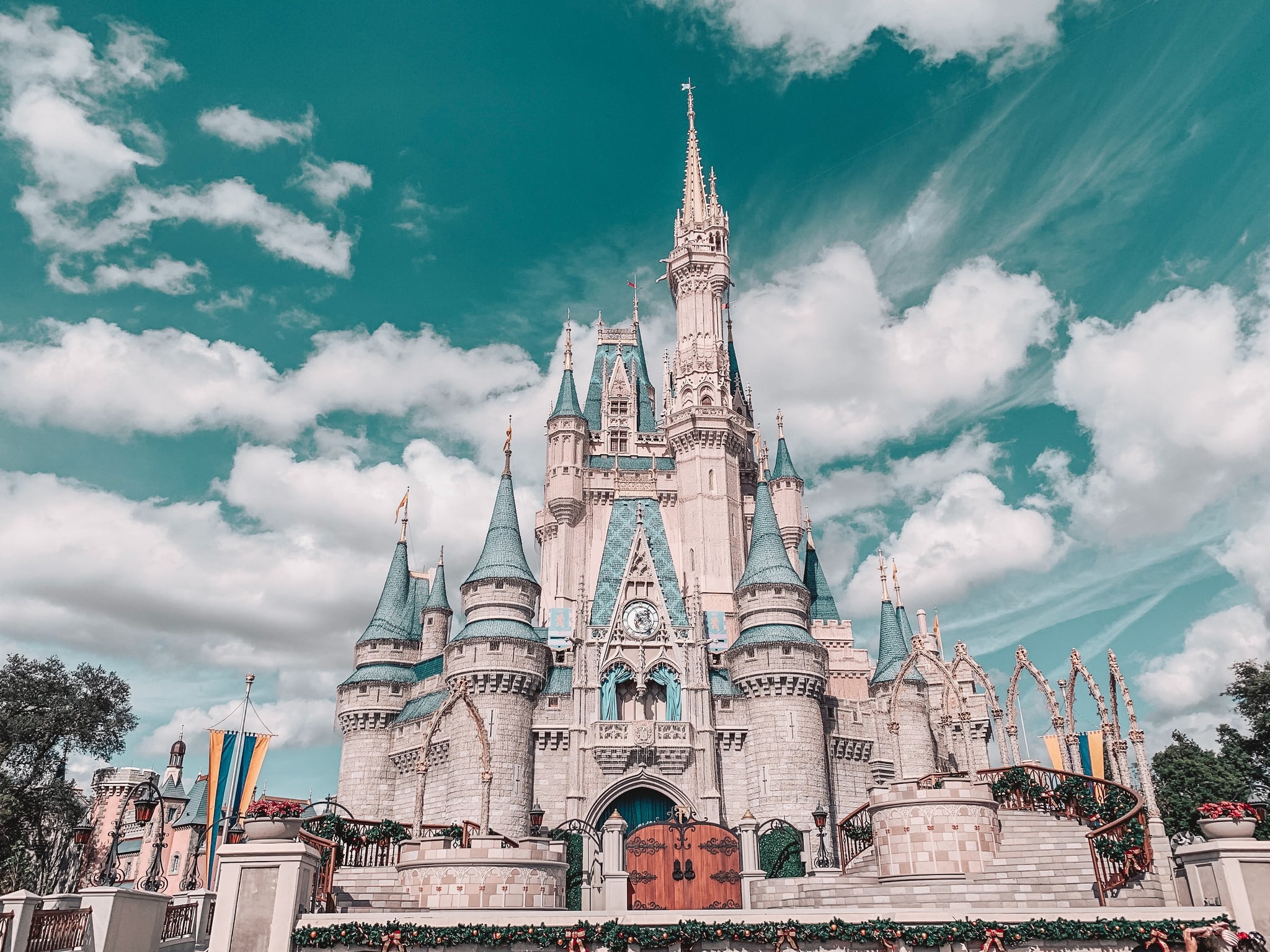 Disney and I have history. In the fourth grade, each student in my class was allowed to plan a class indulgence for everyone to partake in, which aligned perfectly with my baby Type A tendencies. When my turn came, I asked that we watch The Little Mermaid and take naps. I didn't care that the movie had been out of theaters for years at that point — I loved Ariel and I assumed everyone else did too. I can still remember waking from my nap to find my classmates staring at me. I wasn't concerned with what these poor unfortunate souls thought; Disney (and naps) were an indulgence I needed as a kid.

In my early 20s, I loved the nostalgia of Disney even though it was displaced from my regular life. I could access it quickly when needed, like when I wanted to watch Beauty and the Beast after I had my wisdom teeth removed. Like an old friend, it was familiar, comforting, and I knew it would always be there. But as I entered my 30s, the incandescent glow of Disney began to flicker. Sure, I loved hearing my niece sing "Let It Go" at the top of her lungs, but I had no idea which character Kristen Bell played. I had the world to see, and as I craved "adventure in the great wide somewhere [else]," my need for fantasy universally waned. I assumed that was just part of growing up. I simply couldn't rely on make believe in the real world.

That changed when my sister died.

I found it deeply comforting, and it wasn't something I had expected to find at the Magic Kingdom. I never expected to feel a sense of community with people I'd never met.

Her death was sudden and unexpected. Not only was she was my little sister: she was my best friend, too. We shared everything, from doctors to dentists to hair stylists. We were intertwined, and a world without my sister became the darkest world I could have ever imagined. I longed for anything that could soothe my broken heart, even for a moment, but nothing worked. The pain was physical from the moment I learned of her passing, and the relentless tearing at my spirit never ceased. Even when I was busy, the loss replayed in my mind again and again. I felt as though I had become a different person, and part of that change was a re-evaluation of what I considered to be important.

My family would frequently tell me that anyone could read the heartbreak in my eyes. My grief had isolated me and made me feel very seen. I struggled to keep eye contact and went months without posting photos on social media. I was terrified that strangers would know I was a broken person even from far away and take advantage of me. I felt vulnerable in crowds, anxious, and oddly judged for my bereavement. Friends that I knew loved and supported me would stress that I needed to "go back out and live my life," claiming it was what my sister would want. I felt completely alone. My sister and I were so close that I wasn't sure she'd even want me to move on. We always had a promise between us: "If you go, I go." This promise pertained to all aspects of life, and it began to feel as though it applied to her passing as well. I felt I was abandoning her as each day passed, even though she was the one who was gone. I was barely holding on.

I often wondered how others found meaning in what felt to me like a meaningless world, but I now ached for fantasy. I imagined parallel planes of existence where my sister and I still spent our days together. Now more than ever, I wanted to be surrounded by the happiness that eluded me. I wanted to rewind time. I needed to find an intersection between distraction and joy, however brief.

Related:
After 27 Years, I Finally Discovered the Secret Behind Disney Magic

I suddenly wanted to watch Winnie the Pooh. Soon after that it was The Haunted Mansion. I needed nostalgia. I needed to feel safe again, even though it felt impossible. I believed, perhaps too openly, that nothing was going to ease my loss. Still, the desire grew. Could the "Happiest Place on Earth" provide respite to the saddest person on property? I booked a short trip to Disney World to find out, and aimed to embrace Walt Disney's promise that within the Magic Kingdom I would "leave today and enter the world of yesterday, tomorrow and fantasy," because frankly, I really needed to.

While I could give a detailed account of my day at the Magic Kingdom, I think that would take away from the experience. I could never capture the magic and relief I found that day. I can say that while there, I was absolutely overwhelmed, but for the first time since I lost my sister, it was welcomed. I had worried that a world that felt mediated would further add to my pain. I worried choreographed dances, endless smiles, and air pumped with waffle cone scent would feel disingenuous. Instead, all those experiences felt kind, welcoming, and warm. It felt wholesome and nourishing, which was shocking given the amount of funnel cake I consumed.

When we returned to the park for fireworks that evening after an afternoon break, we sat behind the castle for the nightly display. I had wanted to tuck myself away from the crowd, just in case it overwhelmed me and I embarrassed myself. I had had a long day in the blazing heat, and while I had a great experience, I felt increasingly fragile. Even at night, the Magic Kingdom glows in an incandescent light, making it easy to see those around you, and I wanted to ensure I didn't appear visibly upset.

As the music began, I lost it. I couldn't stop my tears. I could only think of my sister. My husband wrapped his arms around me and I allowed myself to look around at my surroundings. To my surprise, many others were crying as well. The music, the environment, the day, and their own memories had moved them to tears. Everyone's circumstances were different, and surely the vast majority of them weren't experiencing an acute loss, but it felt liberating being in a space where people could allow their emotions to flow freely. My grief felt singular. I found it deeply comforting, and it wasn't something I had expected to find at the Magic Kingdom. I never expected to feel a sense of community with people I'd never met.

Related:
9 Adults Share Why Going to Disney Is Still So Special to Them

Wanting to savor this feeling, I decided to get ice cream at The Plaza to end the evening. It felt like the perfect way to say goodbye. As we waited in line, I noticed a young girl of about four or five sitting in a stroller, exhausted. Her mother handed her a freshly made ice cream sandwich. It looked amazing, and the little girl obviously couldn't wait to dig in. Sadly, the freshly baked cookies, combined with her exhaustion, made holding onto her ice cream nearly impossible. The cookies slipped all around, pushing the hand-scooped ice cream out halfway from between the cookies. Frustrated, she put her sandwich back on the plate, then tried lifting the top cookie off once: then a second time, and one final time before realizing it was simply impossible to eat with her bare hands. Feeling defeated, she began to cry quietly to herself. Shortly after, her mother handed her a spoon and she made a go of it. She simply needed the proper tools to get through it. I saw myself in this little girl. I left that ice cream parlor knowing that I had to keep trying, and that without the proper tools, I'd never find relief from my grief.

I know people choose to visit Disney World to celebrate, but I'm here to tell you that if you're hurting, it can provide a day of relief that you wouldn't have otherwise. My day at the Magic Kingdom did not erase my grief — that will always be a part of me now. But my sister is a greater part. Love will always be greater than sorrow, sometimes you just need to know where to find it.

Acne
I Have Clear Skin, but Only Because I Take This Oral Medication
by Jessica Harrington 4 hours ago

Netflix
Yes, Everyone Is Still Talking About Bo Burnham's Inside Special — Here's Why
by Morgaine McIlhargey 8 hours ago

Disney Junior
Mickey and Friends Are Going to Be in a New Disney Junior Series: Mickey Mouse Funhouse!
by Alessia Santoro 11 hours ago

Family Travel
Fireworks Are Returning to Disneyland and Walt Disney World, and We Are Bursting With Excitement
by Megan duBois 11 hours ago