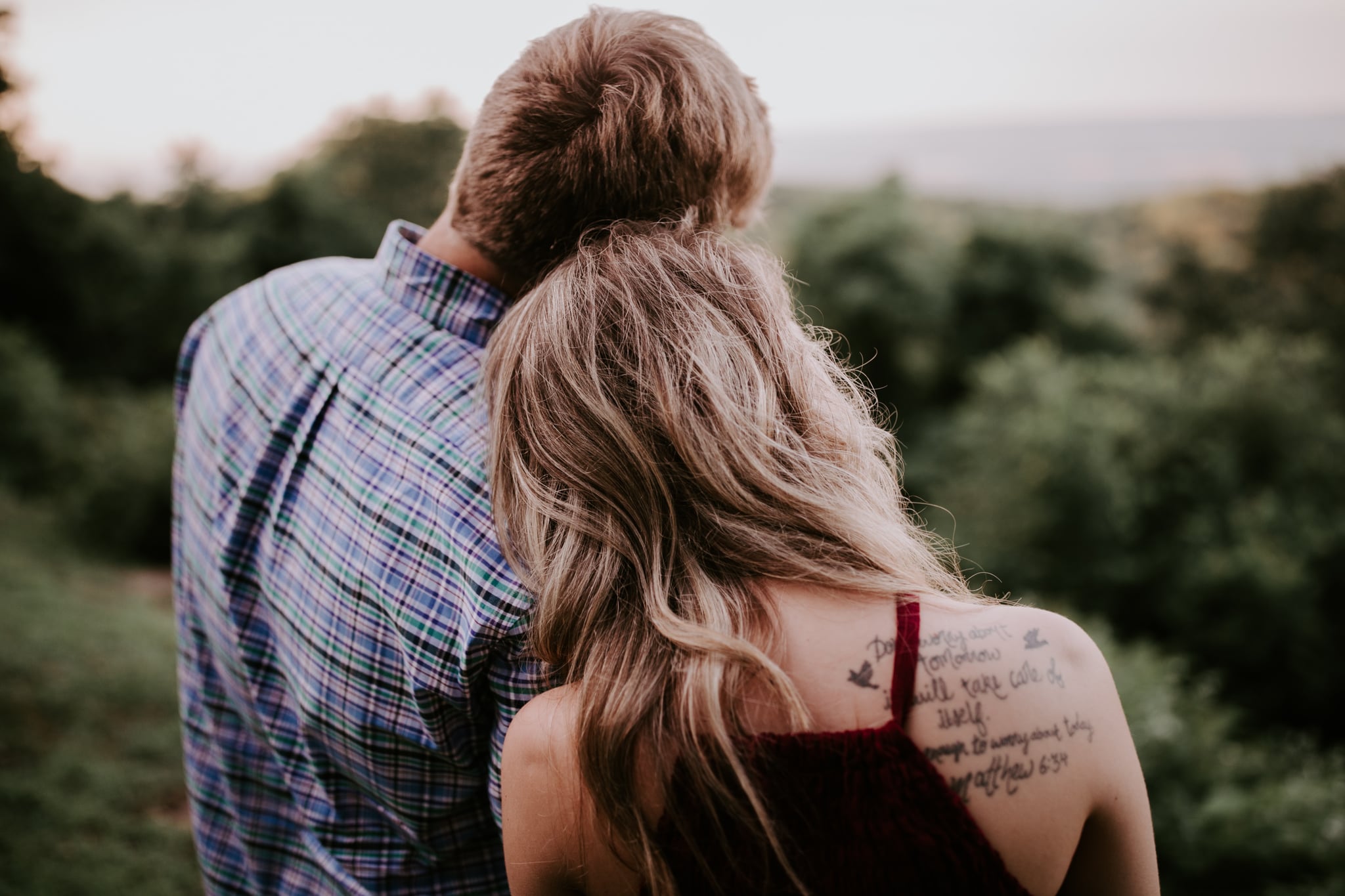 "Babe, something weird happened to me today," my boyfriend said as we sat down to dinner. "I couldn't tie my tie this morning. It's like I forgot how."

It was the middle of February, and life had recently taken us both in some crazy directions. I had just left my full-time editorial job of five years for a new one in public relations for a hospital. The coronavirus pandemic was just picking up steam. I was grappling with a new routine, new hours, new sleep pattern, and new coworkers. He was dealing with a hefty workload on top of being short-staffed, working more overtime, picking up on-call shifts more frequently than usual, and really pushing himself. We were both tired, overworked, and overstressed. But to hear him say this worried me.

"What do you mean you couldn't tie your tie today? You tie a tie every day. I think you need to take some time off because you're obviously beyond exhausted," I responded.

By the beginning of March, the complaints were worse. He was having a problem writing. He couldn't see something I was trying to show him on my phone. He couldn't pour his iced tea from an almost empty container into his glass.

"I couldn't tie my tie this morning. It's like I forgot how," [my boyfriend told me one night]. He passed away four weeks later of a degenerative brain disease.

As we were getting ready for bed one night, he was really not himself and was burning up with a fever, too. Seeing this as my in — there was an actual sign of him being sick — I urged him to see a doctor. I snuggled into his chest as tightly as I could, breathed him in, and held him close to me. I looked up at him, the most handsome man I'd ever laid eyes on, and asked if he was scared. He stared at me for a minute with his brilliant blue eyes and simply said, "Yes." I kissed him deeply and reassured him that, no matter what it was, I had signed up for him and everything life would bring us.

He passed away four weeks later of a degenerative brain disease.

Now I'm left dealing with a hell of a lot of emotions that I never wanted to have in the first place. And the grieving process has been made extraordinarily difficult with social-distancing orders in place — I can't travel, go to SoulCycle, or have dinner with friends or family to forget that I'm sad. I can't cry on my best friend's shoulder. Technically, even hugging my mom is off-limits. And grief — it just attacks when it wants to with no warning signs.

It comes in random flashbacks that, on any other day, would make me giggle, smile, or even blush. It's an onslaught of emotions out of the blue, in the most poorly timed moment, like as I'm just joining a video meeting at my still-new job. It's screaming my lungs out or punching my steering wheel on my commute home. It's lying across the freshly dug dirt at the cemetery, sobbing "How did this even happen? Why you?" Some days, I want to eat all of the things, and others, just the thought of food makes me sick.

My grief also has these moments of calmness and focus, followed up almost immediately with guilt (Why aren't you sad? Do you already not miss him?) or panic (His voice — what did it sound like again? Why can't I remember?). Then there are times when I would expect to burst into tears, like hearing our song on the radio, but instead I'm OK. There is literally no rhyme or reason to anything that I'm feeling right now, and that is just something I need to accept for the time being.

Related:
One of My Close Friends Died, and This Is What It Taught Me About Grief

I am grieving the loss of someone significant. He was the love of my life, and I was smitten with him from the night we met. I am missing his touch, the way he kissed me, his terrible jokes, and how he looked at me deeply and intently even when the room was packed with people. But I am also grieving our future. The new comforter I bought so that the bedroom looked happier when he felt better. Our already-planned trip to Boston. Our next anniversary and the subsequent anniversaries that won't happen. The trip to the Maldives we kept talking about for our next milestone birthdays. Marriage and having babies — all of these things won't happen with him now. Sometimes I catch myself crying more for our future than our past.

Little achievements also aren't so little anymore. Cooking for myself, which is something I did almost every night, seems completely foreign now. Even making eggs — eggs! — seems like such hard work. Folding my laundry, afraid I'm going to come across a piece of his clothing I have yet to put away, has become another challenge. At a friend's suggestion, I ordered Option B by Sheryl Sandberg and Adam Grant. In the book, Sandberg explains that, after the sudden death of her husband, Dave, she began logging daily achievements. Three things she did each day that were hard for her. At first, they were simple things she would have taken for granted before her husband's death, but in time, they became bigger milestones. I'm realizing that she was onto something. I still may not want to fold the laundry, but I can be grateful that I walked my sweet dog a bit longer or I made myself a charcuterie board.

Everything about this situation for me is confusing. Am I single? Technically, yes. But in my mind, he's still my boyfriend. I'm still tied and committed to him. Switching from talking about him in the present tense to the past tense is hurtful, so sometimes I don't make the conversion. Sometimes talking about him brings me joy. Sometimes I wish I never opened Pandora's box. Part of me wants to rush to heal, and part of me wants to hang on to every moment we spent together. I love having his picture next to my bed, but I also don't know what to do with his toothbrush. Do I just leave it there? What about his pajamas or the T-shirts he left lying around? Do I wear them? Do I put them away and never look in that drawer again? I know these answers will come in time, but being in the middle is a really strange feeling.

Everything about this situation for me is confusing. Am I single? Technically, yes. But in my mind, he's still my boyfriend.

My grief also affects others. Right now, I can't do anything right in anyone else's eyes. I've stayed at work, and some of my coworkers think it's strange I haven't taken time off. At first, I wanted to stop freelancing, but just weeks later, I decided I wanted to jump back in, full steam ahead. Even posting and promoting my work on my professional Instagram has gotten weird. Some people think it's too soon for me to be back, to represent some sort of a normal life. But let me tell you how much I care — I don't. No one else was in our relationship. No one else knows what he told me to do before he passed, or how he wanted me to live my life. That is for us. And I can assure you that my life will never be "normal" again.

It's also awkward for my family and my good friends. No one really knows how to approach me or what to say. To ease the burden, I'm telling everyone exactly what I need for the first time in my life. "Hi, I need to chat," I'll text a friend — or multiple friends — when I'm lonely. I'll FaceTime my nieces because I need a laugh. I'll tell my parents to come sit with me. I've even forced myself over to a friend's to have socially distanced cocktails because I needed human interaction. Or I'll tell people I want to be left alone. Laying it out there exactly the way it is in the moment is tough sometimes, but this is my grief, and everyone grieves differently. The people who are closest to me will understand and are probably relieved that I am being so forward.

In a poignant discussion about our past, I once told my boyfriend that even though we were apart for a few months, I never stopped loving him. The love didn't grow because it wasn't being nourished, but it never went away. Now, in his death, I'm realizing that the gaping hole I feel will never go away either. I know that both feelings will change over time as my life takes a new direction and I, like others who have lost someone significant, will have to learn to accept that. There will be growing pains. Wounds will be reopened. I will never be 100 percent whole anymore. But he knew how happy he made me, and I know he would want me to feel that happiness even without him here. Yes, there will be joy again. Maybe even a greater love than the one that was lost. Perhaps just a different love. But the mark he left on my heart will always remain there. While it may seem all sorts of sad and cruel right now, I know one day I'll look back and be grateful.